The Blake family were established in the west of Ireland in the Anglo-Norman period and reputed to be of Welsh origin. The name derives from Richard Cadell or Caddle, who was also known by his cognomen ‘Niger’ or ‘le Blak’’ (ie. ‘the Black’) and whose landed interests appear to have been centred in an area about the town of Galway.

About 1277 he acquired lands of Kiltorroge (modern townland of Kiltroge, parish of Lackagh, near Claregalway) and Ballymacroe (modern townland of Carnmore), near Galway. He was of sufficient standing in the Anglo-Norman lordship of Connacht to be appointed Sheriff of Connacht by the King in 1303 and served as portreeve or ‘port warden’ of Galway in 1290 and again in 1312. Three years later he obtained a grant of lands at Kiltullagh in the parish of Oranmore, near his lands at Kiltorroge and Ballymacroe. Many of his descendants flourished in trade and were involved in the governance of the towns of Galway and Athenry, in particular that of Galway, where they were among the most senior of the ‘fourteen tribes’ of that town.

Hardiman in his ‘History of the Town and County of the town of Galway’ states that the arms most commonly associated with the family, ‘Argent a fret Gules’, was first borne by Richard Cadell alias Blake, sheriff of Connacht in the first decade of the fourteenth century but the evidence upon which this claim was made is unclear.[i] 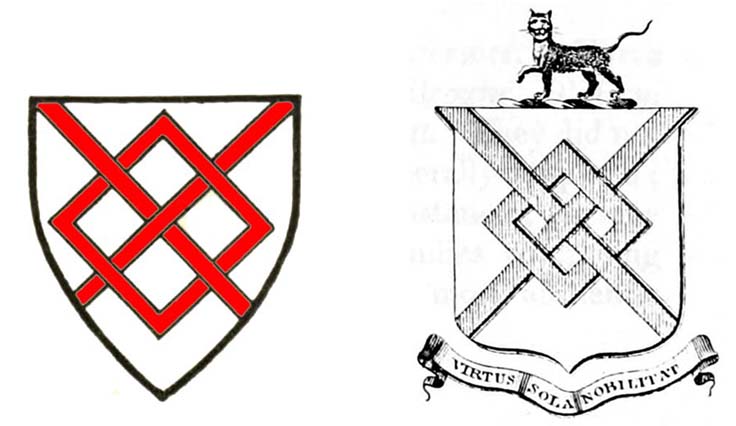 The basic ‘Argent, a fret Gules’ associated with the arms of the principal descendants of Richard Cadell alias Blake (left) and the engraving produced for Hardiman’s 1820 ‘History of Galway’ (right) depicting the arms of Blake among the fourteen tribes of the town of Galway.

An example of the same arms borne by a later member of the Blake family survived into the twenty-first century on Shop Street in the centre of the old town of Galway. This armorial stone, dated 1646, appears to commemorate the marriage alliance of a male of the Blake family, with the initials ‘A.B’ with his wife of the Browne family, initials ‘I.B’ and consists of the impaled arms of both families. That of Blake is on the dexter side and consists solely of a fret dominating that half. Above the impaled arms was carved a closed helmet in profile and atop the helmet a cat statant guardant. Although the cat is shown statant rather than passant (ie. striding with a forepaw raised), the latter is the attitude or stance commonly associated with the crest of later armigerous members of the Blake family. 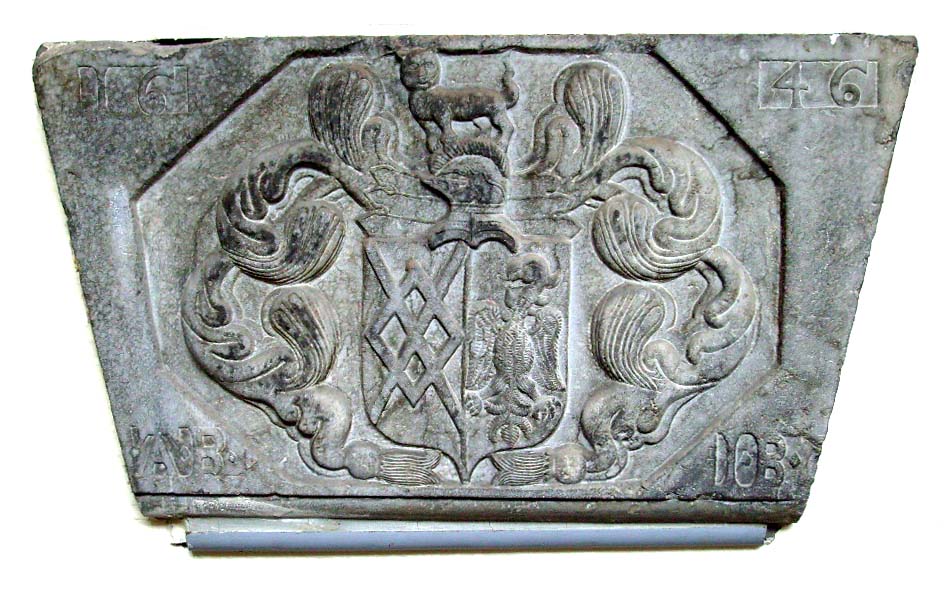 The impaled arms of Blake and Browne, dated 1646, at Shop Street in Galway.

While a cat passant guardant is the crest most associated with armigers of the name Blake, Martin J. Blake noted that a map of the town of Galway engraved circa 1661 with the arms of members of the most prominent families of the town depicted a Blake crest as ‘On a tower Argent a fret Gules.’[ii] 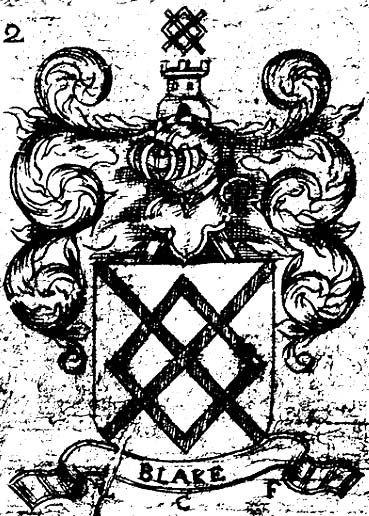 The arms of a Blake family depicted on the margins of a seventeenth century map of the town of Galway, exhibiting an impractical crest of a fret above a tower.

Thomas, a younger son of Valentine Blake by his wife Julian Lynch was ancestor of the Blake families of Menlough, Co. Galway, baronets, of Towerhill in Co. Mayo and of Drum, of Tully and of Gortnamona, Co. Galway. Thomas served as Mayor of the town of Galway in 1545 and 1562 and died in 1574.

Valentine, eldest son of Patrick Blake of Drum, in the barony of Moycullen, Mayor of Galway in 1771, married Anne Burke, daughter of Robert Arcedeckne Burke and through this marriage the Blake family eventually acquired the Burke estate at Gortnamona in the parish of Clontuskert in east Galway.[iii] The will of this Valentine of Tully and Gortnamona was proved in 1821.

The arms of Valentine Alexander Blake, with his seat given as Gortnamona and residence as Bishops Stortford, Hertfordshire in England are given as ‘Argent a fret Gules, and with mantling of Gules and Argent. For crest he bore, on a wreath of the colours, a mountain cat passant guardant Proper and motto ‘Virtus sola nobilitas.’[iv] Born in 1870, he was the son of Valentine Fitzpatrick Blake of Gortnamona, who died in 1870. He served as an officer in the 4th Scottish Rifles in the South African War and married Alison, daughter of Robert Skeet.

He and his wife were buried in Deansgrange, Dublin and commemorated by a memorial bearing the inscription ‘In Loving memory of Valentine Alexander Blake, Major Scottish Rifles, of Gortnamona, Co. Galway and Killiney, Co. Dublin, died 12th December 1923. Also his wife Alison Ann Josephine, who died 16th May 1955.’[v]

For further details on this family, refer to ‘families.’

Blake of Moorfield, parish of Fahy

The Blakes of Moorfield in the parish of Fahy in east Galway were a junior branch of the Blake family established at Ardfry in west Galway.

Peter Blake of Gortnamona, only son of Nicholas, third son of Robert Blake of Ardfry, Co. Galway was among the members of the Roman Catholic gentry who were entrusted valuables by the friars of the Franciscan convent at Meelick in 1698, when the religious under the ‘Banishment of Religious Act’ were ordered to leave Ireland by May of that year.[vi] This Gortnamona would later be known as the townland of ‘Moorfield or Gortnamona’ in the parish of Fahy, where a branch of the Blakes would be seated for a number of generations.[vii] The same Peter, seated at Moorfield, inherited his father’s estates in the baronies of Tiaquin and Ballymoe in County Galway on his father’s death in 1682.[viii]

From the senior line of this branch settled at Ardfry came the Barons Wallscourt. Joseph-Henry Blake, born in October 1765, married Lady Louisa Catherine Mary Bermingham, daughter and co-heiress of Thomas, Earl of Louth, by whom he had an only daughter Anastasia, who married Luke, 2nd Lord Clonbrock and died in 1816. This Joseph-Henry Blake was created in 1800 Baron Wallscourt of Ardfry, a creation with remainder to the heirs male of his deceased father. As the first baron died without a son, the title devolved on his death in 1803 to his nephew, Captain Ignatius Blake and on his demise in 1816 unto the second baron’s first cousin Joseph-Henry Blake. The third Baron Wallscourt of Ardfry bore for arms ‘Argent a fret Gules and for crest, above a coronet of rank ‘a leopard passant Proper.’ As a peer he had for dexter supporter a leopard guardant Proper, ducally gorged and chained Or and for sinister an antelope Argent armed and hoofed Or, collared and chained Gules. He carried for motto ‘Virtus sola nobilitat.’[ix] 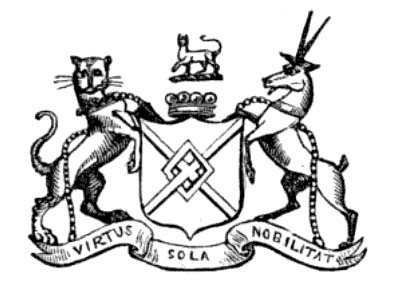 Illustration of the arms of Joseph Henry, 3rd Baron Wallscourt of Ardfry, from Burke’s ‘Genealogical and Heraldic Dictionary of the Peerage and Baronetage of the British Empire,’ 1833.

The achievement and motto borne by Baron Wallscourt, without supporters or coronet, but with a cat a mountain rather than a leopard, was the arms borne by the majority of the senior individuals of the various branches of the Blake family. As such and given their shared descent, it would also appear to have been the basic achievement of the junior branch established at Moorfield in the parish of Fahy.

For further details refer to ‘families.’

A memorial tablet commemorating one Martin Blake and his wife Julian Power was set into the north wall of the choir of Loughrea abbey church in 1732 bearing the arms of the family. Four sons of this Martin and Julian Blake had the stone erected to the memory of their parents. The Blake commemorated thereon died on the 6th May 1731 and was Martin Blake of Loughrea, son of Richard Blake of Kilquain.[x] 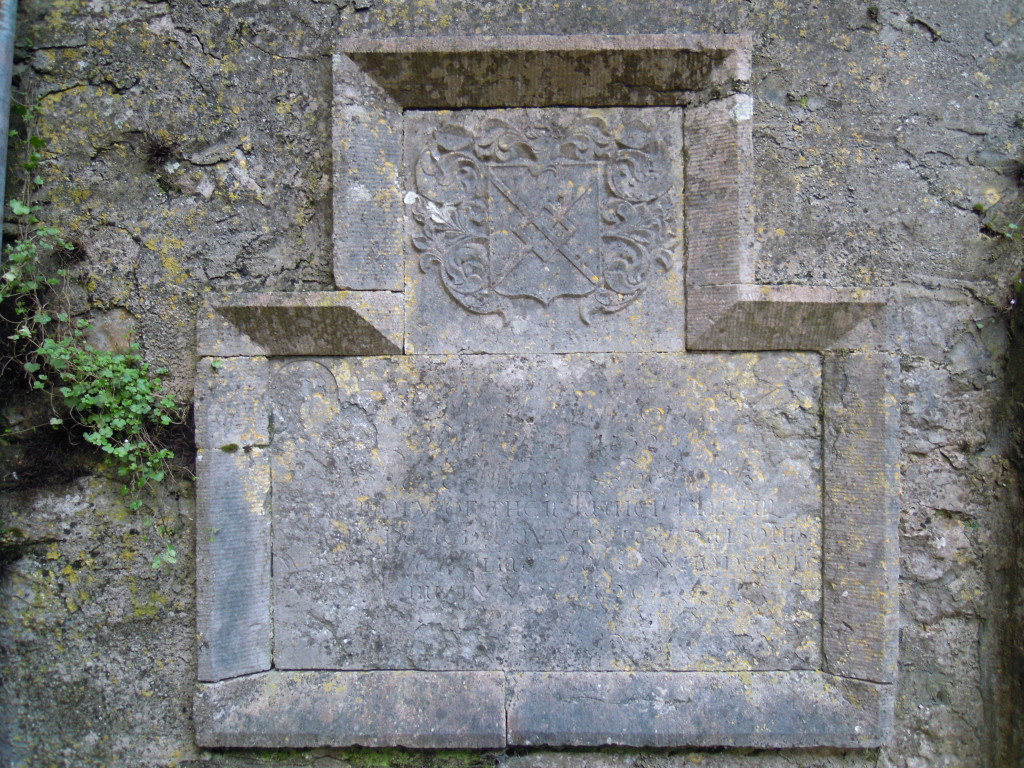 Richard Blake of Kilquain in the years preceding the 1641 Insurrection was seated at Kilquain in the parish of that name in the centre of the ancestral territory of the O Maddens.[xi] He was proprietor of an estate in the barony of Longford in east Galway that comprised lands in the parishes of both Kilquain and Tirnascragh. His lands were confiscated by the Cromwellian authorities in the mid seventeenth century and he appears to have settled thereafter at Loughrea, acquired various properties in and about that town and died sometime after 1695.

This Richard of Kilquain was the elder of at least two sons of Martin Blake, third son of Walter, third son of Andrew son of John Blake. The Blakes of Loughrea and later of Hollypark, near Loughrea, descended from Richard of Kilquain, were a distinct branch from the Blake family who were seated at ‘Gortnamona or Moorfield’ in the parish of Fahy in east Galway in the eighteenth century. This latter branch was descended from an uncle of Richard of Kilquain; Robert, the second son of Walter fitzAndrew Blake.[xii] This Robert, a wealthy merchant of Galway, gave the Abbey of St. Francis at Galway town as the burial place of their ancestors.[xiii] 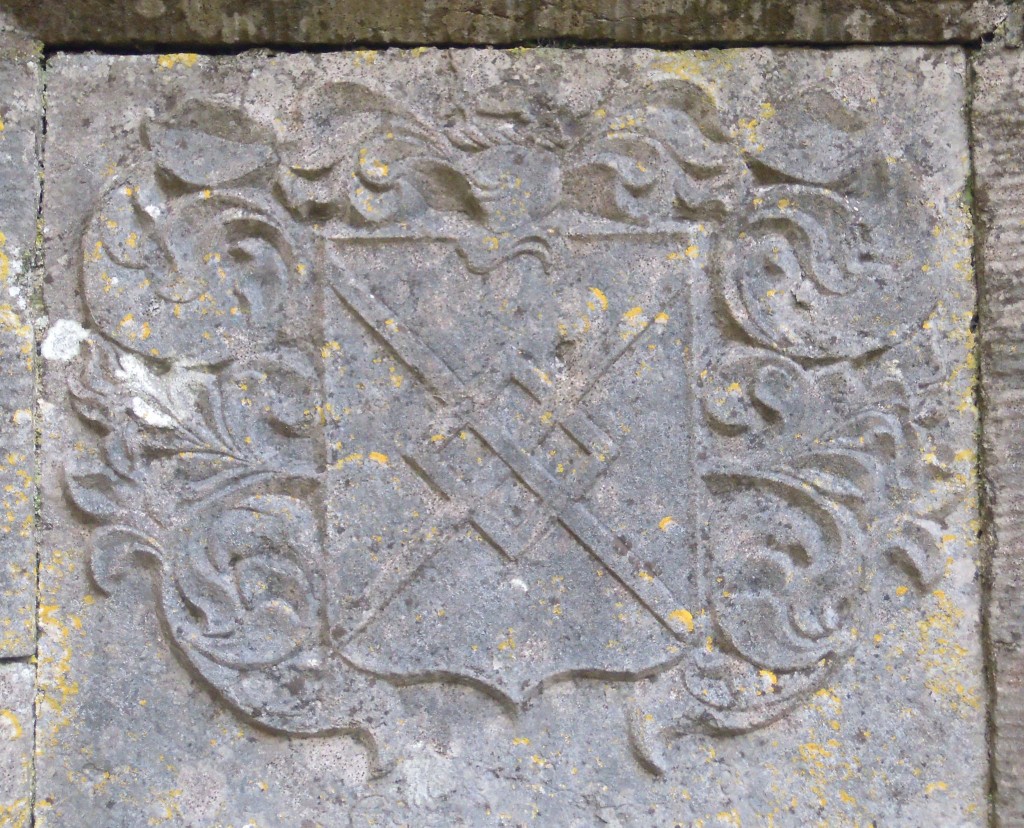 The arms depicted on the 1732 memorial to Martin Blake display a simple fret dominating the shield and above a closed visored helmet in profile, on a wreath, a crest of what appears to be a cat or similar animal passant. The crest by the twentieth century was damaged and defaced, with an elaborate mantle cascading down on either side of the shield from the helm. The armorial bearings did not carry a motto or show surviving evidence of any tincture on the stone. It is likely that the family used the same tinctures common to others of the name with whom they were distantly related, such as the Blakes of Ardfry, consisting of arms Argent a fret Gules and for crest, a leopard or mountain cat passant Proper.[xiv]

The family vault in the abbey at Loughrea was closed sometime about the end of the nineteenth century and the remains of certain of the family were removed to a new grave outside of the church walls. A new headstone, replicating the original eighteenth century inscription, was erected by a descendant over the new grave in 1902.

For further details regarding this family, refer to ‘families.’

[i] Hardiman, J., The history of the town and county of the town of Galway, from the earliest period to the present time, W. Folds and sons, Dublin, 1820, footnote, pp. 7-8. The Cadell, Caddle or Caddell name was used as an alias in conjunction with the Blake surname for a number of centuries thereafter, with individuals of the family still being known as such into the seventeenth century about Galway.

[vii] Another Gortnamona, but in the parish of Clontuskert, was seat to another branch of the Blake family on their intermarriage with a Burke family previously seated there. The marriage between Anne Burke and Valentine Blake which resulted in the establishment of the Blake family in that particular Clontuskert estate did not take place until 1797.

[xi] The parish of Kilquain, in the diocese of Clonfert, was later also known as the parish of Quansboro.

[xiii] Blake, M. J., Blake Family Records 1600-1700, Second series, London, Elliot Stock, 1905, Appendix A. The will of Robert Blake fitzWalter fitzAndrew, Galway, merchant, dated 3rd July 1612. ‘My body to be buried in St. Francis Abby with my ancestors’ and he bequeathed 10 marks towards the repair work on the fabric of the St. Francis’ Abbey, ‘specially of my ancestors chapel.’