The Cuolahan or MacCuolahan family were of ancient descent in Síl Anmchadha and it has been suggested that they at one time may have been rulers of the territory of Síl Anmchadha prior to the O Maddens. Their ancestral lands lay about Ballymaccoolaghan in the parish of Lusmagh, the only part of the O Madden territory of Síl Anmchadha which lay on the eastern side of the River Shannon. The O Madden territory formed the easternmost part of the County Galway after that county was created as an administrative unit in the Tudor period and as Lusmagh had formed part of the former O Madden territory, it was the only parish within the confines of County Galway to lie on the eastern bank of the Shannon. About the middle of the seventeenth century Lusmagh was separated from County Galway and included as part of King’s County. Senior members of the Cuolahan family converted to Protestantism in the eighteenth century and the family managed to retain a presence on their ancestral lands into the early twentieth century, as tenants of the lands of Cogran, which once formed a small part of the larger denomination of Ballymaccoolaghan.

The head of the family in 1843 was given by the noted antiquary John O Donovan as Henry Cuolahan Esq. of Cogran House, at that time the twenty-six year old second son of Daniel Cuolahan of Cogran and described by O Donovan’s contemporary and acquaintance Richard Monck as ‘the present MacCuolahan.’ The only other family of the name Cuolahan known with any certainty to be closely related to the family of Cogran, sharing a common descent from one Doctor John Cuolahan who died in 1761, were the Cuolahans of Ashgrove, also in the parish of Lusmagh.[i]

The earliest widely-read publication detailing the arms of the Cuolahans was John O Donovan’s ‘Tribes and Customs of Hy Many,’ published in 1843.[ii] O Donovan’s sole informant regarding the arms of the Cuolahan family appears to have been his former Latin and Irish tutor Richard Monck, resident for a time at Banagher, King’s County in the middle of the nineteenth century. Monck not only resided in close proximity to the Cuolahans but described himself as an intimate acquaintance of Henry Cuolahan of Cogran House. 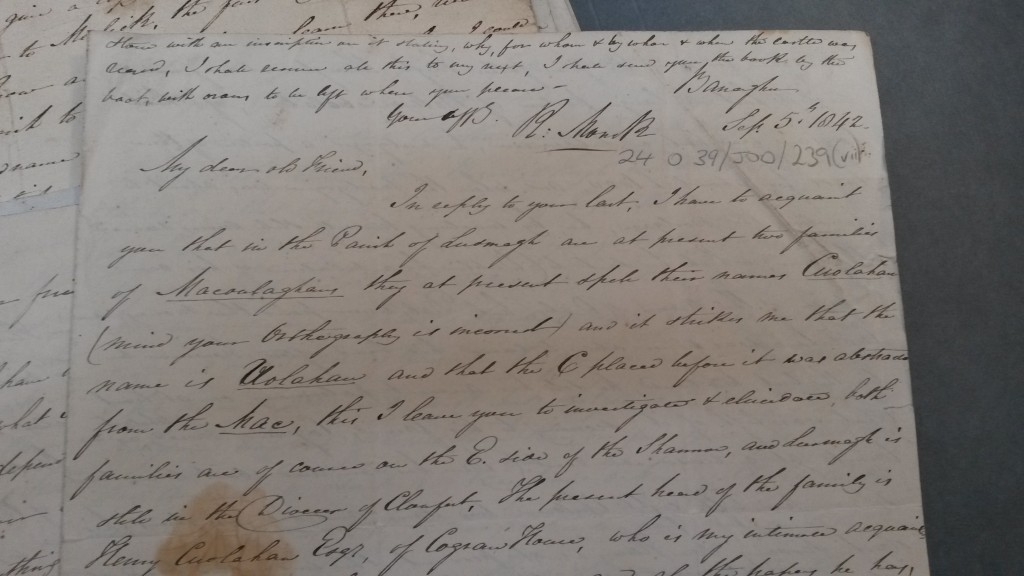 Extract from Richard Monck’s letter, written at Banagher on 5th September 1842, addressed to his ‘dear old friend’ John O Donovan, in which he relates the blazon of the arms used by the Cuolahans of Cogran House. © RIA Library, Dublin.

Although Monck described Henry Cuolahan as possessed of significant pride of family, he was ignorant of his family’s history or origins and could tell Monck ‘nothing of his family beyond his near progenitors and it was only from his family papers that (Monck described himself as) able to make out the trifling intelligence’ that he had sent to O Donovan in a letter dated 5th September 1842.  In that letter, addressed to his ‘dear old friend,’ Monck outlined the arms of the family as ‘Argent, a lion passant guardant between two bars Gules, in chief three crosses fitchy of the second, and in base a pheon Azure.’[iii] For crest, a dexter arm vested Gules, bent at the elbow, hand naked brandishing a sword Proper, and for motto ‘Snadh na sean.’ 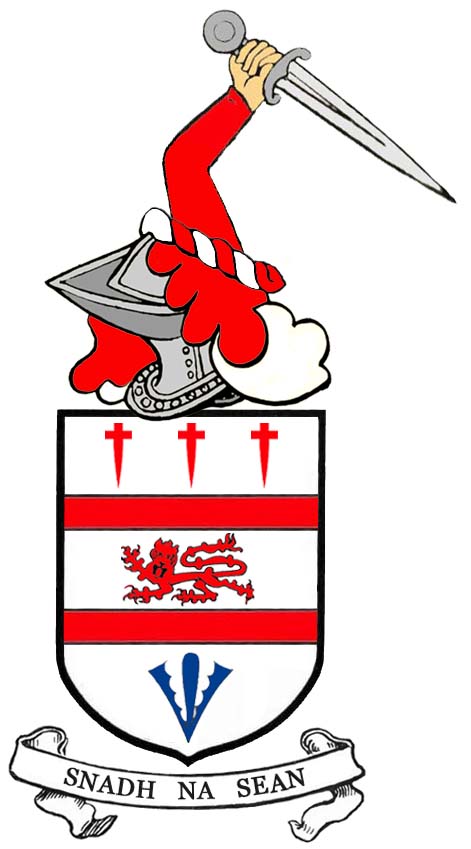 The arms of Cuolahan of Cogran House in the parish of Lusmagh, as described by Richard Monck in the mid nineteenth century.

The origin of the motto is obscure and was unknown to the family with any degree of certainty. Monck initially considered that it may have meant an ‘offshoot from, or of, John,’ on the basis that ‘sean’ in this case was the Christian name Sean, Seaan or Shane, translated often as ‘John.’ The family translated the motto as ‘tuft of pleasure,’ a translation which Monck stated was given them by an itinerant antiquarian at some stage.[iv] Neither translation appears to be satisfactory and it is possible it may have been a poorly rendered version of three Irish language words which could be translated as a ‘binding knot’ or ‘linking connection with one’s forebears.’[v]

On the night of the 11th September 1842, six days after his first letter to O Donovan regarding the Cuolahans, Monck called upon the Cuolahans at Cogran House, where the family he said laid out their family papers before him and from which he sent detailed information to O Donovan the following day.[vi] With regard to their family’s arms, Monck informed O Donovan that ‘they know nothing of them.’ It was Monck’s supposition, not based on any particular evidence, that ‘it was Dr. John (Cuolahan), who appears to have been the most aristocratic member of the family, that got them manufactured or otherwise about 1754.’[vii]

Pedigree of the Cuolahans of Cogran and Ashgrove, with female members omitted, showing their descent from Dr. John Cuolahan, who conformed to Protestantism in 1754 and died in 1761.

O Hart, however, gives the arms of the family he describes as ‘O hUallachain of Siol Anmchadha’ as ‘Azure, two lions Argent supporting a castle (recte: a tower) of four turrets of the second Or, in the centre chief point a cross Gules, in base two crescents Argent and in chief three annulets Gules. For crest he gives ‘a demi-savage, handcuffed.’[viii] These arms would appear to have no connection, however, with the family of Cuolahan of Cogran. O Hart described the family name as prefixed by an ‘O’ rather than the correct ‘Mac’ prefix for the family of Síl Anmchadha and these arms, or a variation thereon, are elsewhere attributed to the name of O Holohan and described as ‘Azure a tower Or supported by two lions rampant Argent, in base two crescents of the last, on a chief of the third three annulets Gules.’[ix]

Henry Cuolahan of Cogran died in 1848 but the Cuolahan family were still resident at Cogran in 1901 in the persons of his younger brother Bigoe Armstrong Cuolahan, a retired farmer and his wife Rebecca. Bigoe A. Cuolahan died in 1902 and nine years later Rebecca, as head of the house, was the sole Cuolahan resident at Cogran. By the late twentieth century the house was in a ruinous state.

Refer to ‘Families’ for further details of this family.

[v] On the basis that ‘snadh’ may have been intended as the modern ‘snaidhm’ or ‘a binding knot’ and ‘sean’ ‘forebear’ or ‘ancestor.’