The arms of the town and later the city of Galway have altered significantly down the centuries. The earliest known appears to be a variation on the arms of the Mortimer Earls of March and Ulster, who through marriage inherited the former de Burgh lordship of Connacht, if not entire control over the same or entire access to the revenues therefrom. The use of these arms associated what was one of the principal urban settlements of the Connacht lordship with the lawful absentee heirs to the lordship as opposed to those gaelicised chieftains or magnates who held sway over significant areas of the lordship in opposition to English law.

A mid seventeenth century Pictorial Map of Galway town gives three different armorial bearings for Galway town, used at various times. The earliest the map describes as ‘the most ancient arms of Galway’ and was portrayed as ‘quarterly first and fourth Or a cross Gules (for de Burgh), second and third ‘Barry of six, Or and Azure, on a chief of the first, three pallets between two base esquierres dexter and sinister of the second, over all an inescutcheon Or’ (for Mortimer.). While the de Burgh arms occupy the first and fourth quarters on the map, Hardiman in his history of the town and surrounding area describes the arms as quarterly but with Mortimer occupying the first and fourth quarters and de Burgh the second and third. In this case the inescutcheon Argent of Mortimer was shown as ‘Or’ on the map. 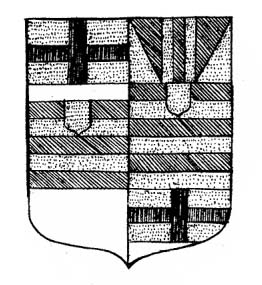 The arms identified as ‘the most ancient arms of Galway’ from the Pictorial Map of Galway. (c) James Hardiman Library, NLI, Galway.

As Martin J. Blake pointed out, these arms could not predate the marriage in 1368 between Philippa, daughter of Lionel Duke of Clarence and Earl of Ulster and Edmund Mortimer 3rd Earl of March.[i] On the death of Philippa’s father later that same year without any other heir, the former de Burgh estates of Ulster and Connacht passed to Mortimer, in right of his wife, who was then created Earl of Ulster. The arms of Galway that incorporated the quartered arms of de Burgh and Mortimer cannot have been earlier, therefore, than 1368.

The common seal of the town of Galway bearing these arms, combining those of de Burgh and Mortimer, was attached to a deed dated 1445 and Blake was of the opinion that these arms continued in use by the town until about 1485.[ii] Hardiman, writing about 1820, states that these quartered arms ‘continued to be occasionally used in the official proceedings of the corporation of Galway, even so late as the last century (i.e., the eighteenth century).’[iii] This does not preclude the use of both simultaneously or the continued use of the oldest arms on certain documents when more recent bearing would have been more correct. 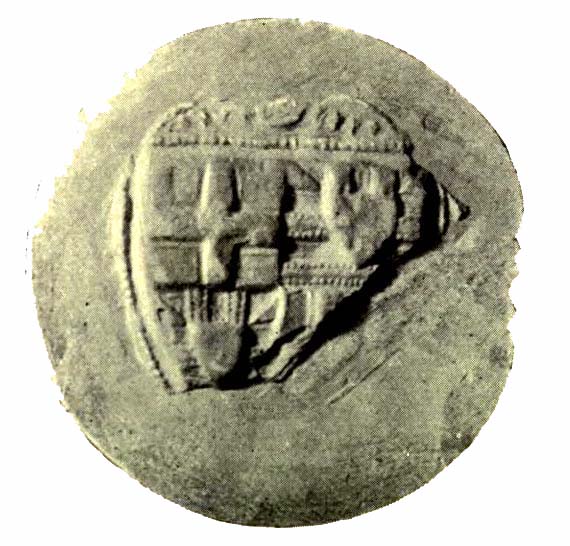 Fragment of the common seal of the corporate town of Galway appended to a deed of award dated November 10th 1445, from ‘Blake’s Family Records 1600-1700,’ exhibiting the quartered arms of de Burgh and Mortimer.

The mid seventeenth century Pictorial Map gives two other arms for the town of Galway, one that it describes as ‘the old arms’ and the other ‘the more recent’. The old arms, therefore, would appear to have been granted to, or adopted by, the town sometime after the quartered arms of de Burgh and Mortimer. The ‘old arms’ were described as ‘Azure a chevron Or between three castles, triple-towered and masoned Argent.’[iv] The castles, however, appear on the map more akin to town gates or at least triple-turreted towers than castles, each tower drawn with a stepped base, crowned by a steep roof and the gate openings of which depicted with a raised drawbridge, on either side of which appear a lion rampant. Hardiman was of the opinion that these were in use from 1396 but Blake was of the opinion that they first came into use after the grant of a charter to Galway by King Richard III in December of 1485, in which charter the town’s chief magistrate was first created Mayor. Blake believed that the granting of new arms to the town may have been associated with the grant of the charter, by which time the town had also been further fortified by additional wall defences. In making his case, Blake noted the similarity of the arms of the Lynch family, dominant in town governance and politics at the time of the granting of the charter. Part of the basic elements of the Lynch arms were a chevron Or upon a field Azure, the same field and ordinary in use as the ‘old arms’ of the town.[v] 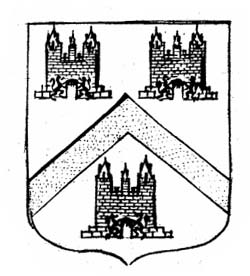 The arms identified as the ‘old arms’ of Galway on the Pictorial Map of Galway. (c) James Hardiman Library, NLI, Galway.

It was Blake’s opinion that these arms were in use until 1578, in which year Queen Elizabeth I granted another charter to the town of Galway in July of 1578. He believed that to make the granting and provisions of this charter, new arms were granted to the town, those new arms described on the seventeenth century Pictorial Map of Galway as ‘the more recent arms’. The ‘more recent’ arms reflected the importance of the maritime aspect of the town’s economy, being ‘ Argent, on the waves of the sea in base Proper, a galley Or, with sails furled and pennant Sable, on an escutcheon of the last a lion rampant of the third.’ Blake described the arms as being thus blazoned during the reign of Queen Elizabeth, in an armorial register formerly held in the then office of the Ulster King of Arms, dating from the period in office of Christopher Ussher, Ulster King of Arms from 1588 to 1597, suggesting that these arms may have been in use by the town by about the later years of the sixteenth century.[vi] The arms on the Pictorial Map reflect this blazon to a significant degree but with the shield surrounded by a bordure dancettée. 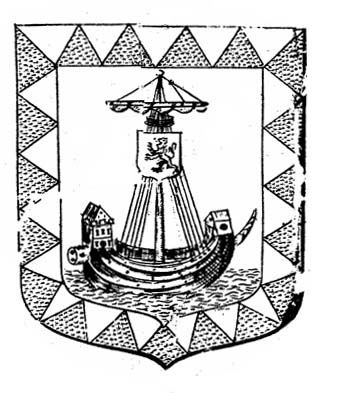 Arms identified as the ‘most recent’ arms of Galway on the seventeenth century Pictorial Map of Galway (c) James Hardiman Library, NLI, Galway.

The ‘armorial register’ to which Blake made reference would appear to be the manuscript later known as Genealogical Office Manuscript number 37, formerly part of Ulster’s records.[vii] Entitled ‘Irish Arms A,’ it contains three Alphabets of Arms, with the date of 1578 given on the first pages and the date 1594 in pencil by a later hand. The arms contained therein, however, are mostly those of English families, with a small number relating to Irish families, principally of Old English origin. Also contained therein are Funeral Entries relating to the year 1595 and three pedigrees. The manuscript itself is believed to date from the last years of the sixteenth century or about 1600. The arms of ‘Galwaye a port towne’ appear early in the manuscript and as described by Blake, with minor differences. The principal difference between the arms in the manuscript and that on the Pictorial Map is the inclusion of a pennant and crows-nest Sable in the manuscript and the opposite direction in which the galley is facing. The writing above the entry is similar to that employed by the individual who compiled the late sixteenth century or early seventeenth century entries and appears to pre-date the handwriting of Richard Carney, Ulster King of Arms in the late seventeenth century. 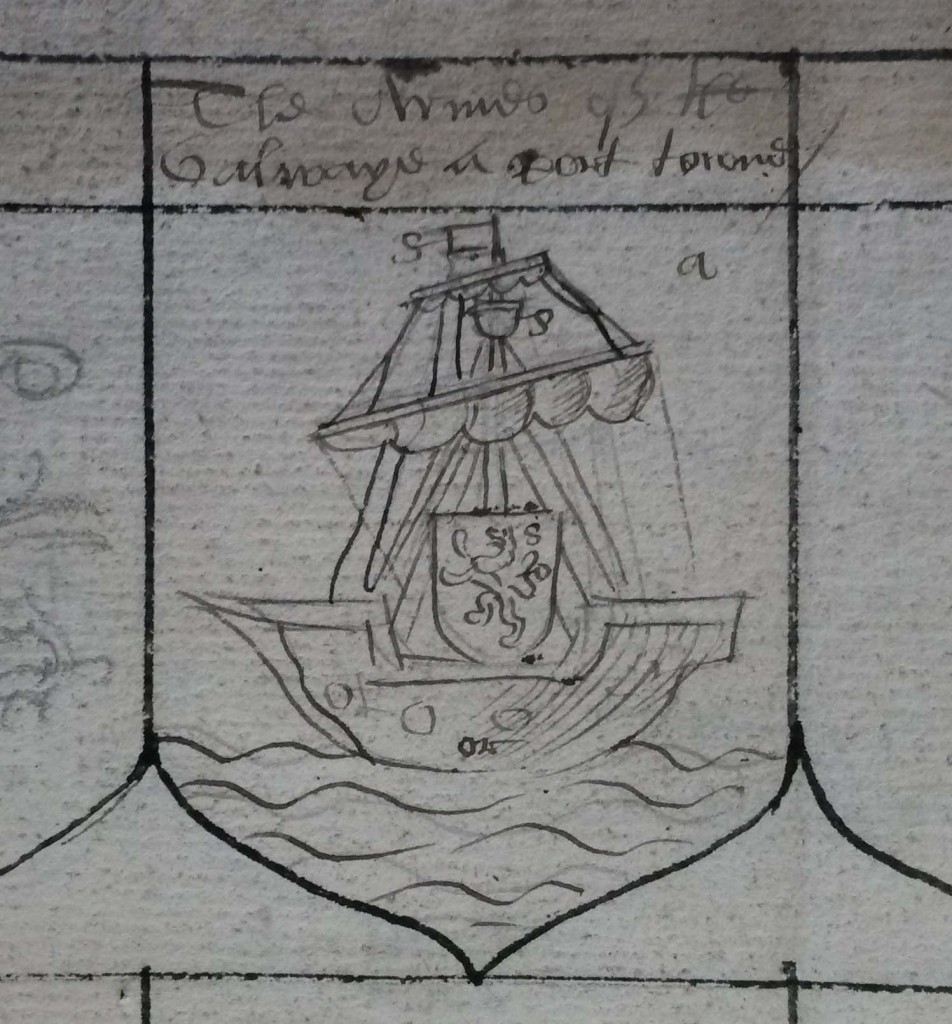 The arms in which the shield-bearing galley occurs as the principal charge were in use by the civic authorities by the mid seventeenth century. Four stone armorial plaques exhibiting these same arms and believed to date from the 1640s survive in the modern city of Galway.[viii] One of these, bearing a date of 1647, is believed to have originally been set into fortification works added to the town walls at that time. The same panel included an inscription to the effect that ‘THIS . FLANKER . AND . WOORK . WAS . BUILT . IN . THE . YEAR . OF . JOHN . BLAK . FITZ . NICHOLAS . ESQUIRS . MERALTY . DOMINICK . BLAK . AND . NICHOLAS . BODKIN . SHERIFS . UPON . THE . COMON . CHARGES . OF . THE . CORPARATION . AND . COMONALTY .’ This particular flanker or tower was known as Shoemaker’s Tower or New Tower, located at the south eastern corner of what was then the town walls. The works formed part of modern bastion defences added to the town walls executed prior to the siege of Galway by Cromwellian forces between August 1651 and May 1652. The plaque was moved on several occasions until it was purchased for the Library of University College Galway and in 1972 was given on loan to Galway City Museum.[ix]

The heraldic ship, which Franklyn explains may be described as either a lymphad or galley, is described by the same as ‘antique, conventionalised and romanticized. The bottom from stern to stern it is semi-circular, is provided with towering castles fore and stern; has only one mast, on which a square mast is furled unless blazoned as spread, and four oars by the side.’[x] Other sources give the difference between an ancient galley and a lymphad as the former having three masts, furled or unfurled, with either the oars in action or otherwise while the latter being the same but sporting only one mast.[xi]

These last arms have continued in use by the town into the twenty first century. 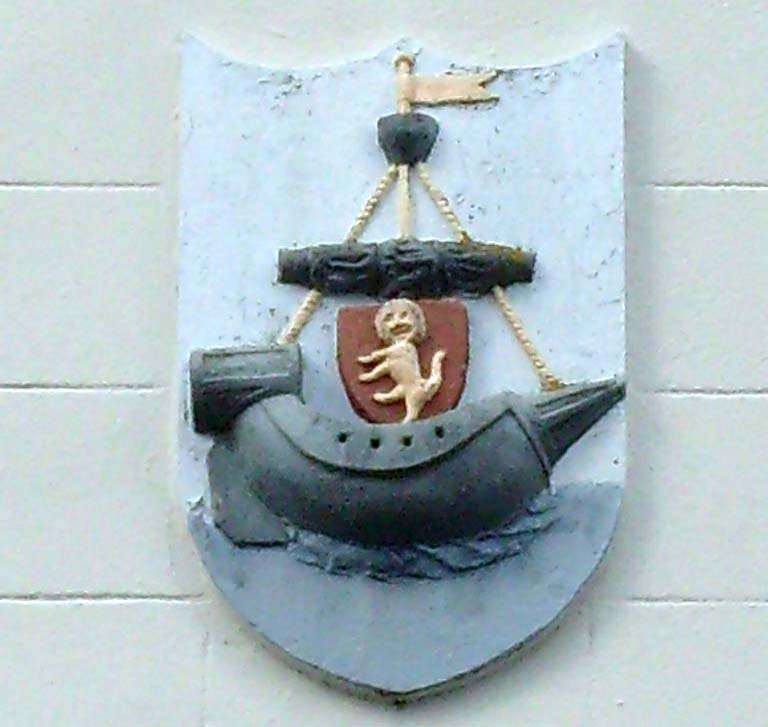 The arms of the town of Galway displayed at second floor level on the front elevation of a three storey building on Middle Street in the town, the headquarters of the Galway Mechanics Institute in 1838.

[iii] Hardiman, J., The history of the town and county of the town of Galway, from the earliest period to the present time, W. Folds and sons, Dublin, 1820, footnote, p. 57.

[v] Blake, M.J., Notes on the Map of Galway, J.G.A.H.S., Vol. IV, 1905-6, No. i, pp. 45-48.This would presuppose that the arms used by this family of Lynch were in use by them at this time and not adopted at a date after the ‘old arms’ were in use by the town. The arms of the members of this Lynch family were ‘Azure a chevron Or between three trefoils slipped Or’, arms displayed on various armorial stones on buildings about the old town of Galway.