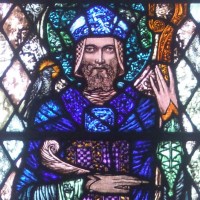 I’ve passed through the nearby village of Kiltormer and its small Roman Catholic church regularly, unaware of the beauty within. Recently, however, curiosity led me to stop and venture inside. 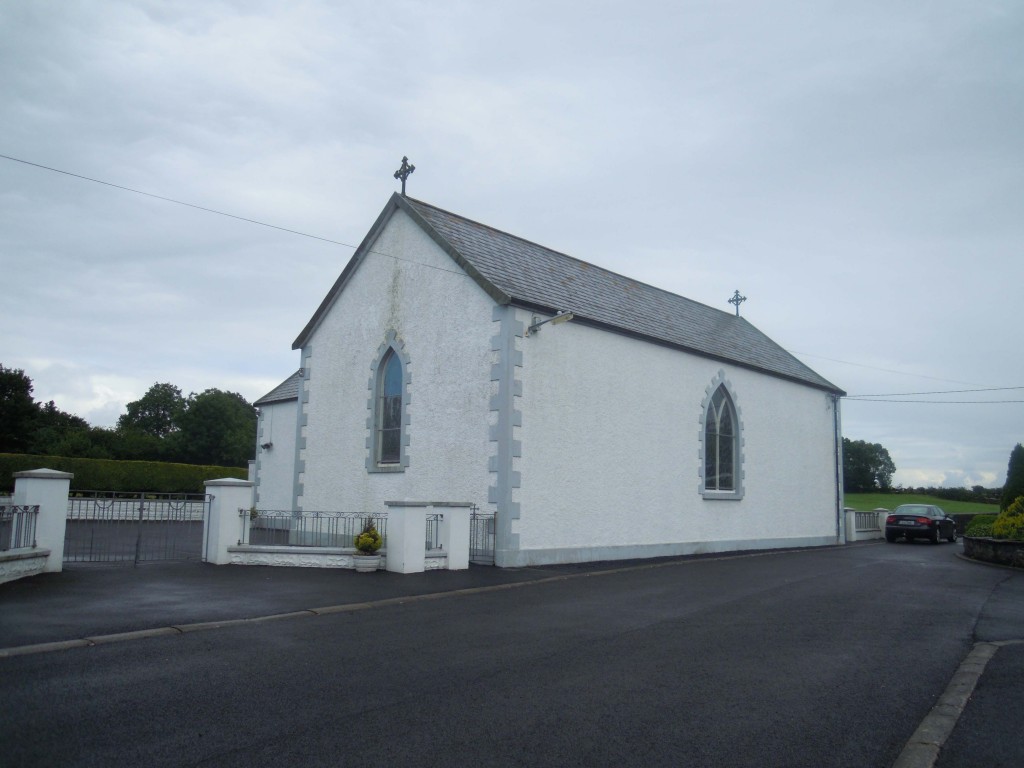 The building itself is a simple structure, built in the early decades of the nineteenth century with little adornment but on entering I was surprised to find myself confronted by three beautiful stained glass windows. As I walked up to one, admiring the deep rich colours, long elegant almost emaciated figures and spare faces, I thought surely this couldn’t be the work of Harry Clarke, Ireland’s most celebrated stained glass artist. I gazed further and there in the bottom right hand corner was the signature ‘Clarke, Dublin.’ 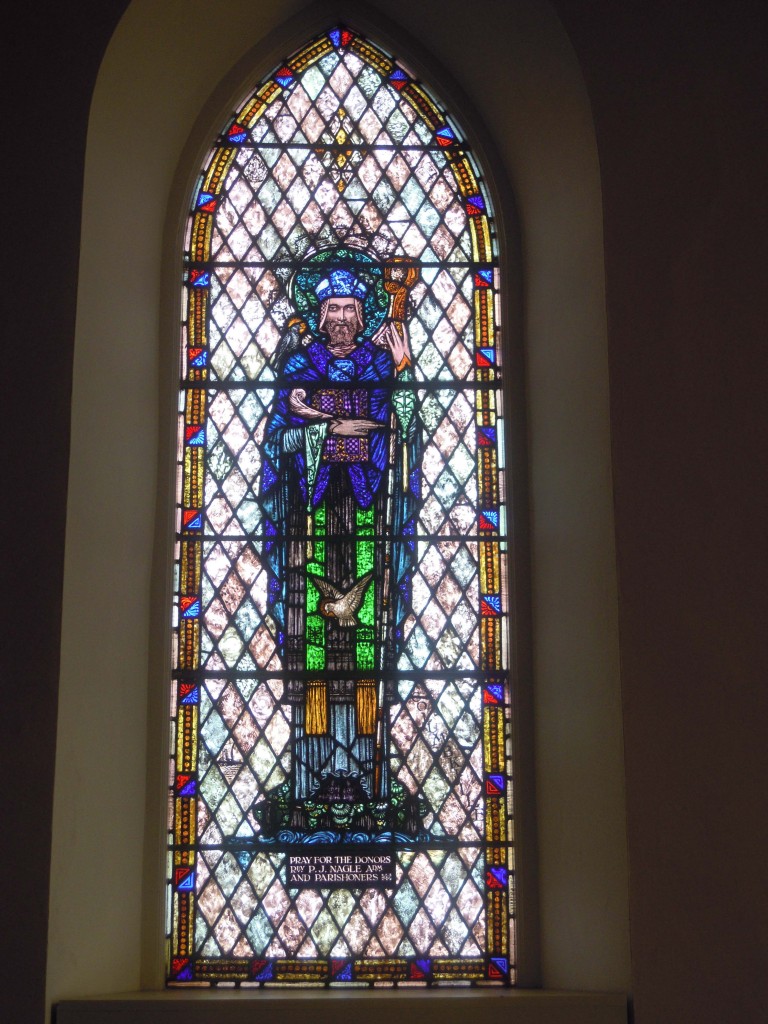 St. Columbkille, one of the most important early Irish missionary saints, who founded the famous monastery of Iona in the sixth century. 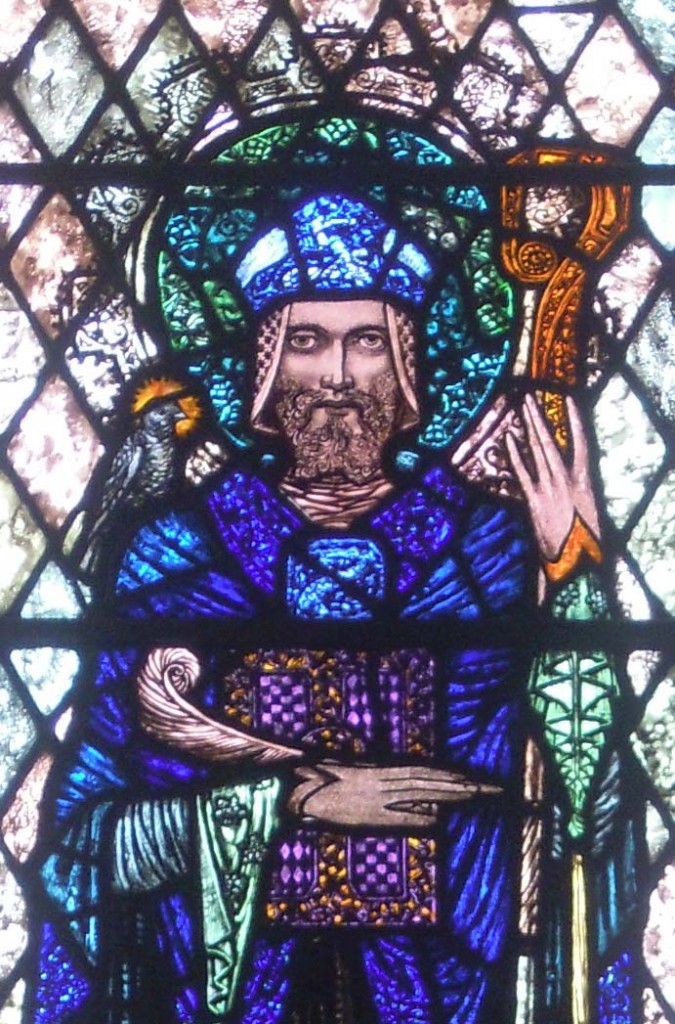 Detail of St. Columbkille, showing some of the rich colours and textures, elongated fingers and almost trance-like stare typically seen in Clarke’s work. 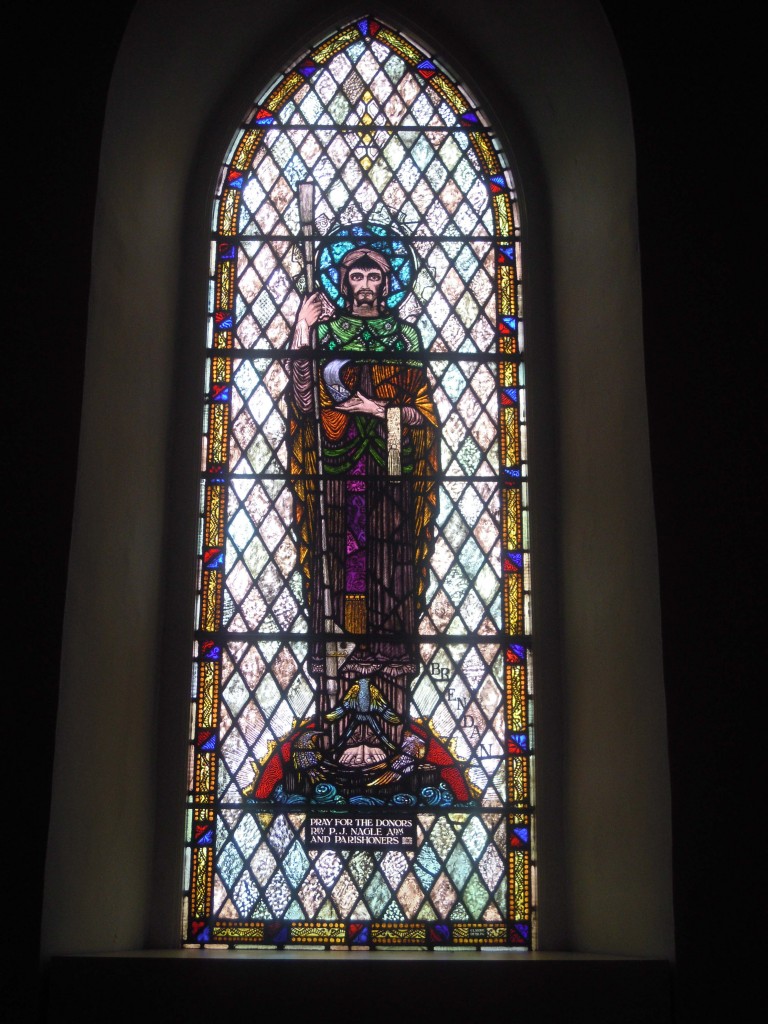 St. Brendan the Navigator, patron of the Roman Catholic diocese and contemporary of St. Columbkille, who founded an important early Irish monastery at Clonfert in the sixth century from which the diocese derived its name. 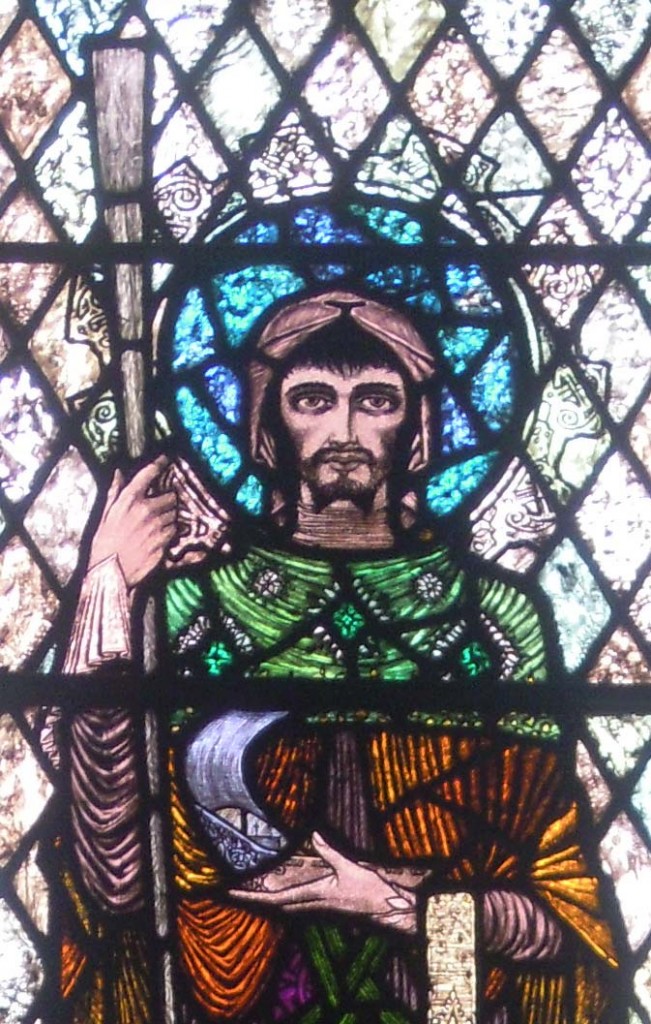 Detail of St. Brendan the Navigator, exhibiting the spare facial features visible in much of Clarke’s work. St. Brendan carries a boat and oar, a reference to his reputed voyage to the Isle of the Blessed, believed by some to have been the New World or North America. 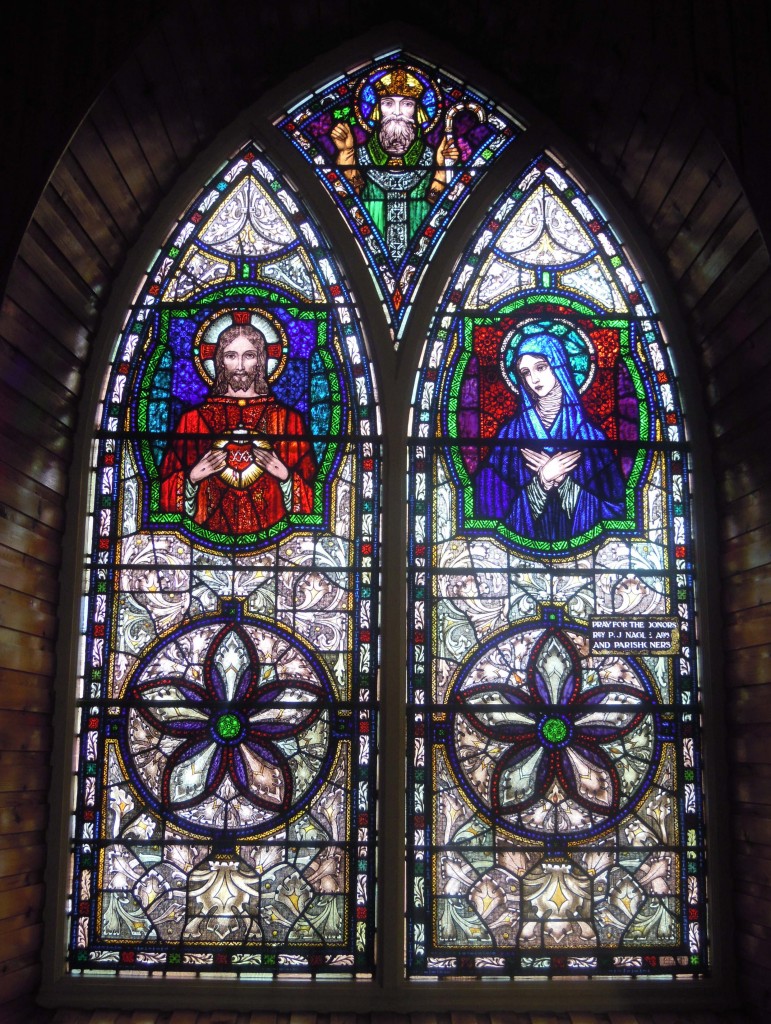 The principal window, behind the altar, in the south gable of the church, displaying images of the Sacred Heart, the Blessed Virgin Mary and St. Patrick. Details of the decoration of this window appear to be more traditional than that of the accompanying windows portraying St. Columbkille and St. Brendan the Navigator. 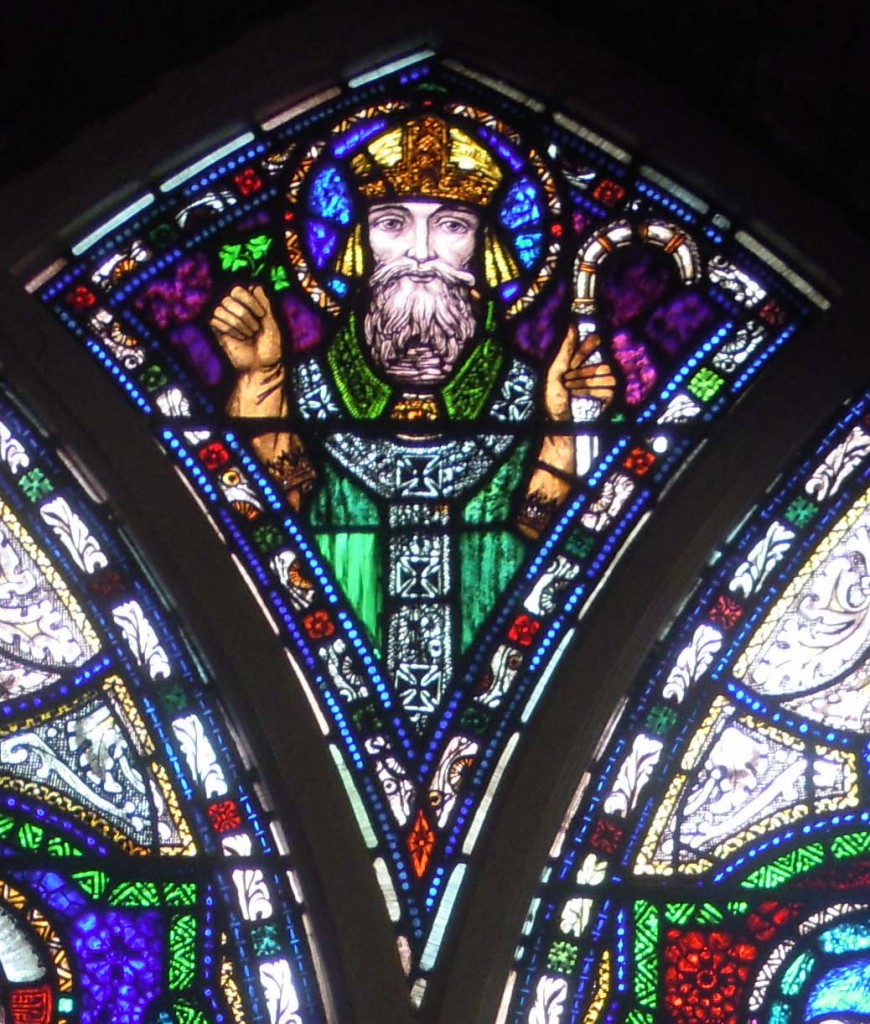 Detail of St. Patrick, to whom the church is dedicated and whose name is associated with the holy well known as ‘Toberpatrick’ in the village, located immediately to the east of the church. 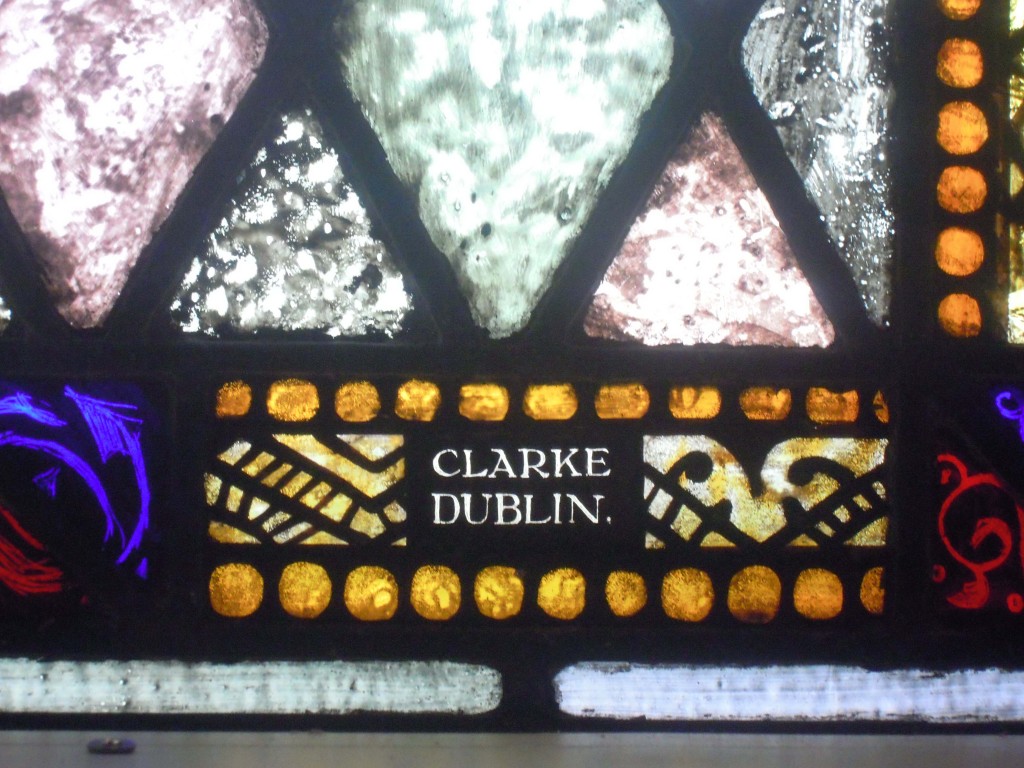 Hailed as an artistic genius, Harry Clarke died in 1931 at the age of about forty one years. In that short life he created somewhere in the region of one hundred and sixty stained glass windows for churches and other buildings in Ireland, England and further afield. In the east of County Galway he is known to have executed windows in St. Michael’s Roman Catholic church in Ballinasloe depicting St. Patrick and St. Rose of Lima about 1925, while other examples of his style can be found at the churches in Kilnadeema and Glenamaddy. Both of these, however, appear to have been undertaken by his studio after his death. 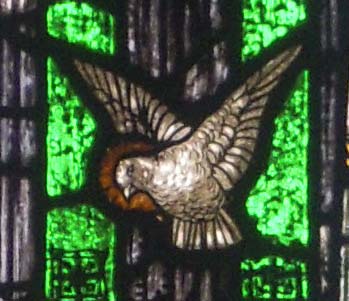 Detail of a dove from the window of St. Columbkille, ‘columb’ being the Irish word for ‘dove.’ 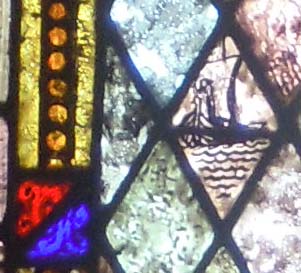 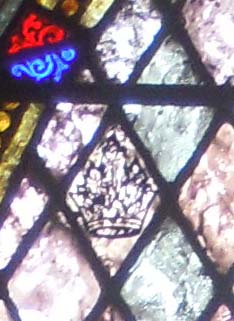 Details from the window of St. Columbkille, including that of a boat under sail, a possible reference to his voyage with a small number of companions to the small desolate rock off the coast of Scotland where he founded the monastery of Iona.

Not being an expert in the field, I cannot say for certain that those in Kiltormer were produced by the artist, under the artist’s direction or later, in his absence, by his studio but the commemoration of the client, Fr. P. J. Nagle, Adm., on the windows would indicate that these were commissioned between 1924 and 1946, during his period as Administrator (the near equivalent of Parish Priest) of the parish. This would rule out the possibility that it was undertaken by Harry’s father Joshua, who founded the family business but died in 1921. Irrespective of whether these windows are the work of Harry Clarke directly or that of his studio, their simple beauty is undeniable and an architectural and artistic treasure in the parish and diocese. 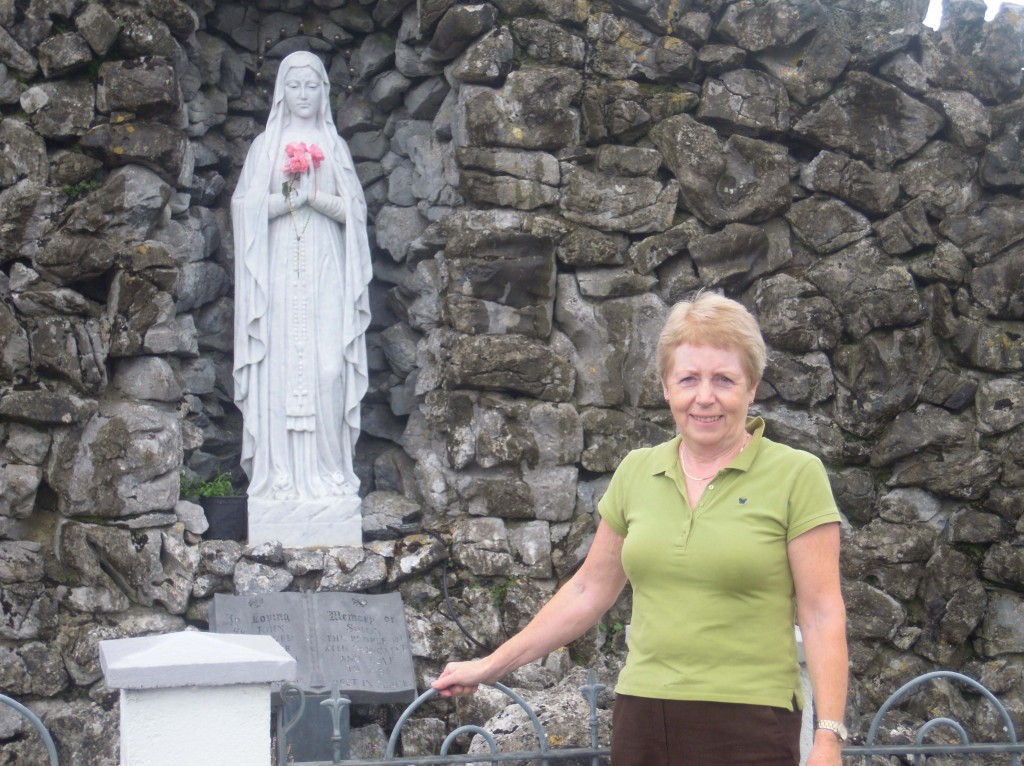 Fran Jennings, one of the ladies of the parish who generously give of their spare time to maintain their local church. Fran was busy at work in the church when I arrived and it didn’t take us long to strike up a conversation. Within a minute we discovered that we knew each other’s family but had never met previously. Fran lives between Kiltormer and Lawrencetown now but originally hails from my own combined parish; that of Clonfert, Eyrecourt and Meelick and it transpired that I knew her brother Sean Treacy from Meelick and went to school years ago with her nephew. You don’t have to travel far to meet or make a friend in east Galway.

Lady Day and Festival at Athenry
The Cross of Cairbre Crom