There is no evidence of officially registered arms in the records of the Ulster King of Arms relating to representatives of the Lorcan or Larkin family of east Galway. This, however, does not imply that heraldic arms were not utilised by the senior-most members of the name. The only evidence that arms were used or claimed by the Colohans of Cogran and Ashgrove in King’s County is the description of those arms in a letter written in 1842 to the antiquary John O Donovan by an old acquaintance familiar with the family. Similarly, there is physical evidence from a headstone in the ruins of the Franciscan friary of Kilconnell in east Galway that the family of Ward of Ballymacward claimed or used arms that were never officially recorded or confirmed in Ulster’s Office and the same may be said of the Larkins. The only known surviving evidence of their use of armorial bearings is found on an eighteenth century armorial headstone.

In the grounds of what was once the family chapel of a senior line of the Larkin family of Síl Anmchadha at the Franciscan friary in Meelick, an eighteenth century armorial headstone survives to the memory of Anthony Lorcan who died in 1744 and his wife Elisabeth McDermott. The arms are without tincture. On the dexter half of the shield is depicted an elongated cross, its arms and head pattée, its shaft regulée and on the sinister side a lion rampant. 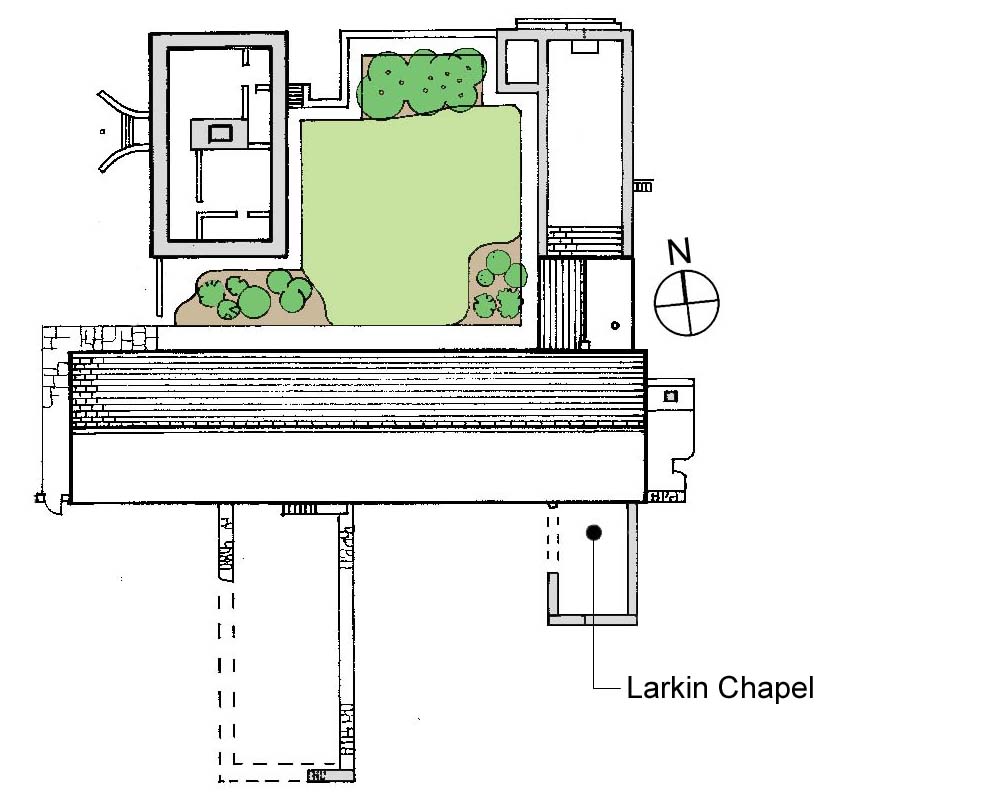 Location of the remains of the Lorcan or Larkin Chapel at Meelick Church, parish of Meelick. 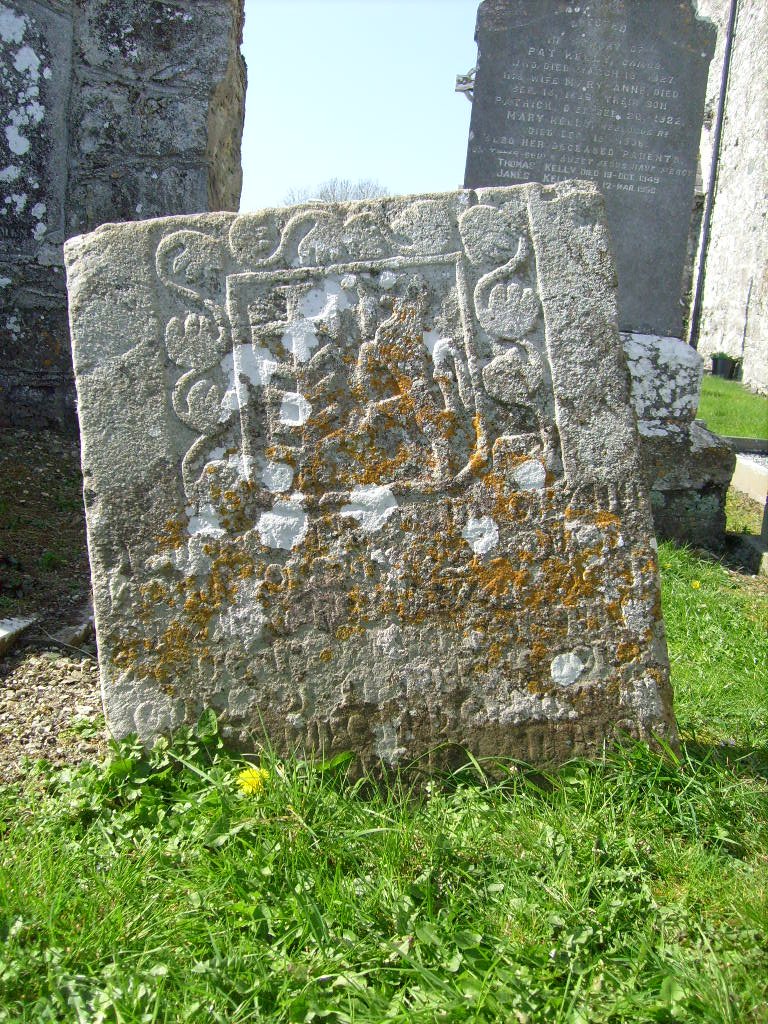 It may be that the uncommon cross utilised is an unsophisticated version of the cross regulée of the Lawrence family and while this may be a localised error based on a lack of significant heraldic knowledge, more clarity is required before part of these arms are definitively attributed to a Lawrence connection. Bryan or Bernard Lorcan, a prominent member of the Lorcan family did marry one Mary Lawrence of the Lawrence family of Ballymore and later of Lisreaghan in the mid seventeenth century and if this cross was utilised to mark an alliance with the Lawrence family it would date the assumption or initial use of these arms to a date no earlier than that marriage. His death in 1683 and burial in the Lorcan chapel at Meelick was recorded by the friars there. 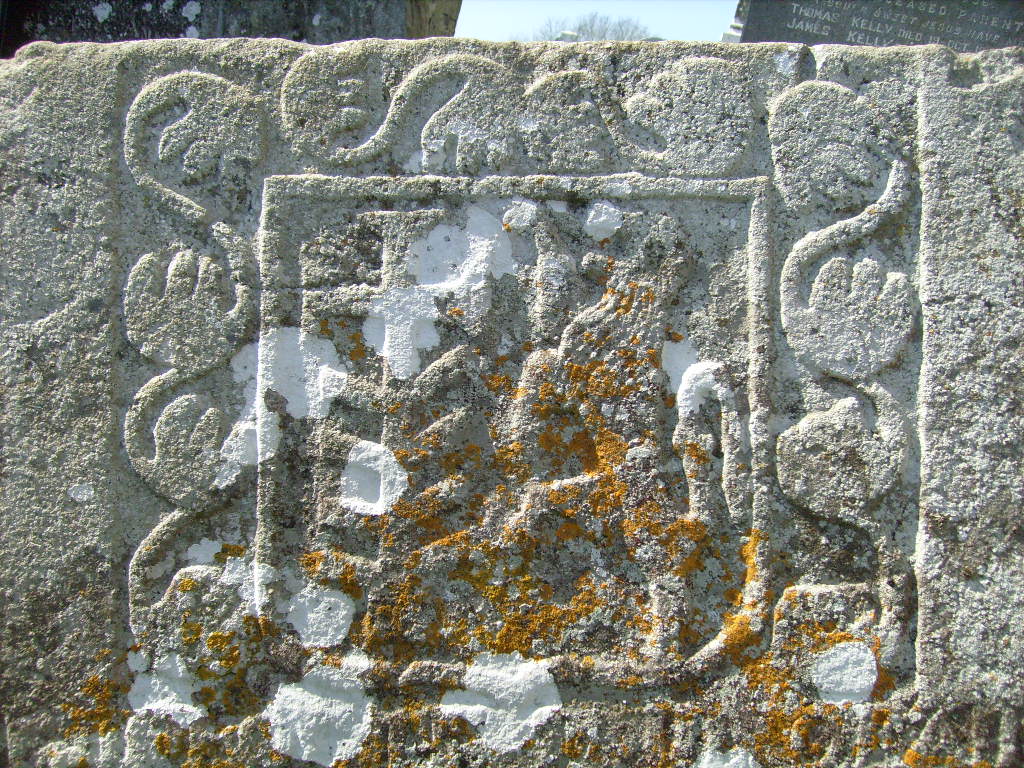 No dividing line is evident between the cross and the lion rampant and it appears, given Anthony’s marriage to a McDermott, that this is not an impaled coat of arms but that the composition as a whole was the complete paternal arms in its entirety utilised solely by this particular line of the Lorcan or Larkin family. 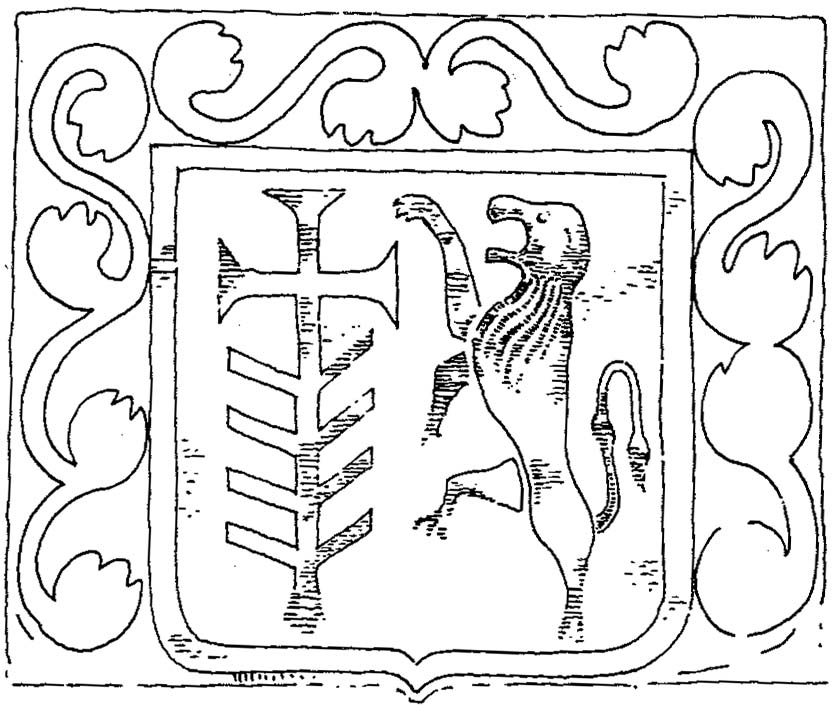 author’s impression of arms from Larkin headstone at the Lorcan chapel, Meelick.

The ancestral lands of the Lorcans in east Galway in the late medieval and early modern period lay in the parish of Kiltormer within the O Madden territory of Síl Anmchadha (later known as the barony of Longford). While it has been claimed that the arms displayed on this Lorcan gravestone are those of the sept of the O Larkins of Síl Anmchadha, the concept of sept arms or arms eligible to be borne by every male member of the same sept did not exist under the Laws of Arms in Ireland and these arms, therefore, are only those of the individual lawfully entitled to them and could only lawfully be borne by an individual who could clearly show descent from an armiger. While the immediate family or lineal descendants of this Anthony Lorcan have not been recorded, one of the few members of the Larkin family of significant local social standing resident in the barony of Longford by the late eighteenth century was Joseph Lorcan of Graveshill in the parish of Kiltormer, whose death in 1800 and burial in the grounds of the Lorcan Chapel at Meelick was recorded by the Meelick friars. The seniority of the family of Graveshill is further evidenced by its association with the Lorcan chapel in the early nineteenth century, with the Meelick friars referring to the structure at least on one occasion as ‘Lorkan’s Chapel of Graves Hill’ and on another as ‘the Chapel called after Mr. Lorcan of Graveshill.’

Joseph Lorcan of Graveshill would appear to have been descended from or of the same family as Bryan Lorcan of Dangin, who was directed to transplant from Dangin to elsewhere by the Cromwellians in the 1650s. However, the family managed to retain their interest in some of their former lands in the parish of Kiltormer. Legal disputes between Bryan Lorcan of Dangin and the Earl of Clanricarde regarding the Lorcan ‘Estate of Inheritance,’ comprising one hundred and nineteen acres in the townland of Dangin (ie. the modern townland of Gortnalug) and seventy seven acres in the adjacent townland of Skenageehy in the parish of Kiltormer were brought to a conclusion in a deed dated August 1742 to which Bryan Lorcan affixed his seal. In the following decade Peter Lorcan of Barnaboy, near Graveshill, affixed a seal to a deed dated 1754 relating to lands at Barnaboy, while four years later Joseph Lorcan and Bryan Lorcan, both of Graveshill (and later of Dunmore and Barnaboy respectively), by a deed dated March 1758, leased to Admiral Peter Lawrence of Woodfield, near Eyrecourt lands in Dangin, Skenageehy and ‘Knockanehuohy otherwise called Graveshill.’[i] In this latter case both Lorcans affixed their seal or seals to the deed. While memorials of the three deeds were recorded in the Registry of Deeds the original documents and therefore the wax seals affixed thereto do not appear to have survived and it is unknown if these were armorial seals reflecting the arms found on the Lorcan headstone at Meelick. 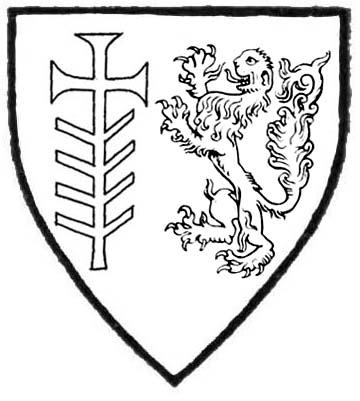 The arms of one Captain Peter Lorcan or Larcan, who died on the 20th June 1625 and was buried at St. Nicholas’ Church, Dublin, were given in the records of the Ulster King of Arms as ‘Or a cross patonce Gules and on a chief Azure three garbs Or.’ He was husband of Elizabeth Godolphin, daughter of one ‘sometime Burgomeister of Osteem’ and father of four sons, Oliver, Peter, Laurence and Henry and one daughter, Charitie. In his Funeral Entry his arms were shown impaled but with his wife’s family arms shown empty.[ii] It is not clear from which family this Captain Lorcan derived but other families of the name Lorcan or Lorkan were established about Dublin by the mid sixteenth century, with Thomas Lorkan of Swords acting as a juror in an inquisition into property and rights relating to the Franciscan friary at Drogheda, taken at Swords, in 1542.[iii] Another of the name, one Maurice Lorcan was given as holding a lease on property at ‘Baldowell’, County Dublin in 1537.[iv] In August of 1618 one Peter Lorkan otherwise Lorkaine of Dublin City, merchant, was granted a general pardon by the Crown.[v] There is no evident family connection from the available records to associate the Captain Peter Lorcan who died in 1625 with the Lorcan or Larkin family of the barony of Longford in County Galway. Arms similar to those of Captain Peter Lorcan were given in Genealogical Office Manuscript No. 62, formerly part of the records of the Ulster King of Arms. The arms were blazoned therein as ‘Or, on a cross patonce Gules a lion passant guardant Or, on a chief Azure three garbs Or’ but neither the family named ‘Lorkin’ or ‘Larkin’ to whom they related or their place of origin was identified.[vi] Although described as ‘Smith’s Ordinary of Arms A No. 2,’ Gerard Slevin, Chief Herald of Ireland, inserted a note in the manuscript in 1955, musing that the work may have been a copy of an Alphabet of Arms, dated circa 1604, written by William Smith, who served as Rouge Dragon Pursuivant in 1597. The main body of the work is believed to have possibly been a seventeenth century copy of Smith’s Alphabet and, while a number of entries were added later, the blazon relating to this Lorkin was included in the main body and in the earliest hand, suggesting a date in the early or mid seventeenth century.

Arms were also depicted in the records of the Ulster King of Arms relating to a family or armiger named Lorkin but these would appear to relate to an individual of English extraction or at least appear to be of English origin. A compilation of arms dating from the early eighteenth century gives those arms as Ermine three leopards heads Sable.[vii] This same heraldic shield was given as that of the immediate descendants of Thomas Lorkyn alias Larkyn of Frindsbury in Kent, whose son Thomas, ‘a doctor of Phissick and Reader of the Queens Ma’ties lector of the University of Cambridge’ married Catherine, daughter of John Hatcher, ‘Doctor of Phissick’ and had one son and five daughters; John, Catherin, Elianor, Marye, Allice and Elizebeth. An Anglican churchman and academic, Doctor Larkin was born about 1528. In 1564 he was created Regius Professor of Physic for life and from 1572 to 1585 served as rector of Little Waltham in Essex. He died in 1591 and was buried in Great St. Mary’s at Cambridge and above his burial place his arms were depicted, impaling those of his wife’s family. As his son John died without issue, his daughters were his co-heirs. The 1619 heraldic visitation of Cambridgeshire gave the arms of this Larkin family as ‘Ermine, three leopards faces Sable’ and for crest ‘a lark, wings endorsed Proper holding in its beak a columbine, leaved Or, flowered Azure.’

Burke, in the 1884 edition of his ‘General Armory of England, Scotland, Ireland and Wales,’ gave the arms of another individual or family of the name Larkin as ‘chequy Gules and Argent, a cross Azure.’ The arms, however, were not attributed to any particular armiger or his immediate family and their record was not attributed to Ulster’s office. It would appear likely, however, that these arms relate to a family of English origin and pre-date the second decade of the seventeenth century, as a variation upon those arms was confirmed upon an Englishmen in 1611. Thomas Larkyn of the city of Westminster, Middlesex, was the recipient of an unsigned grant and a confirmation of arms from William Camden Clarenceux King of Arms dated 28th November 1611.[viii] His arms were given therein as ‘chequy Argent and Gules, on a cross Azure five keys paleways Or’ and for crest , similar to that of Dr. Lorkyn of Cambridge University, ‘a lark Azure, beaked and legged Or, standing on a key of the last.’

For further details relating to this family, refer to ‘Larkin’ under ‘Families.’

[iii] Griffith, M.C., Calendar of Inquisitions formerly in the office of the Chief Remembrancer of the Exchequer prepared from the mss. of the Irish Record Commission, Co. Dublin, Dublin, I.M.C., 1991, p. 96.

[iv] Griffith, M.C., Calendar of Inquisitions formerly in the office of the Chief Remembrancer of the Exchequer prepared from the mss. of the Irish Record Commission, Co. Dublin, Dublin, I.M.C., 1991, p. 73.

[viii] Ryland, W.H. (ed.), Grantees of arms named in docquets and patents to the end of the seventeenth century,’ The Publications of the Harleian Society, Vol. LXVI, London, 1915, p. 150.