The arms of Sir Christopher Nugent, knight, Baron of Delvin, was given in sketch form in an armorial manuscript in the records of the office of the Ulster King of Arms dated circa 1603 as Ermine two bars Gules.[i]

The family’s close association with the eastern part of County Galway dates from the mid seventeenth century and the earliest surviving representation of their arms in that region occurs upon an early eighteenth century armorial stone embedded above the entrance gate of the gatehouse to Pallas Castle, near Tynagh in south east Galway, bearing the impaled arms of a member of the family. 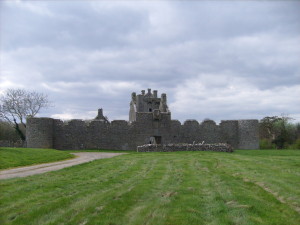 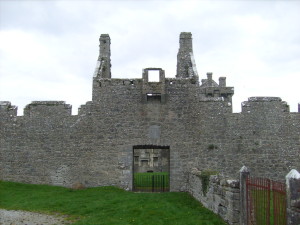 The dexter side of the shield at Pallas displays the arms of a member of this branch of the Nugent family, that is, Ermine, two bars and upon the upper bar a crescent. The sinister side, displaying the arms of the armiger’s wife’s family, give a lion rampant and in chief two primitively carved open hands, couped at the wrist. No colours or tinctures are now evident on the stone. The crest, from about which curled mantling falls on each side of the shield, is a cockatrice with wings elevated and above the cockatrice is carved in a lighter fashion a stylised coronet. Below the shield are given the date 1719 and the combined mottos, ‘De creui (recte: decrevi) Deo et fidelis Regi.’ The crescent displayed on the upper bar of the armiger identifies him as a second son or descendant of a second son of the senior member of the house. 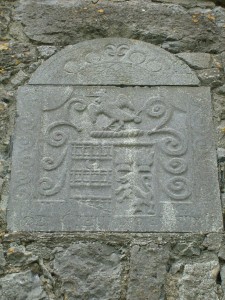 Much of the former lands of the Burkes about Pallas were declared forfeit in the middle of the seventeenth century and allocated by the Cromwellian authorities to the Earl of Westmeath, who had been ordered to remove to Connacht. On the restoration of the monarchy in the person of King Charles II, Richard Nugent, 2nd Earl of Westmeath and 10th Baron of Delvin returned to his ancestral lands and the lands about Pallas were conferred on his second son, the Honourable Thomas Nugent, who was appointed Chief Justice of the King’s Bench in Ireland. The same Thomas Nugent was created Baron Riverston by King James II in the fifth year of his reign, a title later officially disallowed by the government of King William and Queen Mary, although claimed over succeeding generations by the family and recognised by many as a courtesy title.[ii]

Thomas Nugent, 1st Lord Baron of Riverston married Marianna, daughter of Henry Barnewell, Viscount Kingsland and died in 1715. He had three sons; Hyacinth Richard, the eldest and his heir, William and Ignatius Nugent. Hyacinth Nugent claimed and used the title 2nd Lord Baron of Riverston and married Susanna, daughter of Sir Tristram Beresford, 3rd Baronet. Having spent many years in France after the Jacobite defeat and as the subject of a decree of outlawry for treason against King William and Queen Mary at the age of six years, he later sought relief to sue as the lawful heir to his fathers estates which he claimed were in the unlawful possession of his younger brother William, whom he claimed was taking advantage of his eldest brothers outlawry.[iii]

Hyacinth Richard conformed to Protestantism in January 1737 and in so doing gained possession of his family lands but died, without issue, at his house in London later that same year of 1737.[iv] He was succeeded to the family estates by his brother William as 3rd Lord Baron of Riverston, who conformed to Protestantism in 1738 or 1739.[v] This William married Bridget Daly, daughter of Charles Daly of Cloghan, Kings County and sister of Anthony Daly of Callow, County Galway Esq. and died in 1756.[vi]

The armorial stone placed over the gate to the tower house at Pallas displays the impaled arms of this William, 3rd Lord Baron of Riverston, although the date thereon of 1719 implies that it was sculpted during the lifetime of the 2nd Lord Riverston and appears to commemorate the marriage in March of that year of William to Bridget Daly.[vii] The crescent indicating the second son would appear to refer to William as the second son of the 1st Lord Baron of Riverston as opposed to reflecting the house of Pallas being descended from the second son of the Earl of Westmeath, as the Nugents of Crannagh, a junior house descended from those of Pallas, did not bear a crescent. The arms on the sinister side of the shield is that of Daly. While the tinctures of the Callow family is unclear, they in all likelihood reflected the arms of another Daly, John Archer Daly of Raford and Furbough, Co. Galway, who assumed the name and arms of Daly. He married in 1864 Lady Anne Nugent, daughter of the 9th Earl of Westmeath, and his arms were is given as ‘per fesse Argent and Or, a lion rampant per fesse Sable and Gules, in chief two dexter hands couped at the wrists of the last’ impaling those of his wife ‘Ermine, two bars Gules.’ This John Archer Daly also bore the commonly held motto used by many armigerous Dalys ‘Deo fidelis et Regi.’[viii]

Anthony, 4th Lord Baron of Riverston was succeeded at Pallas by his eldest son William Thomas, to whom, in his last will and testament, he also directed, ‘the family plate with my crest on it’ be bequeathed.[ix]

Arthur Anthony Nugent of Crannagh, parish of Tynagh, in County Galway, second son of the 4th Lord Riverston, married in 1808 Maria, only surviving daughter of Richard Gore of Clotanny, Kings County and died in August 1844. He had three sons and four daughters and was succeeded at Crannagh by his eldest son Arthur Nugent of Crannagh, Esq. The arms of this Arthur Nugent, son of Arthur Anthony, were given in the nineteenth century as Ermine, two bars Gules, with a crest of a cockatrice rising Proper, tail nowed, comb and wattles Gules and motto ‘decrevi.’[x] The family were buried in a small detached building within the grounds of Kilnalahan abbey, on one of the interior walls of which was erected an armorial commemorative stone dated 1831 bearing the arms of the family. Without tincture, the arms displayed show simply Ermine with two bars and above the shield and wreath a cockatrice, with motto below of ‘decrevi’. 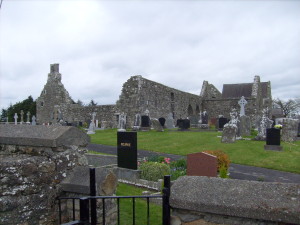 Kilnalahan Abbey, in the village of Abbey in south east County Galway. 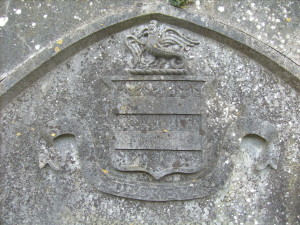 The arms of Nugent of Crannagh, placed above their tomb at Kilnalahan. 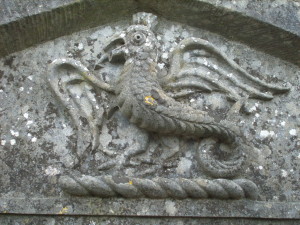 The cockatrice crest of the Nugents. 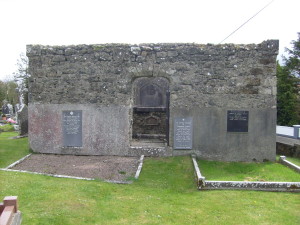 The burial place of the Nugents of Crannagh on the grounds of Kilnalahan Abbey.

William St. George Nugent, born in 1832, son of the 9th Earl, married Emily, daughter of Andrew Blake J.P. of Furbough, Co. Galway and Maria Julia Daly in 1866 and succeeded his father as 10th Earl of Westmeath.

The arms of the sons of William St. George Nugent, 10th Earl of Westmeath are given by A.C. Fox-Davies as Ermine, two bars Gules, with mantling of Gules and Argent. The crest, on a wreath of the colours, being a cockatrice wings elevated Vert, tail nowed, comb and wattles Gules and for motto ‘Decrevi’.[xi]

The 10th Earl died in May 1883 and was succeeded by his eldest son, Rt. Hon. Anthony Francis, born in 1870, as 11th Earl of Westmeath. Seated at Pallas, Loughrea, as 11th Earl of Westmeath and Baron Delvin, he had for supporters ‘on either side a cockatrice as in the crest.’[xii] The arms of one of the Earls of Westmeath are displayed on the external stone wall of a side chapel among the ruins of Kilcorban friary church. While it is unclear to which earl the arms belong, it may have been Anthony Francis 11th Earl of Westmeath, who in 1920 had an inscribed stone tablet erected within the side chapel to commemorate his having restored the side chapel ‘in pious memory of the members of the many generations of the family of Nugent who rest within its walls.’[xiii] The arms are finely carved with cockatrice supporters on either side, though without combs and above the shield is displayed only a coronet, without a crest and were placed in the position on the external wall of the side chapel following later restoration work in the 1980s.[xiv] 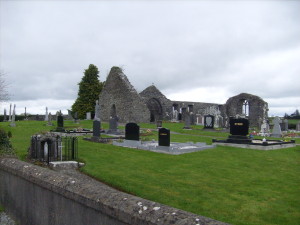 The ruins of Kilcorban friary in south east County Galway. 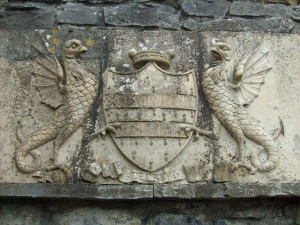 For further details on this family, refer to ‘Nugent’ under ‘Families.’

[iv] The historical register, containing an impartial relation of all transactions, foreign and domestick, London, J. Merres, 1738, Vol. 23, p. 11. ‘At his house in Gerrard Street, St. James, the Right Hon. Hyacinth Nugent, Lord Viscount Riverstown of the Kingdom of Ireland, lately come from that kingdom.’

[vi] Case on behalf of William Thomas Nugent of Pallas, in the County of Galway, Esquire, claiming to be Baron Nugent of Riverston in the Peerage of Ireland, Parliament House of Lords, 1839, Pedigree table, p. 25. William Daly of Cloghan is elsewhere in the same legal case identified as Charles Daly of Callow, Esquire.

[vii] The date of marriage of William Nugent is given in ‘J. B. Burke, Royal descents and pedigrees of founders kin, London, Harrison, 1858, pedigree, pp. x-xi.’

[xiii] Inscribed on the limestone tablet is the text; ‘This ancient chapel of Kilcorban was restored in the year 1920 by Anthony Francis 11th Earl of Westmeath and Baron Delvin to the glory of God and in pious memory of the many generations of the family of Nugent who rest within its walls.’

[xiv] The armorial stone does not appear in its current location on late twentieth century photographs prior to the works undertaken in the 1980s. It has been stated in a booklet of 1987 entitled ‘Kilcorban priory’, that the armorial stone was replaced in its original position during these works. It is also stated, however, that the coadestone plaque dates from the early nineteenth century. This is unlikely given that the arms, with supporters and coronet, are that of a peer and the Nugents of Pallas did not acquire the title of Westmeath until the late nineteenth century.