The castle of Ballagh stood in the modern townland of Ballagh West, parish of Clontuskert in the east of County Galway, within that part of Clontuskert that lay within the O Kelly-dominated half barony of Clonmacnowen, on the northern perimeter of the ancestral territory of the O Maddens.

It is unclear when this castle was initially constructed but one of the earliest references to the castle was in the early decades of the seventeenth century. About 1619 John Kelly of Bealagh in the half barony of Clonmacnowen held the castle of Bealagh, with one cartron of Killevin otherwise Bealagh, a half cartron of Lissnadrissa and a half cartron of Lisnafernoge, all in the same half barony.[i] The Kellys appear to have resided at Ballagh into the mid seventeenth century with Mabella, daughter of John Lawrence marrying J. Kelly of Ballagh in the 1650s.[ii]

In 1682 Peter Pilley (or Pelly), described as ‘of Ballagh, Co. Galway’, leased lands to a County Clare landowner.[iii] The location of Pilley’s residence appears to have been this same Ballagh in the parish of Clontuskert. In the patent of lands confirmed unto Peter Pilley in 1677 under the Acts of Settlement and Explanation Ballagh castle is given as ‘the castle of Ballaghticloy.’ (NLI, Dublin, PP 941, Public Records Ireland, Reports, Fifteenth Annual Report, 1825, pp.242-3.) Among the lands confirmed to Pilley by the Crown in that same year were lands in Killermine, Clonprask and Gortmore and Trestane, ie. modern townland of Tristaun. This Killermine would appear to be the same cartron of ‘Killevin otherwise Bealagh’ held earlier by Kelly.[iv]

Ballagh Castle appears on the six inch Ordnance Survey maps about 1842 in a ruinous state near a narrow minor roadway. From the footprint of the castle proper it would appear to be similar in size to that of a tower house on a southwest northeast axis. The same map shows the presence or traces of what would appear to be a sub-rectangular bawn wall with the dwelling itself forming the southeast corner of the bawn enclosure. From the layout of the bawn about the tower it would appear likely that the entrance door was positioned on the narrow southwest elevation of the tower or, if in the event of the door being positioned on the longer side-wall, it would have occurred on the north-western elevation, both of which were the only elevations facing into the bawn enclosure. 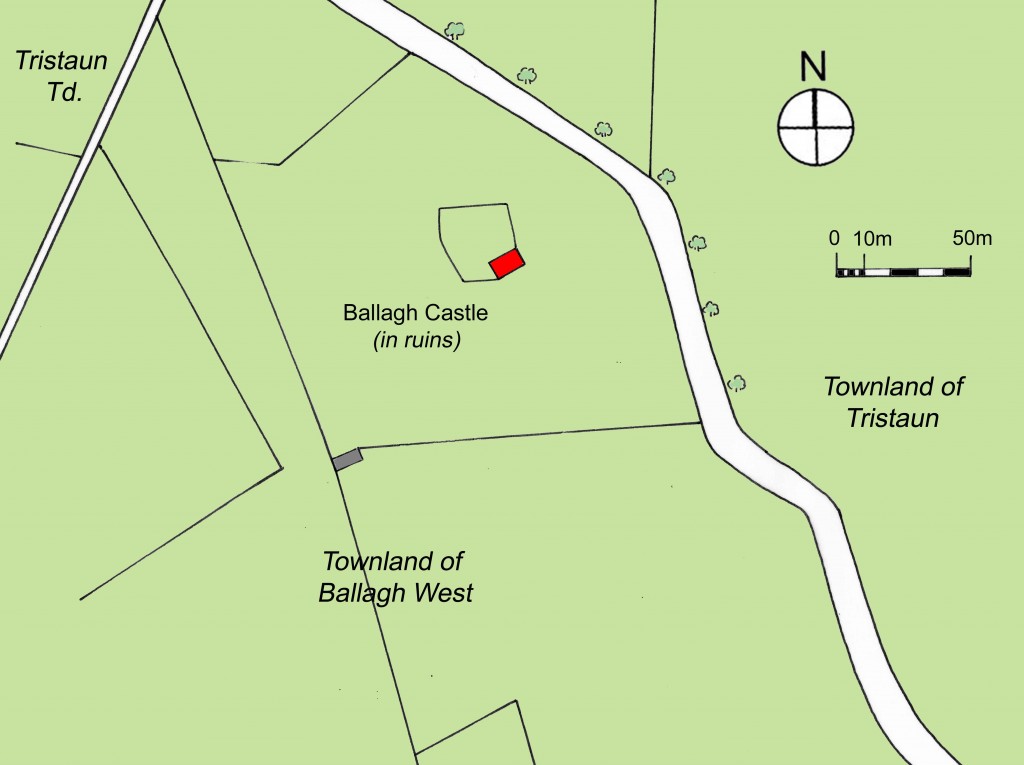 The remains of Ballagh Castle (in red) in the parish of Clontuskert in the mid nineteenth century, indicating the line of a bawn wall.

The bawn wall appears to have disappeared almost completely by the late nineteenth century and the ruins of the tower significantly reduced in extent, with the twenty-five inch Ordnance Survey maps showing only what appears to be the remnant of the north eastern wall of the main building standing. The former bawn enclosure by this time was shown as an irregularly shaped raised mound to the north west of the remains of the tower. To the southeast of the tower wall and mound a long narrow trench had been dug in the field leading to the tower wall. 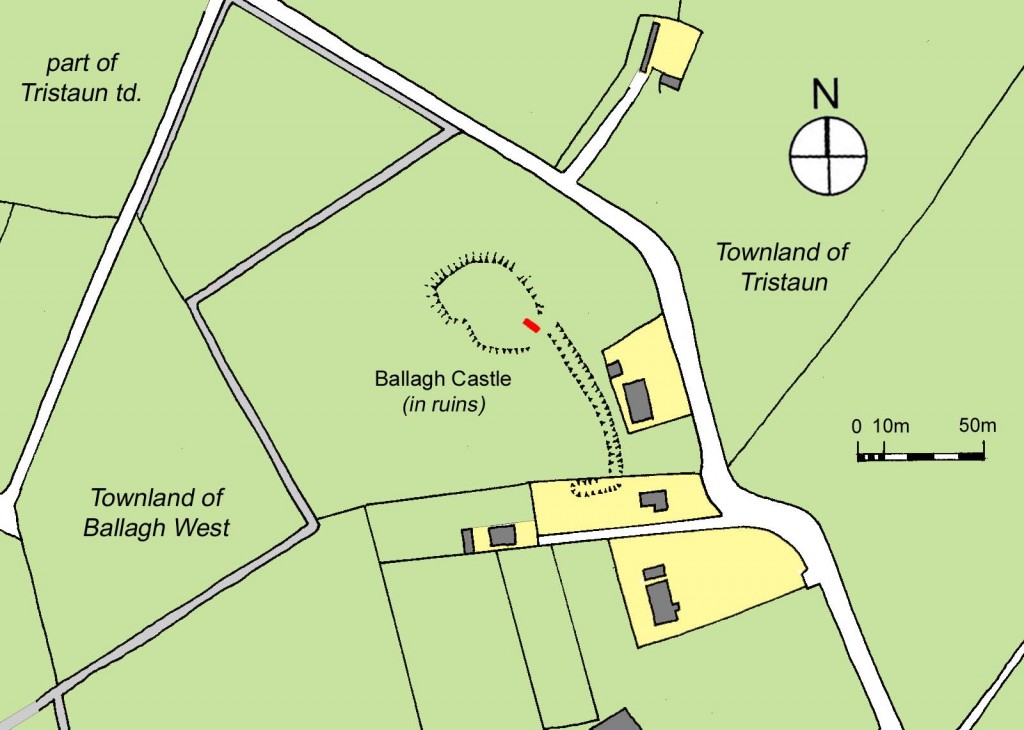 The remains of Ballagh castle (in red) as indicated on Ordnance Survey maps dating from the end of the nineteenth century, shown in relation to adjacent houses, structures and sites in the early twenty-first century (in yellow and grey).

In the twentieth century a number of houses and a farmyard were constructed along the roadside to the southeast of the site. All that remained of the tower and bawn in the early twenty-first century was a fragment of the north eastern building wall on an almost oval-shaped raised mound at a considerable height above the adjacent road. The field trench was still in existence to its southeast at the rear of the modern farm buildings. Aerial photography of the site appears to indicate traces of a possible further enclosure of a similar size adjoining, and to the west of, the former bawn with a smaller projecting feature to the southwest of that additional enclosure.

[ii] Clontuskert Heritage Group, The Parish of Clontuskert, Glimpses into its past, ed. by J. Molloy, Ballinasloe, 2009, p. 482.

[iii] Ainsworth, J. (ed.), The Inchiquin Manuscripts, Dublin, Stationary Office for the Irish Manuscripts Commission, 1961, p. 406. ‘No. 1194. 17 May 34 Chas. II, 1682. Lease for a year by Peter Pilley of Ballagh, Co. Galway, gent. to John McDonnogh of Ballikeile, Co. Clare, gent. of forty Irish acres profitable ‘Irish Plantation measure and of Staffords Survey’ in Caherserkin. The deed was witnessed by Cornelius Horan, Garret Wale, Walter Wale, another Walter Wale, John Haverty and William Wale and endorsed with affidavit of John Haverty to sealing and delivery of deed by Peter Pilley. Sworn before William Worth, 1 Oct. 1684.’ One of these Walter Walls appears to have been Walter Wall of Carra, Co. Galway, who leased lands in the three half quarters of Castle and the quarter of Carrugeare to the same John McDonough of Ballykeile, Co. Clare about 1684. (p.402.) Cornelius Horan is in all likelihood Captain Cornelius Horan of Abbeygormican who died in 1726.

[iv] Lisnafernoge, wherein John Kelly of Bealagh held land, appears to be the modern townland of Lisheennavannoge in the parish of Clontuskert, its name pronounced locally as ‘Lisheenavarnog’. (Clontuskert Heritage Group, ‘The Parish of Clontuskert, Glimpses into its past’, ed. by J. Molloy, Ballinasloe, 2009, p. 491.)