A seventeenth armorial stone tablet set in the west wall of the sacristy of the Franciscan friary at Kilconnell in East Galway commemorates Mathias Barnewall, who is described thereon as the 12th Baron of Trimlestowne, transplanted from County Meath into Connacht by the Cromwellian authorities and who died at Monivea in 1667 and also other members of his family. The nineteenth century antiquary John O Donovan, who visited the site in October of 1838, recorded the inscription in the Ordnance Survey Letters as;

‘HERE LYETH THE BODY OF MATHYAS BARNEWALL THE 12TH LORD BARON OF TRIMBLESTOWNE WHO BEING TRANSPLANTED INTO CONNAGHT WITH OTHERS, BY ORDERS OF THE USURPER CROMWELL, DYED AT MOINIVAE, THE 17TH OF SEPTEMBER 1667 FOR WHOME THIS MONUMENT WAS MADE BY HIS SONNE ROBERT BARNEWALL THE 13TH LORD OF TRIMBLESTOWNE. HERE LYETH ALSO HIS UNCKLE RICHARD BARNEWALL, JAMES BARNEWALL WHO DYED (ATT) CREGGAN THE 2ND OCTOBER 1672, AND JAMES BARNEWALL OF AUGHRIM. GOD HAE MERCY ON THEIRE SOULES.’ 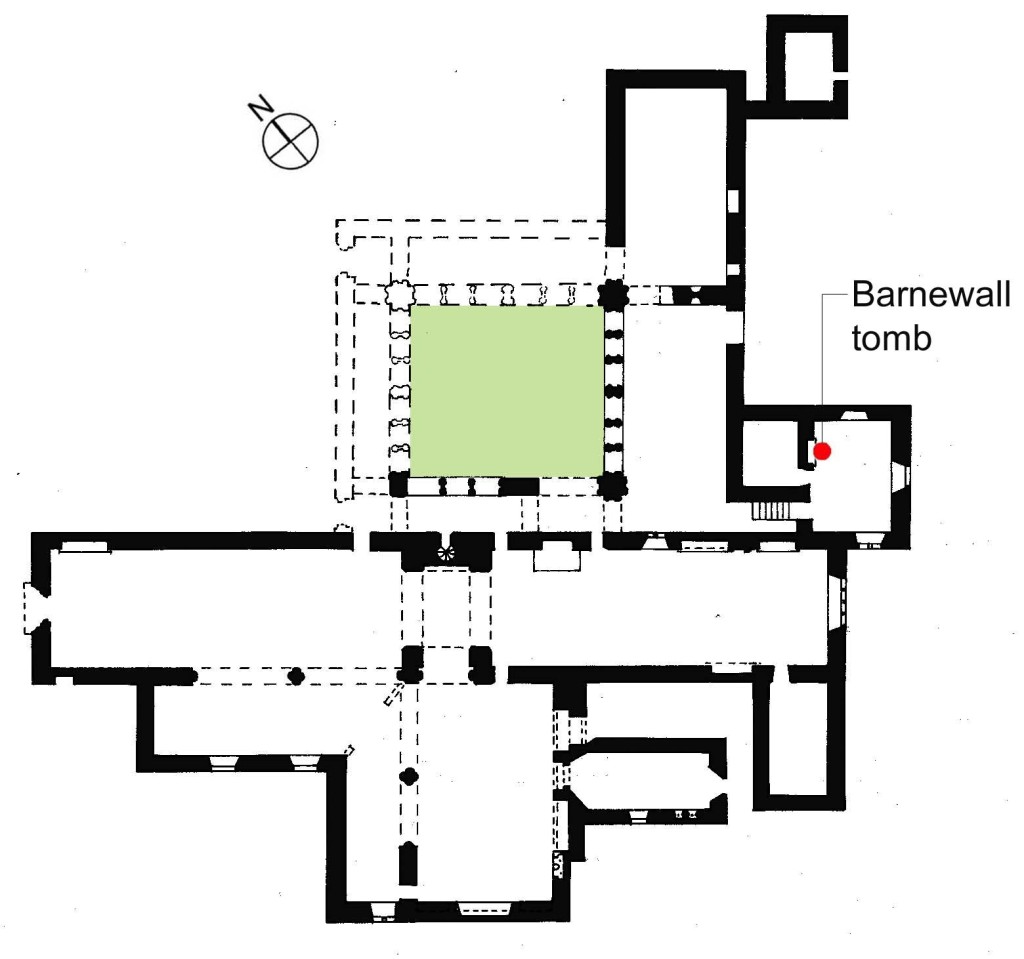 Plan of the ruins of Kilconnell friary (after F.J. Bigger) showing location of Barnewall tomb.

The arms carved on this stone are those of a peer, the shield surmounted by a coronet and supported by a pair of lions rampant. The shield is an impaled shield with that of Barnewall given on the dexter side and on the sinister that of his wife’s family. The dexter side appears to be a depiction of a simple ermine field, although a very particular stylised version representing that fur. The sinister side appears to be a simple latin cross. Centred immediately above the shield is a coronet of seven globes, the title of Baron of Trimlestown created in 1461. Surmounting the coronet is a wreath and a foreshortened version of part of the Barnewall crest of five ostrich feathers. Upon the feathers a bird taken to be the Barnewall falcon rises, wings outstretched and looking towards the dexter side. Beneath the shield and lions rampant supporters is shown the motto on a scroll ‘Malo mori quam faedari’. 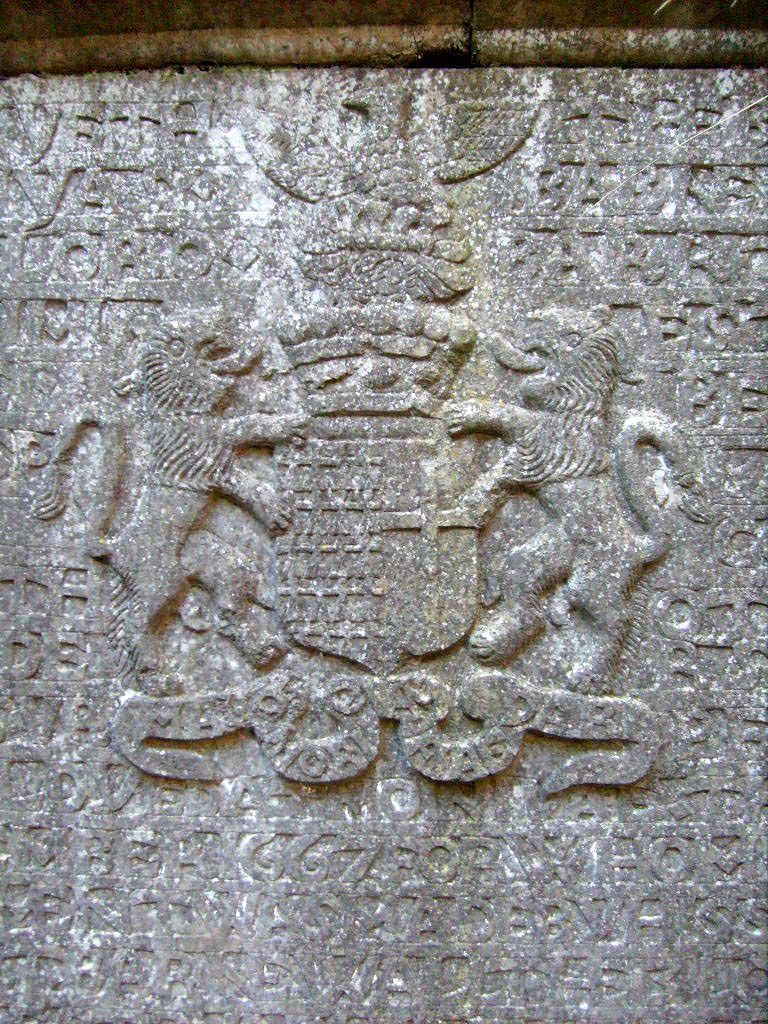 The arms of the family depicted on the sinister side may be intended as those of Netterville. Mathias Barnewall, given variously as the 12th Baron and also the 8th Baron, was married to Jane, daughter of Nicholas 1st Viscount Netterville.[i] The Viscount Netterville arms were later given in the nineteenth century as Argent, a cross Gules fretty Or. There is no evidence of a fretty design on the cross on the sinister arms unless that it was at one time indicated in paint on the cross. No tinctures are evident or indicated, rendering identification with the Netterville arms unclear. The stone was erected by Robert, described on the tablet as the 13th Baron of Trimlestowne and son of Mathias. Robert was married to Margaret, daughter of Sir John Dongan, baronet and it does not appear that the arms depicted are shown as his, the sinister arms not coinciding with those of Dongan.[ii]

The arms of Sir Peter Barnewall, Baron of Trimlestown were depicted in an armorial compilation retained in the office of the Ulster King of Arms dating from about 1603.[iii] The arms were shown as Ermine a bordure engrailed Gules, without crest or motto. This would appear to be Peter, 6th Lord Trimlestown, buried in 1598 in County Meath.[iv] 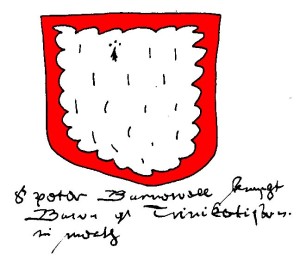 Sketch of arms of Sir Peter Barnewall, Baron of Trimlestown, after the tricked sketch depicted in Harl. Ms. 5885, dated circa 1603. 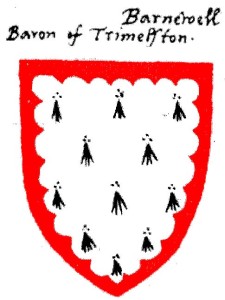 The senior line of the family later regaining their seat in County Meath, the arms of John Thomas Barnewall who succeeded his father as Baron of Trimlestown in 1813 were given as Ermine a bordure engrailed Gules and for crest a plume of five ostrich feathers Or, Gules, Azure, Vert and Argent, a falcon rising of the last. For supporters this Baron of Trimlestown bore dexter; a griffin Argent beaked and winged Or and on the sinister side a lion Gules armed and langued Azure, both collared Or. For motto; ‘Malo mori quam foedari.’[v]

No bordure of any type is given on the Barnewall arms on the Kilconnell memorial, nor are the lion rampant supporters, which exhibit fulsome manes, collared.

[i] Burke, J., A general and heraldic dictionary of the peerage and baronetage of the British Empire, Vol. II, 4th Edition, London, 1832.

[ii] Burke, J., A general and heraldic dictionary of the peerage and baronetage of the British Empire, Vol. II, 4th Edition, London, 1832.

[v] Burke, J., A general and heraldic dictionary of the peerage and baronetage of the British Empire, Vol. II, 4th Edition, London, 1832.