Sir James Laurence of Asheton in England carried as his arms in the medieval period a shield of ‘Argent a cross regulée Gules.[i] The Lawrence family that settled about Ballymore in O Maddens country in the late sixteenth century claimed descent as a junior branch from this family of Ashton Hall in Lancashire.[ii] The family of Ballymore likewise bore for their arms Argent a cross regulée Gules.

During the Cromwellian period in the mid seventeenth century the Lawrences were dispossessed of part of their lands, including the castle of Ballymore and settled nearby at Lisreaghan where the senior representative of the family in the eighteenth century erected a mansion known as Lisreaghan or Bellevue.

The arms of a later Lawrence, the Rev. Charles, of Lisreaghan, Co. Galwav, formerly Vicar of Thurton, Anglican Diocese of Norwich, born 28 Oct. 1828, married 26 February 1866, Cecily, youngest daughter of General Sir Charles Wale, K.C.B., of Shelford, Cambridgeshire are given by Sir Bernard Burke as ‘Quarterly: first and fourth, Argent a cross regulée Gules for Lawrence ; second and third, Sable a catherine-wheel between two crescents in chief and a trefoil in base Or for Scott.’ For crest, a demi-turbot tail erect Proper and for motto  ‘In cruce salus’.[iii] Sir Bernard Burke gives the same quartered arms and crest in 1871 for Walter Lawrence of Lisreaghan, father of the Rev. Charles Lawrence, but gives the motto on that occasion as ‘Pro rege, et pro patria, semper.’[iv] 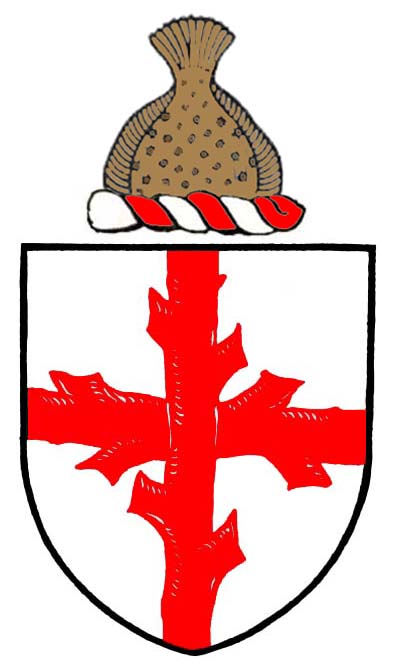 This Rev. Charles was great-grandson of the union of John Lawrence of Lisreaghan and Mary, daughter of John Scott of Greenish and Cappavarnagh, Co. Galway, and of Mont Serat, West Indies. The wealth inherited by their son through Mary Scott’s inheritance as an heiress had a significant impact on the Lawrence fortunes and was reputed to have provided the means whereby their son Colonel Walter Lawrence built the family mansion at Lisreaghan known as Belleview.

Sir William Betham, ‘Knight attendant on the most illustrious Order of Saint Patrick, Ulster King of Arms, and principal Herald of all Ireland’ certified in January 1843 that the same arms as described by Sir Bernard Burke, quartered with Scott, ‘do of right appertain and belong to Walter Lawrence of Lisreaghan, in the barony of Longford, and County of Galway, esquire, and his descendants forever, according to the laws of arms’ but gave the motto as ‘Pro Rege seape pro Patria semper’. The text of this certification was later transcribed into the ‘Lawrence Family Album’, together with an illustration of the same arms. 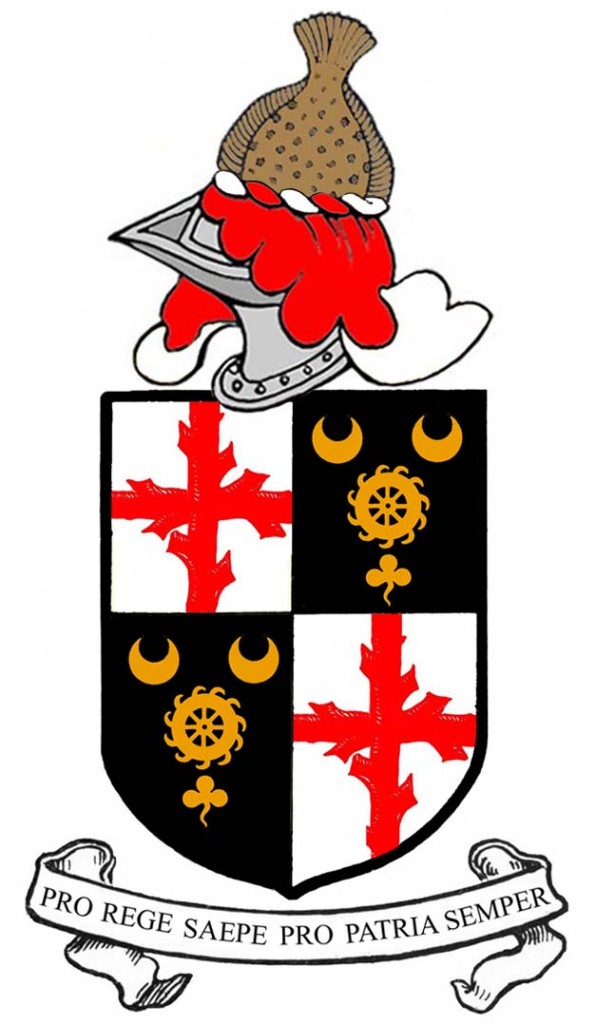 ‘Pro Rege seape pro Patria semper’ was also the motto commonly used by the nearby Eyre family of Eyrecourt. Colonel Walter Lawrence, active in the Irish Volunteers in the late eighteenth century and the political campaign to have an Irish Parliament in Ireland free of English control, had that motto inscribed on a monumental arched entrance gate he had constructed over the western entrance to his Lisreaghan demesne to commemorate the Volunteers and the new Irish Parliament of 1782.

Denis John Lawrence succeeded his elder brother, Rev. Charles Lawrence, at Lisreaghan on the latter’s death in July of 1905.[v] The arms of Lawrence were described in the 1912 edition of Burkes Landed Gentry of Ireland as it was in 1871, quartered only with Scott. The accompanying illustration of the arms of Denis John Lawrence, however, show the crest and motto ‘In cruce salus’ as it was then and gives the Lawrence Argent a cross regulée Gules in the first and fourth quarters and that of Scott in the second. In this instance the third quarter appears to given as Argent two bars Gules, three mullets in chief of the second.[vi]

For further details relating to this family, refer to ‘Lawrence’ under ‘Families.’

[ii] Burke, B., A genealogical and heraldic history of the landed gentry of Great Britain & Ireland (Volume 2)

[iii] Burke, B., A genealogical and heraldic history of the landed gentry of Great Britain & Ireland (Volume 2).

[v] Burke, B., The genealogical and heraldic history of the Landed Gentry of Ireland (rev. by A.C. Fox-Davies), London, 1912

[vi] Burke, B., The genealogical and heraldic history of the Landed Gentry of Ireland (rev. by A.C. Fox-Davies), London, 1912