A branch of the Hamiltons of Eliston, County Tyrone came to be seated at Fahy, in what was up until the early seventeenth century the heart of the ancestral lands of the O Horans and O Maddens in the east of County Galway.

The ancestors of this branch of the Hamiltons played a significant part in the history of Scotland, with James Hamilton, the senior member of the family and first cousin of King James IV of Scotland holding the titles of 1st Earl of Arran and 2nd Lord Hamilton about the beginning of the sixteenth century. His son James 2nd Earl of Arran and Duke of Chatelherault served as Regent of Scotland for Mary Queen of Scots and was regarded as next in line to the Scottish throne after the Queen.

Following the confiscation of the Ulster estates of the O Neill Earl of Tyrone and O Donnell Earl of Tyrconnell at the beginning of the seventeenth century, their lands were allotted to Scottish grantees as part of the Plantation of Ulster. The largest grantee of lands in the barony of Strabane in County Tyrone was James, Earl of Abercorn, the eldest surviving son of Claude Lord of Peisley while his younger brother Sir Claude of Shawfield in Linlithgow was allocated extensive lands in the east of that barony.[i] From James descended the Earls, Marquises and Dukes of Abercorn while from Sir Claude descended the lines of Manor Eliston in County Tyrone and Fahy, County Galway.

The Hamiltons appear to have settled in east Galway through intermarriage with the Darcy family.

The Darcy association with the parish of Fahy in east Galway dated from the mid seventeenth century, when James Darcy of Kiltullagh in the barony of Athenry, County Galway was ordered to transplant by the Cromwellian authorities and allocated lands in the parishes of Fahy and Kilquain. He would appear to have been that James Darcy who was confirmed as proprietor of 662 profitable Irish acres in the parish of Tirnascragh (adjacent to Fahy and Kilquain) in the 1670s under the Act of Settlement following the restoration of the monarchy, 265 of which formed the two quarters whereupon Longford Castle, the former chiefry castle of the O Maddens, stood.[ii]

The Hamilton association with Fahy dates from about the marriage in 1659 of Captain Edward Hamilton to Clara, sister of James Darcy of Kiltullagh and daughter of Patrick Darcy of Dublin, seventh son of James Riveagh Dorsey, Mayor of Galway in 1602-3.[iii] For several generations thereafter the Hamilton family were seated at Fahy, at ‘Gortrea or Fairfield’ in the parish of Kilmalinoge and later at Heathlawn in the nearby parish of Killimorbologue, all within what had been the wider ancestral territory of the O Maddens in the late medieval period. 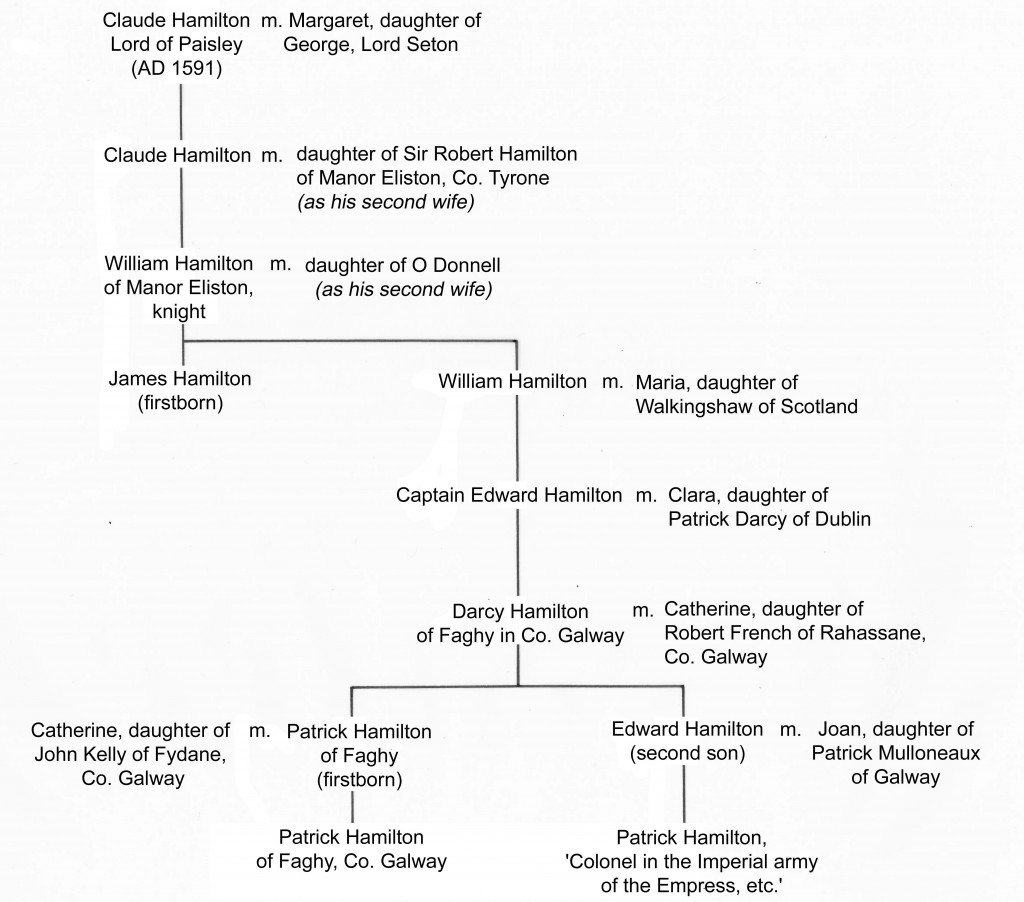 Edward Hamilton and Clara Darcy had at least one son, Darcy Hamilton of Fahy, who married Catherine, daughter of Robert French Esq. of Rahasane, Co. Galway.[vii]

This branch of the Hamilton family were Roman Catholic in the early decades of the eighteenth century and maintained a close connection with the Franciscan friars at Meelick, in particular during their persecution by the Protestant authorities in the early eighteenth century. ‘Counsellor Darcy Hamilton of ffahey’ was listed first among the members of the Roman Catholic gentry who were entrusted valuables by the friars of the Franciscan convent at Meelick (near Fahy) in 1698, when the religious under the ‘Banishment of Religious Act’ were ordered to leave Ireland by May of that year.[viii]

In 1732 Stratford Eyre of Eyreville reported that ‘the fryers of Meelick hold their house from Darcy Hamilton a popish lawyer, it is in lease to Coll: Eyre from ye family of ClanRickard for 999 years, and old Coll: Eyre sett it to this Hamilton for a term of years not yet expired: and there is a very large spacious house, well slated, with brick partitions quite thro ye House and vaults, lately built and not yet finished att this Abby, for ye use of ye Convent.’ Various members of the family were buried in the Hamilton family tomb at the Meelick friary.[ix] 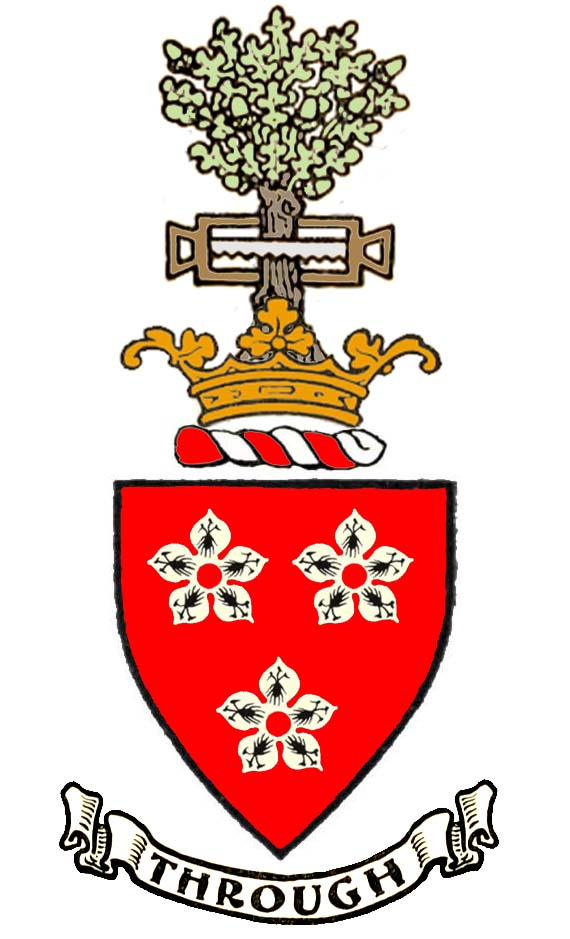 The arms of Hamilton of Fahy after those illustrated in the select pedigree of the family of Manor Eliston and Fahy, dated 1768, given in N.L.I. Dublin, G.O., Ms. 165.

The arms of Hamilton of Fahy, County Galway, were given by Sir Bernard Burke as ‘Gules, three cinquefoils pierced Ermine’, with a crest of ‘out of a ducal coronet Or, an oak tree transfixed by a frame-saw all Proper’ and for motto ‘Through.’[x] These arms were illustrated as such on a 1768 pedigree of the family of Manor Eliston and Fahy recorded in the office of the Ulster King of Arms. The purpose of the pedigree, covering a period from 1591 to 1767, was to illustrate the relationship of Patrick Hamilton, ‘Colonel in the service of Her Imperial Majesty Maria Teresa’ to the family of Fahy.[xi]

This pedigree gave Colonel Patrick Hamilton as son of Edward Hamilton by his wife Joan, daughter of Patrick Molyneaux of Galway, second son of Darcy Hamilton of Fahy, son of Captain Edward Hamilton and Clara Darcy. Based on this relationship, William Bryan, then Deputy Ulster King of Arms, allowed the same arms of the family of Fahy to Colonel Hamilton.[xii] These arms, however, were depicted as undifferenced from the line seated at Fahy.

The senior line of Fahy, descended from Captain Edward Hamilton’s son Darcy was seated at Fahy into the eighteenth century.

[ii] MacGiolla Choille, B. (ed.), Books of Survey and Distribution, Vol. III, County of Galway, Dublin, Stationary Office for the I.M.C., 1962, pp. 182-3. ‘The 2 quarters of ‘Ferryfeingall alias Longford and Farringean and Farrintire.’

[iii] Blake, M.J., Tabular Pedigrees of the D’Arcy family, J.G.A.H.S., Vol. X, Nos. I & II. Patrick Darcy was described as ‘of Dublin, armiger’ in the Hamilton family pedigree, N.L.I., Dublin, G.O. Ms. 165, p.60. Lodge’s ‘Peerage of Ireland’ of 1789 gave James Darcy as the only son of Patrick of Kiltullagh, son of James Riveagh Darcy and gave Captain Hyacinth Darcy of Kiltullagh as the only son of James Darcy. This Captain Hyacinth Darcy died at ‘Teranasker’ (Tiranascragh) in County Galway in 1743. (Lodge, J. (revised by M. Archdall), The Peerage of Ireland or a genealogical history of the present nobility of that kingdom, Vol. I, Dublin, James Moore, 1789, p. 123.)

[v] Manor Eliston was not created a manor until 1629 when those lands were granted to Sir William Hamilton.