The arms of the town of Ballinasloe in the east of County Galway, dating from the mid twentieth century, consist of a shield ‘Per fess wavy Azure and Argent, a fess wavy counter-charged, in chief between two swords erect Proper, pommels and hilts Or, a tower triple-towered of the second, descending from the battlements as many chains of the fourth, and in base a horse forcene Sable.’[i] 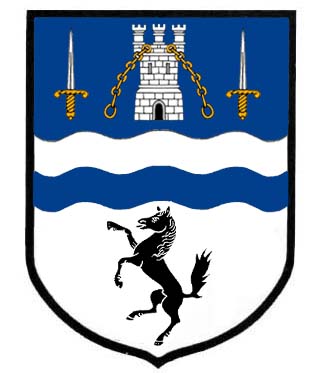 These arms, without motto or crest, were granted to the town of Ballinasloe to mark celebrations centred about the launch of the Tóstal Festival in the early 1950s.[ii] One of the activities undertaken during this national cultural festival in 1953 was the affixing of large shields displaying the arms of many large towns and cities of Ireland to lamp standards about the city of Dublin. As these shields were produced by the Genealogical Office, part of this process involved a number of those towns having to register their arms for the first time while others were granted new arms.

A comprehensive explanation of the symbolism of the various elements comprising the town’s arms was given by V. Rev. P. K. Egan in his book on the history of the town, entitled ‘The Parish of Ballinasloe, Its history from the earliest times to the present century’. In the granting of arms to the town of Ballinasloe in February of 1953, following an application by what was then the Urban District Council of the town, the Chief Herald of Ireland Edward MacLysaght acknowledged the historical association of the O Kelly family with the territory in which the town developed by the inclusion within the shield of a tower triple-towered Argent with two chains descending from the battlements Or as an element. The basic fess wavy Azure and Argent refers to the river Suck about which the town grew, while the horse was included to represent the Great October Horse Fair of the town and as such the economic aspects of the town. The swords reflect the religious aspect of the town, taking its reference from the sword of St. Michael, patron of the nineteenth century Roman Catholic church in the centre of the town.[iii]

The original Letters Patent, with text in English and in the Irish language (and bearing the signature of the heraldic artist Myra Maguire below the exemplification) was later displayed within a picture frame hung in the circulation space on the first floor of the town’s Civic Offices, built in the late twentieth century to the rear of St. Michael’s church.

[i] Egan, Rev. P.K., The Parish of Ballinasloe, Its history from the earliest times to the present century, Dublin 1960.

[ii] Hood, S., Royal Roots, Republican Inheritance, The survival of the Office of Arms, The Woodfield Press in association with the National Library of Ireland, Dublin 2002, p. 217.