The churchyard about the late medieval church at Kilmalinoge continues in use into the twenty-first century as a Roman Catholic burial ground serving the local population. No sepulchral monuments or tombs exist within the church graveyard. However, near the south-east corner of the graveyard lies the unassuming burial plot of the Gurtray line of the Counts and Countesses O Kelly de Gallagh and Tycooly, it’s four corners at one time marked by four small yew trees, all but one of which were at one time cut down. 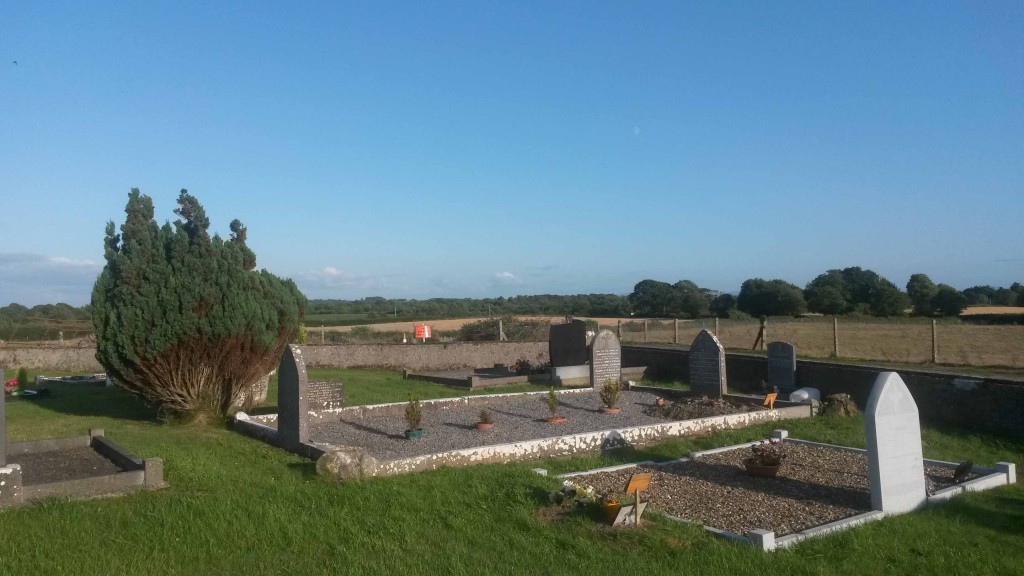 The burial plot of the O Kellys of Gurtray, junior line of the Gallagh and Tycooly branch, marked by one of what was formerly four yew trees. 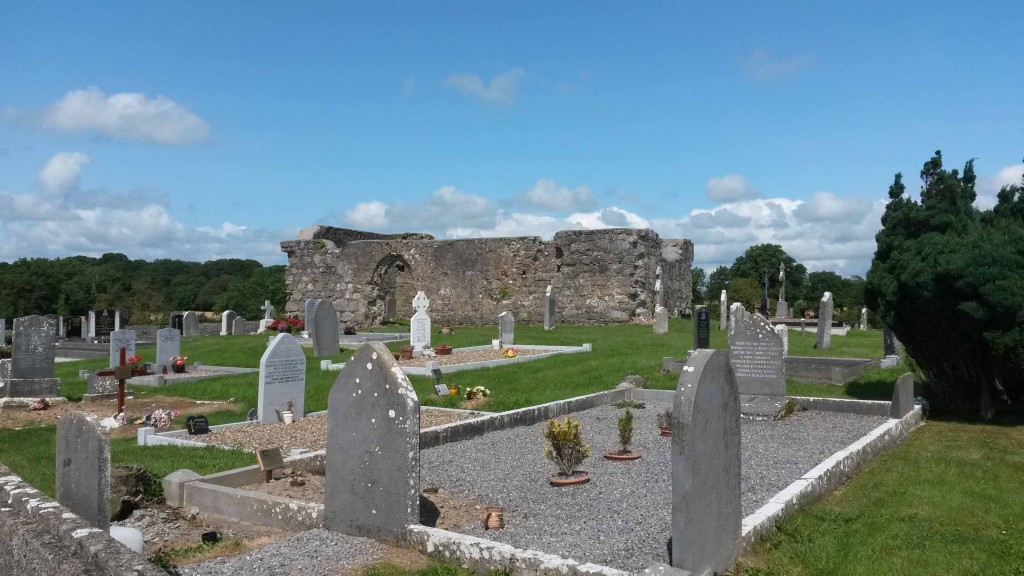 The O Kelly of Gurtray plot in the foreground with the remains of the medieval Kilmalinoge church behind.

Burial place of the Counts and Countesses de Gallagh and Tycooly

The Counts O Kelly de Gallagh and Tycooly were one of the most senior surviving lines of that name and a junior line of that branch came to be seated at Gurtray in the parish of Kilmalinoge, in close proximity to the old church, in the early nineteenth century. Hugh O Kelly of Lisdalon, the last chieftain of Uí Maine and who flourished in the late sixteenth century, died without male issue. No identifiable descendants of his immediate family or of lines more senior to that of Gallagh and Tycooly such as the O Kellys of Mullaghmore were known in the early nineteenth century or became extinct and in 1944 the senior-most male member of the Counts O Kelly of Gallagh and Tycooly was recognised by the then Chief Herald of Ireland as Chief of the Name.

Descended from Teige dubh O Kelly of Gallagh, chieftain of Uí Maine or Hy Many who died in 1513, William O Kelly served as a captain in the army of King James II and, following the loss of his ancestral lands at Gallagh, settled at Tycooly in the parish of Killosolan in County Galway.[i] He leased these lands from his wife’s family, the Dillons of Clonbrock. His grandson Dillon John O Kelly, son of William’s second son Festus, left Ireland and served in the Austrian army. In 1755 he married Marian, Countess of Klenowa, a favourite of the Empress and widow of the Hereditary Treasurer of Bohemia but had no issue.

In recognition of what was described as ‘the great antiquity and celebrity’ of the family of Festus O Kelly and ‘having also favourably considered the faithful and praiseworthy military services that have been rendered by his son Dillon John O Kelly of Gallagh and Tycooly during the last eleven years and which are still being rendered by him in the capacity as Captain’ the Empress Maria Theresa of Austria in November of 1767 granted to Festus O Kelly ‘the Imperial and Royal grace of being raised, he and all his legitimate descendants and their heirs, whether male or female, to the rank and dignity of Counts and Countesses of our Kingdom, Principality and Hereditary States’, and in addition granted to them the title of ‘hoch und wohlgeborn’. While Dillon John O Kelly was childless, by virtue of the grant being issued to his father in Ireland, the title of Count would nonetheless remain within the immediate family descended from his father.

Having served in various positions within the Empire, including Ambassador from the Emperor of Germany to the Elector of Saxony and risen to the position of Grand Chamberlain, Dillon John O Kelly, Count of Gallagh and Tycooly, died in Austria in 1811. His heir was his senior-most nephew in Ireland, Festus O Kelly, son of Conor O Kelly of Tycooly.[ii]

Festus O Kelly married Marian, daughter of Ambrose Madden of Annaghcalla, then in the parish of Clonfert and had at least two sons; Cornelius Joseph and Ambrose Madden O Kelly. While Cornelius, the eldest son, established himself on an estate near Tuam where he built a new seat which he called Gallagh Castle, their second son, Ambrose Madden O Kelly leased Gurtray House in the parish of Kilmalinoge in 1830.[iii] (From Cornelius descended the more senior line of Gallagh and Tycooly whose senior-most member was recognised in 1944 by the Chief Herald of Ireland as Chief of the Name.)

Ambrose Madden, born in 1803 or 1806, married Theresa Joyce in 1836 and had four sons and four daughters. Theresa died in 1851 and was buried in the graveyard of the medieval church of Kilmalinoge, across the fields from Gurtray. When Ambrose died in 1863 he was interred beside his wife in the family burial plot. He was succeeded by his eldest son Ambrose Michael Madden O Kelly, Count of Gallagh and Tycooly, who died four years later and was buried beside his father. (The headstone to their memory above their burial place, however, gave Ambrose Michael Madden as Ambrose Madden.)

As Ambrose Michael died without a son, he was succeeded at Gurtray by his brother William Patrick who died in 1876 at the age of about thirty-two years.[iv] On the death of William Patrick, John Appleyard O Kelly, the third but eldest surviving son of Ambrose Patrick Madden O Kelly of Gurtray, at the age of approximately twenty-nine years, succeeded to Gurtray. Gerald Alban, born in 1849, the youngest son of Ambrose Patrick, married Eleanor Higgins of Ottawa, Canada and died in 1881. All four sons and their sister Theresa were buried at Kilmalinoge, as were a number of the descendants of John Appleyard O Kelly. 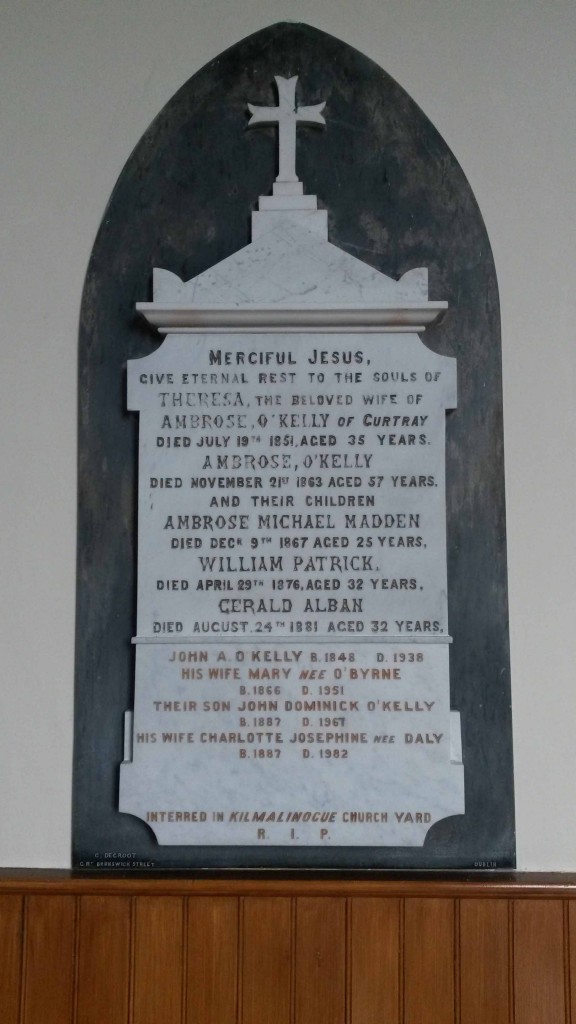 A wall memorial to the O Kellys of Gurtray erected in the Roman Catholic parish church of Boula, near Gurtray and Kilmalinoge. 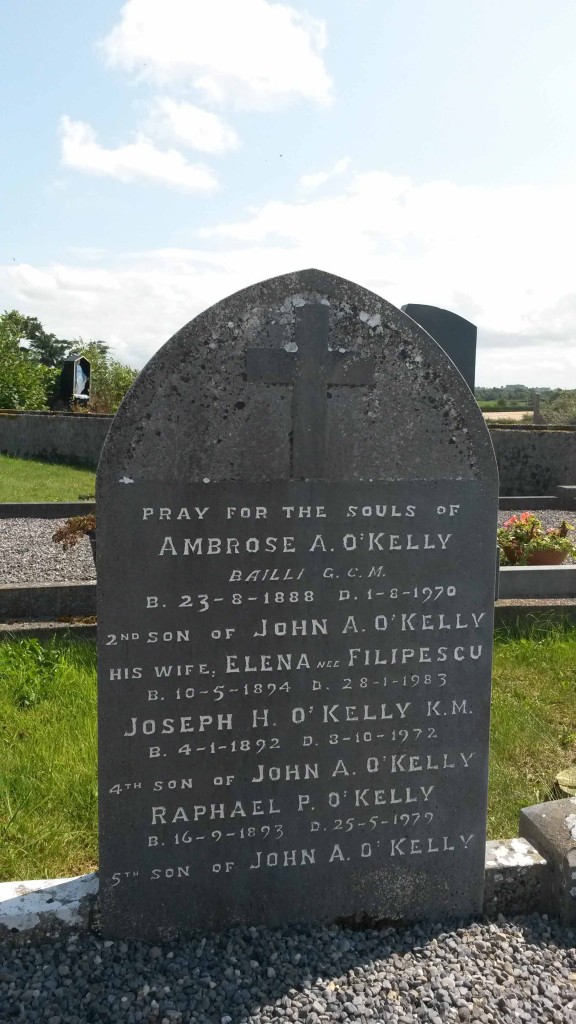 One of the headstones erected at the O Kelly burial plot at Kilmalinoge. Several of the family were Knights of the Sovereign Military Hospitaller Order of St. John of Jerusalem of Rhodes and of Malta and members of the Irish Association of that Order, with Count Ambrose Alexander O Kelly, second son of Count John Appleyard holding the rank of Bailiff Grand Cross of Honour and Devotion.

Count Eoin Peter O Kelly de Gallagh and Tycooly, the senior-most grandson of John Appleyard O Kelly, was the last of the male line to reside at Gurtray and, dying in 2004, was buried in Kilmalinoge. As his sister Maureen Jeanne was unmarried, Gurtray passed to the Deasy family as a result of the marriage of Count Eoin O Kelly’s sister Sheila Marie to Rickard Deasy of Carrigahorig, Co. Tipperary. The O Kelly family maintained their connection with the family burial plot, with Count Eoin O Kelly’s sister Countess Maureen O Kelly de Gallagh and Tycooly interred there following her death in September of 2013.

Among the earliest surviving headstones in the church and graveyard are two located within the church against the internal face of the west gable. The earlier of the two is a fragment of a broken stone, bearing the inscription; 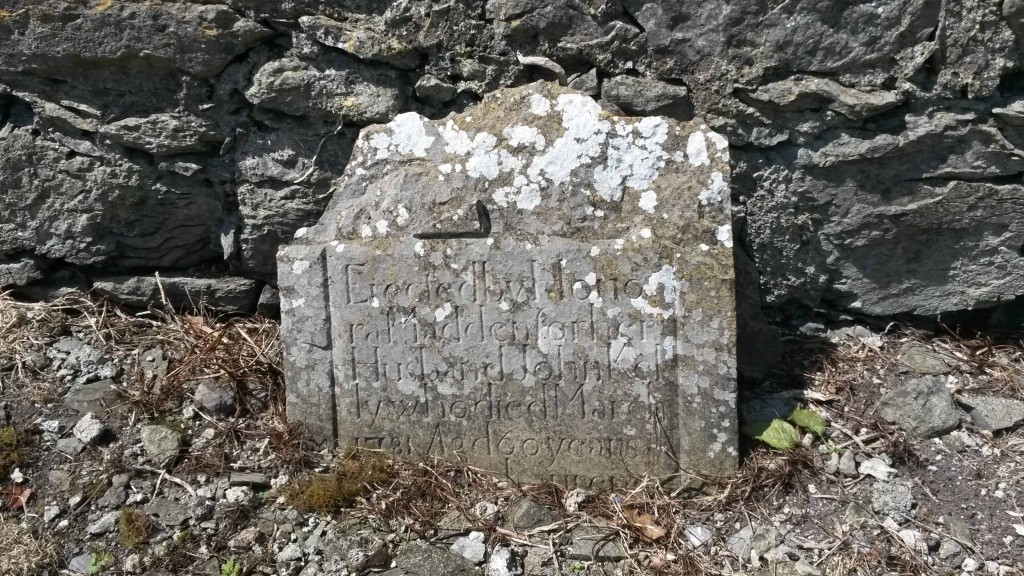 Beside this fragment stands a finely but primitively ornamented headstone bearing the inscription;

‘IHS O Lord have Mercy on the soul of Morgen Kelly who depard Life .in May in the year 1801 age,d 60 years also his wife and son honour and Michael Kelly Erected by his son Laurence kelly’ 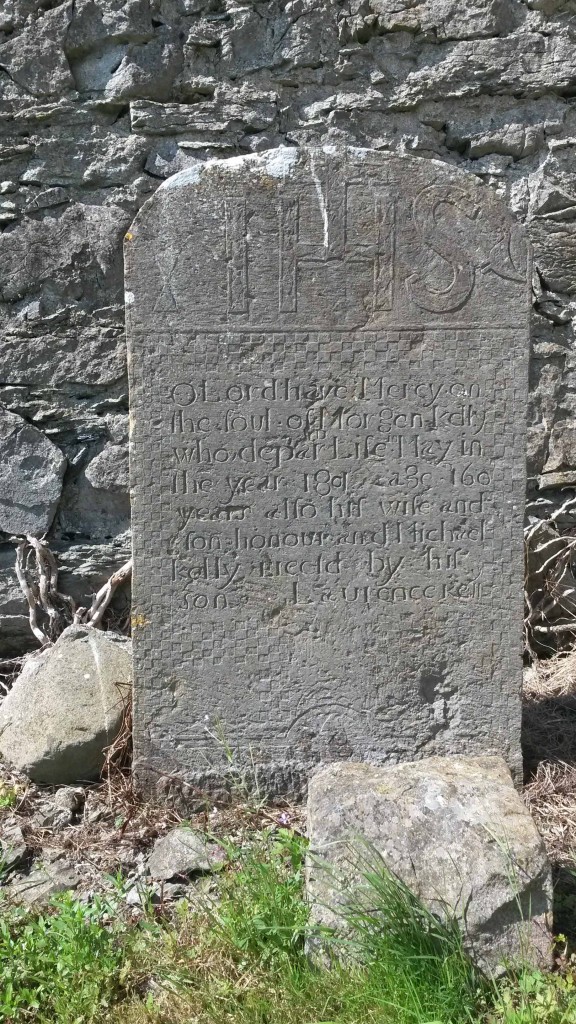 The earliest of the surviving headstones are located to the south of the church and date from the mid eighteenth century. 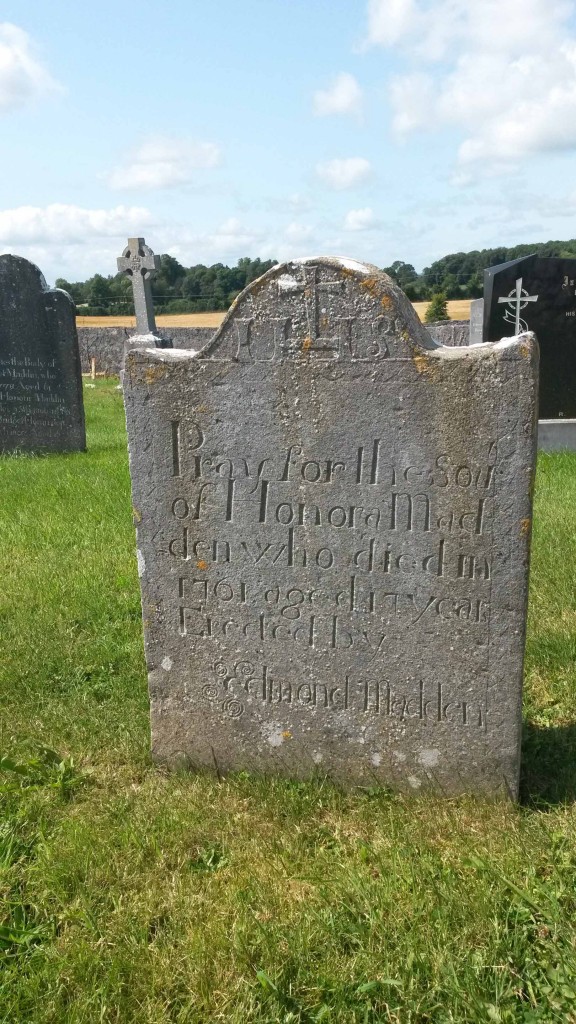 Nearby lies the finely carved and ornamented headstone to another Madden from the same period, bearing the inscription; 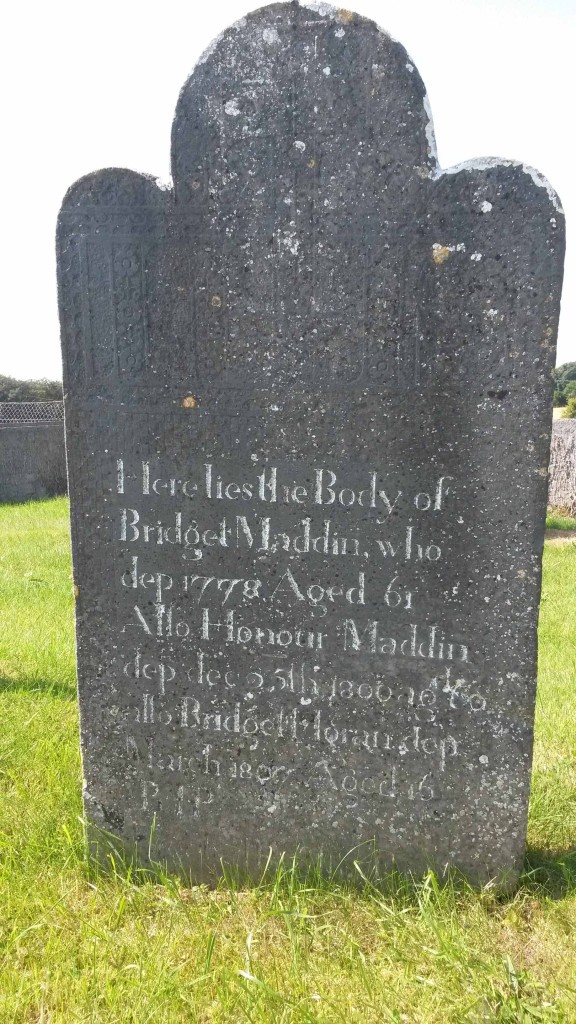 Of these earliest stones, the most finely and elaborately carved, bearing symbols and images from the Passion of Christ, dates from the early nineteenth century and commemorates members of a Shaughnessy family;

‘IHS O Lord be merciful to the Soul of Hugh Shoughnasy who departed this life Janr,y the 1st 1816 aged 20 years This Monument was Erected by his Father Jam,s Shoughnasy & his Mother Mary Shoughnasy Als Nolan for them & posterity Requiescant in pace Amen’ 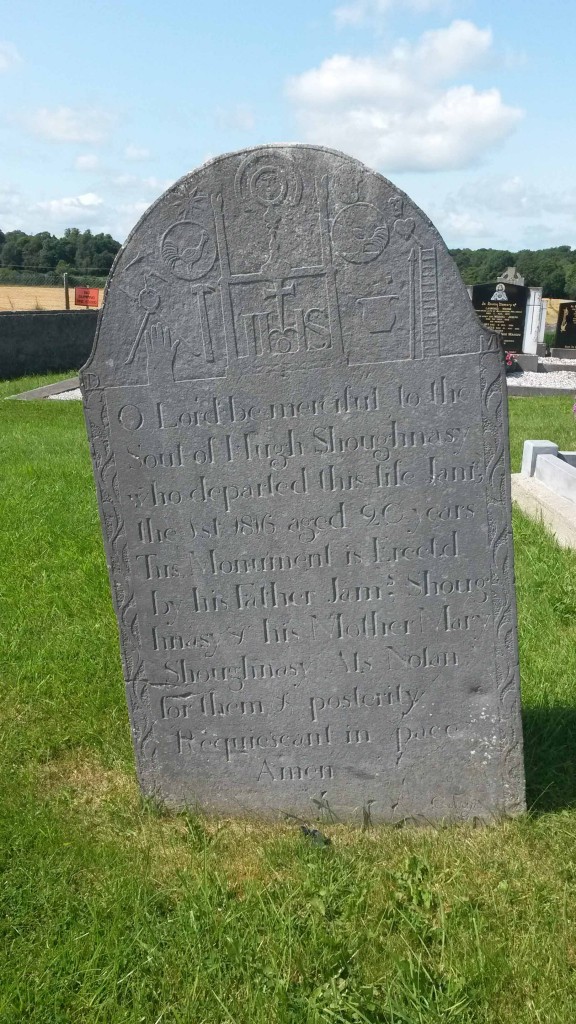 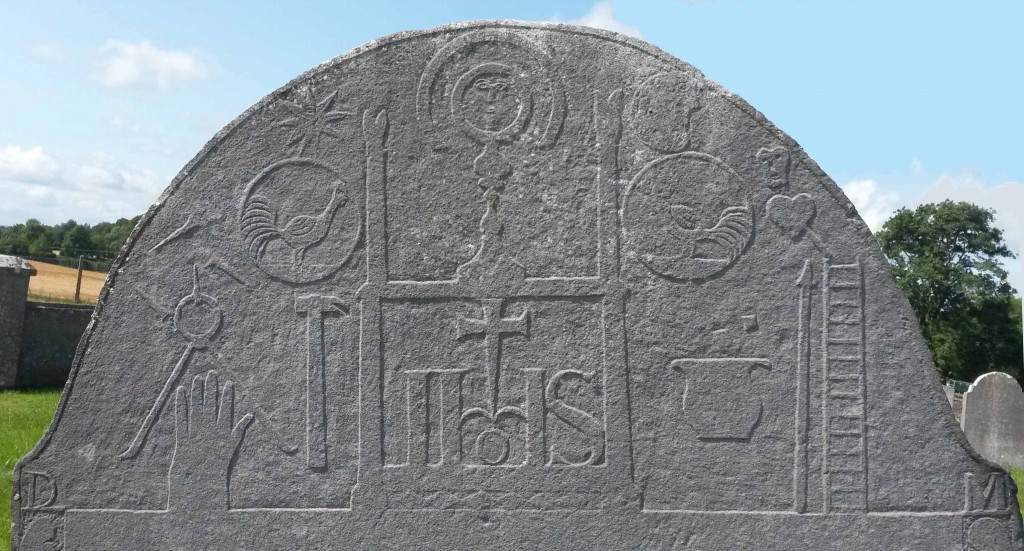 The sculptor’s initials DM are visible on either side of the crucifixion imagery (above). 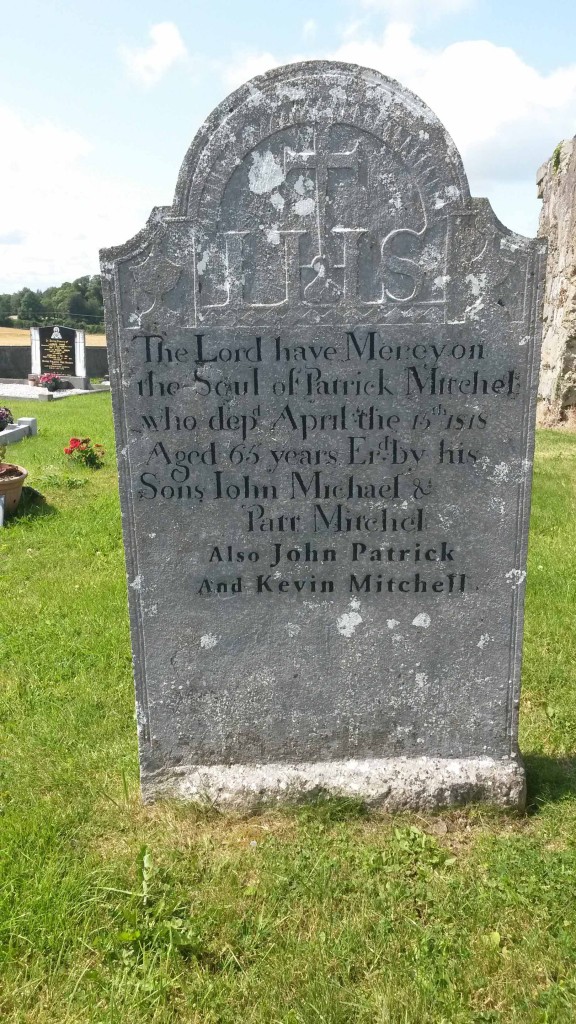 Headstone commemorating members of a Mitchel family dating from 1818.

In addition to these earliest surviving memorials, the graveyard contains numerous headstones from the nineteenth, twentieth and twenty-first centuries.