Sir Roger Brabason of Leicestershire is given as bearing for arms in the medieval period ‘Gules, on a bend Or three martlets Sable.[i]

The Brabazon family established in east Galway at Ballinasloe in the late sixteenth century descended from Sir William Brabazon, ‘sometime Lord Justice of Ireland’, who rose to prominence in England during the reign of King Henry VIII and claimed descent from a family seated at Eastwell, Leicestershire.[ii]

Captain Anthony Brabazon, the first of his family to be seated at Ballinasloe, was second son of this Sir William Brabazon. Married to Ursula, daughter of Sir Nicholas Malby, by whom he had two sons, Malby and Edward and a daughter Katherine, he died in 1597 and was buried in September of that year at Christchurch in Dublin.[iii]

The arms of this Captain Anthony Brabazon were recorded at the office of the Ulster King of Arms as ‘Gules on a bend Or three martlets Sable and, above the bend, a crescent Argent identifying the armiger as the second son. No crest or motto was depicted.[iv] 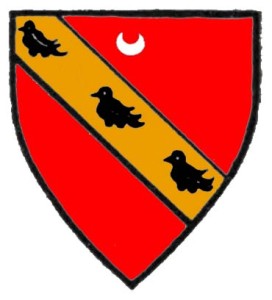 Arms of Captain Anthony Brabazon of Ballinasloe, died 1597, as recorded in his funeral entry in the records of the Ulster King of Arms.

An illustration of the arms of Brabazon of Ballinasloe was also depicted in the funeral entry in the Office of the Ulster King of Arms of the Rt. Hon. John Burke, Viscount Clanmorris, who died at his manor house of Dunsandle on the 16th November 1633. A younger son of Ulick, 3rd Earl of Clanricarde, he married Katherine, the daughter of Captain Anthony Brabazon of Ballinasloe. The then Athlone Pursuivant had his funeral entry depicted in the office of the Ulster King of Arms with his paternal arms of ‘Or a cross Gules in the dexter canton a lion rampant Sable’ impaled with the arms of his wife’s father ‘Gules, on a bend Or three martlets Sable.’ The impaled arms were shown below a coronet of rank, without crest, supporters or motto.[v] (Another illustration in the records of the same office gives this Viscount Clanmorris bearing a mullet Argent at centre-point as an indication of his being the third surviving son of the Earl.)[vi] The arms representing Katherine’s family in Viscount Clanmorris’s arms did not display her father’s crescent cadency mark, it being commonly taken that, as a wife, her own position in her father’s family as identified in heraldry was adequately differenced by the impalement of the Brabazon arms with her husband’s.[vii]

The same Brabazon arms were borne by their contemporaries of the senior line of the family, descendants of Edward Brabazon, Lord Baron of Ardee, eldest son of Sir William Brabazon and elder brother of Captain Anthony Brabazon of Ballinasloe.[viii] The arms of Sir Anthony Brabazon, knight, the third son of Edward Lord Brabazon, Baron of Ardee, circa 1636 being shown as ‘Gules on a bend Or three martlets Sable’ and, above the bend, a mullet Argent, identifying him as the third son. His arms were impaled with those of his wife, which was shown empty in the records of the Ulster King of Arms.[ix]

The arms of William Philip Brabazon of Brook House, Lymm, near Warrington, eldest son of Philip Brabazon of Strokestown, Co. Roscommon, were given in the early twentieth century as ‘Gules, on a bend Or, three martlets Sable, mantling of Gules and Sable with a crest, on a wreath of the colours, On a mount Vert, a falcon rising Or and for motto ‘Vota vita mea.’[x]

[ii] Egan, Rev. P.K., The Parish of Ballinasloe, its history from the earliest times to the present century, Clonmore & Reynolds, Dublin, 1960, p. 69.