The Dolphin family were of Anglo-Norman origin and held their lands under the de Burgh lords of Connacht and Earls of Ulster from at least the thirteenth century. John Dolfyn was tenant of Galboley and of Rathgorgin before 1251, between the medieval centres of Athenry and Loughrea in de Burgh’s demesne cantred of Maenmagh.[i] When Richard de Burgh came into his inheritance in 1280 as Earl of Ulster and Lord of Connacht, John Dolfyn was still holding Rathgorgin and Galboley.[ii]

Despite the resurgence of Gaelic power in the aftermath of the murder of the Brown Earl, the Dolphins retained lands north of Loughrea and were still prominent locally into the sixteenth century, their patrimony known as ‘Eraght Dolphine,’ the ‘oidhreacht’ or ‘inheritance’ of Dolphin.[iii] Gaelicised by the sixteenth century, the head of the family came to be known as The Dolphinagh and, alongside John Wall and Ulick oge beg Burke of Dunsandle, was listed as one of the chief men of the half barony of Athenry in 1574. In that year the Dolphinagh was given as holding the tower house at Raruddy, which denomination was divided about the early modern period between the baronies of Athenry and Loughrea, while one Walter Dolphin was given as resident at Moyode, near and to the south-west of Rathgorgin. In the same barony Ulick Burke, however, was holding the castle of Rathgorgin at this time, while Galboley in 1574 was held by Oliverus roe Burke of Benmore, great-grandson of John na bhfiacail Burke, tanist of Clanricarde, who died in 1507. The greater part of the property of landholders of the name Dolphin in the early and mid seventeenth century lay in the same region north of Loughrea, in the parishes of Kilconickny, Kiltullagh and Killimordaly.

One of the earliest surviving references to arms borne by a member of the Dolphin family established in east Galway dates from the early eighteenth century and relates to those to which Henry Dolphin, a physician of Bruges, was entitled. Henry was born in Ireland but emigrated to the Continent where he studied medicine at the University of Louvain. He received his degree of licentiate in medicine at Louvain on the 16th May 1704 and thereafter settled at Bruges in Flanders. Correspondence survived in the archives of the Bibliothèque Nationale in Paris dating from 1715 between this Dr. Henry Dolphin and John Terry, Athlone Pursuivant to the Stuart Pretender to the throne of Great Britain and Ireland at his court in exile in France. In that correspondence Dolphin provided genealogical details and sought an official confirmation of his social status based on that pedigree and ‘to have the armes of (his) family and alliance.’[iv] While he received his document from Terry confirming his status as an armiger and his descent of the ‘tres Ancienne famille de Dolphins’ with his arms depicted thereon, no blazon or exemplification survived in the correspondence describing the same arms.

Sir John Bernard Burke in his 1862 edition of ‘A Genealogical and Heraldic Dictionary of the Landed Gentry of Great Britain and Ireland,’ gave one of the two principal branches of the name in Ireland as of Galboley and later of Turoe in County Galway. This line he gave as descended from Hubert Dolphin who was resident at Galboley in 1691. According to Burke, ‘during the civil wars the Dolphins, in common with most of the Roman Catholic families in Connaught, sustained great losses by confiscation and forfeitures, which caused many members of the family to emigrate.’ Hubert Dolphin’ in the words of Burke, ‘preferred remaining in his native country, in the hope of preserving some of their property.’ In Burke’s pedigree Hubert Dolphin of Galboley married firstly Sarah M. Burke of Derryhoyle and married secondly a Miss Deane. By his first wife he had two sons and a daughter; John, Thomas and Celia. By his second he had two sons; Dominick and Alban.

John, the eldest son of Hubert by his first wife, was his heir, while Thomas was described as ‘a clergyman at Esker Convent.’ His daughter Celia married a MacHugo of Ballybroder. Of Hubert’s children by his second marriage, Dominick married a Miss Daly of Benmore and Alban who ‘married and left a family.’

The senior-most line descended from Hubert of Galboley continued in his son John Dolphin ‘of Goulbully and Turoe’, the family taking up residence at Turoe in a house adjacent to what would be the ruins of the earlier Galboley castle. Hubert, however, had another son by his first wife, named Henry, who was not recorded in Burke’s 1862 account.

The family genealogy provided by Dr. Henry Dolphin to Terry described him as the son of Humbert Dolphin and gave Humbert’s wife as Sara the daughter of Henry Burke son of Myles or ‘in Irish Mylish more’ of Iserclerane etc.’ ‘Humbert’ was the same individual as that Hubert whom Burke gave as married to Sarah Burke of Derryhoyle. In Henry Dolphin’s genealogy, his father Hubert was the son of John son of William son of Walter son of Stephen son of Arthur ‘son to Sir Thomas Dolphin who came from England to Ireland and had a great estate, called in Irish Ieraghte Dolphin in the County of Galway from Loughreagh to Athenry.’ The genealogy is clearly missing numerous early generations of the family between the first arrival in Ireland and those generations closer to Henry, but it is likely to be accurate at least with regard to the subject’s grandfather and possibly great-grandfather.

The arms of the Dolphin family of Turoe, descended from Hubert Dolphin, resident at Galboly in 1691, are given on a nineteenth century family tomb constructed in the choir of the medieval Carmelite abbey in Loughrea. The tomb was erected in memory of Oliver Dolphin, Esquire, of Turoe, who died in February 1805 at the age of sixty eight years, by his widow Margaret Helen Dolphin alias Collins and the arms of Dolphin appear on four occasions on three of the side walls of the tomb.[v] The arms appear as three slender dolphins naiant upon a field that the carved pattern indicates as Azure. Above the shield the crest, on a wreath, appears as a dolphin hauriant and below, upon a scroll, the motto ‘Firmum in vita nihil.’ 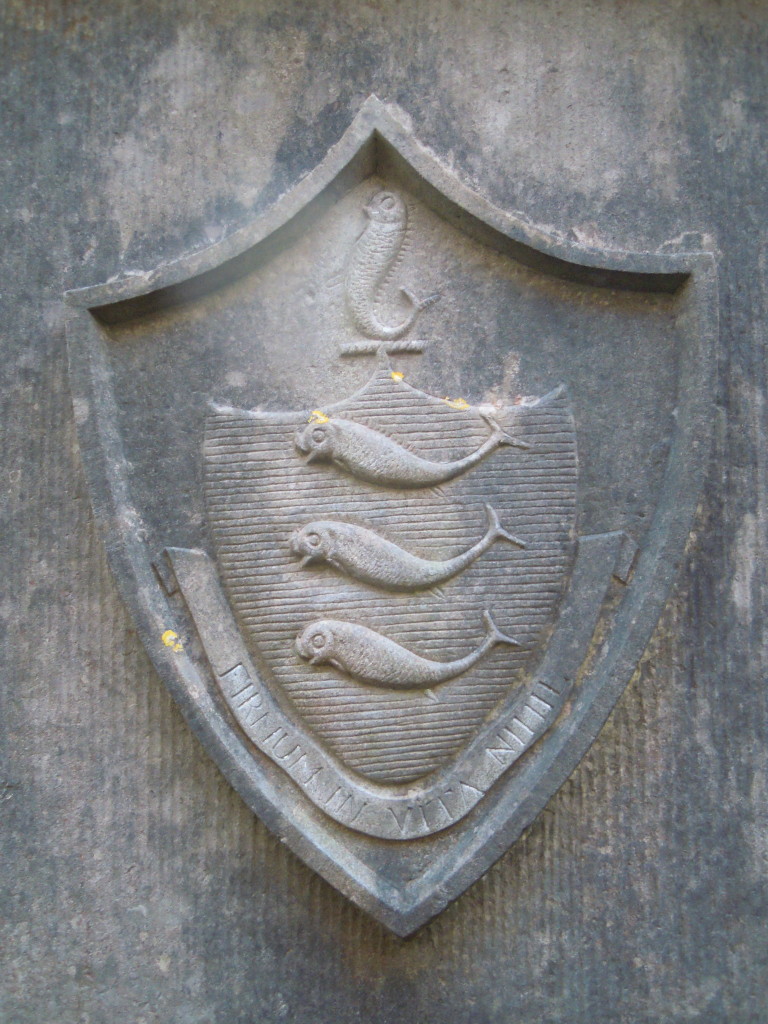 The arms of a later Oliver Dolphin, Esq. of Turoe, Co. Galway, born in 1805, son of Hubert Thomas Dolphin, Esq. of Turoe and Mary, daughter of Peter Graham, Esq. of Dublin, was given by Fox-Davies as ‘Azure, three dolphins naiant Proper.’ For crest he bore ‘a dolphin salient (recte: hauriant) Proper and for motto ‘Firmum in vita nihil.’[vi] This Oliver, who succeeded to Turoe, was the eldest grandson of that Oliver who died in 1805 and the arms described as his are the same as those on the family tomb. 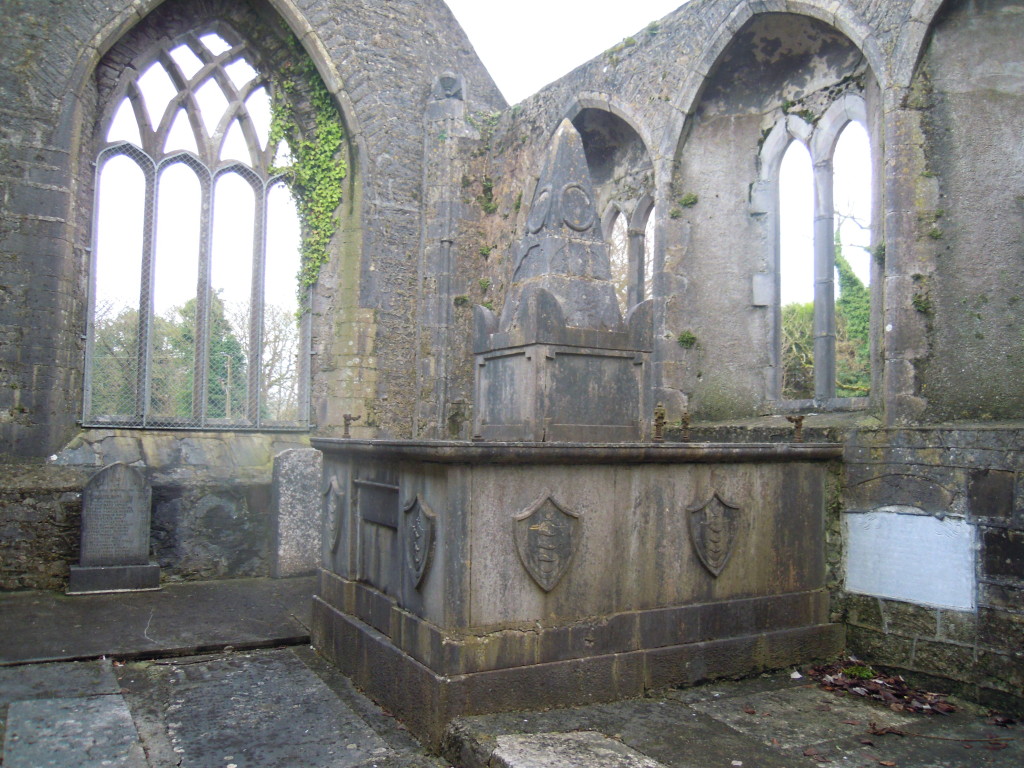 The Dolphin tomb in the choir of the abbey at Loughrea

Peter Hubert Dolphin of Danesfort, Lisduff, in the parish of Bullaun, younger brother of this Oliver Dolphin and second son of Hubert Thomas Dolphin of Turoe died in 1898. A significant Roman Catholic landed proprietor in the latter years of the nineteenth century, he was buried in the graveyard, outside of the church ruins itself, at the rear of the medieval Carmelite Abbey in Loughrea with which his family were intimately connected. Having no sons but two daughters by his wife Antoinette MacEvoy, his last surviving daughter Mary Teresa erected a headstone above the family grave to the memory of her parents, sister, uncle Christopher MacEvoy and aunt Monica Dolphin prior to her death in September 1949. Surmounted by a large crucifix, the white marble headstone bore, within a small circle, the crest of the family, a dolphin hauriant embowed upon a wreath. The same Mary Teresa Dolphin was responsible for the renovation in 1918 of the family tomb inside the choir of the abbey church. 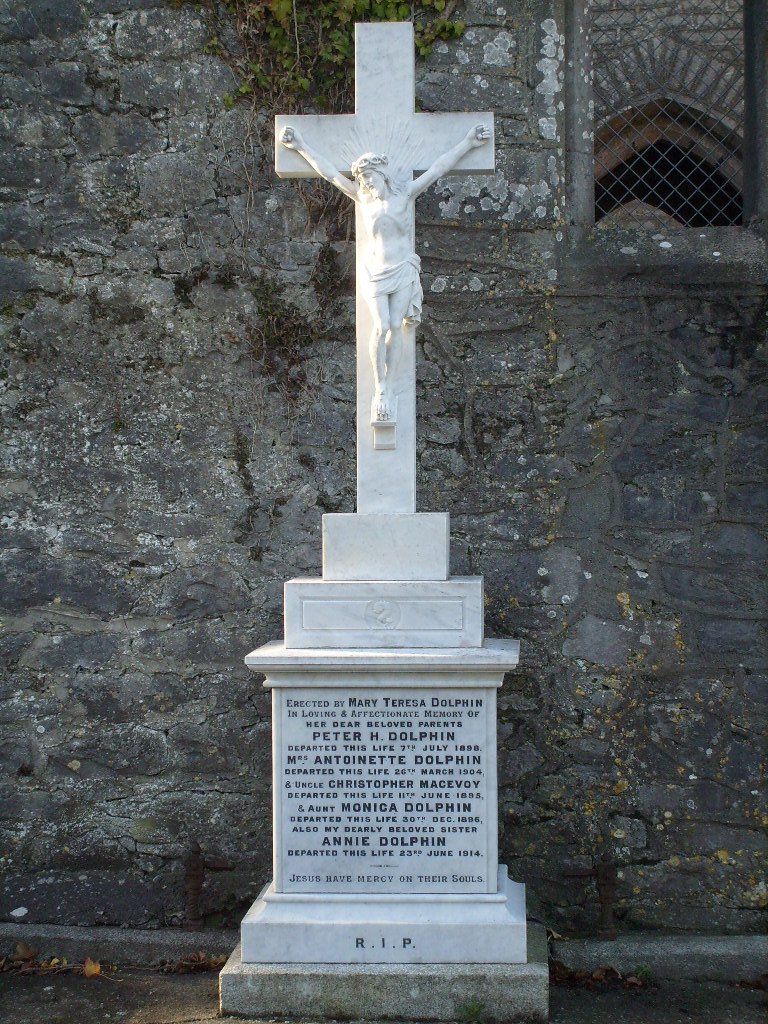 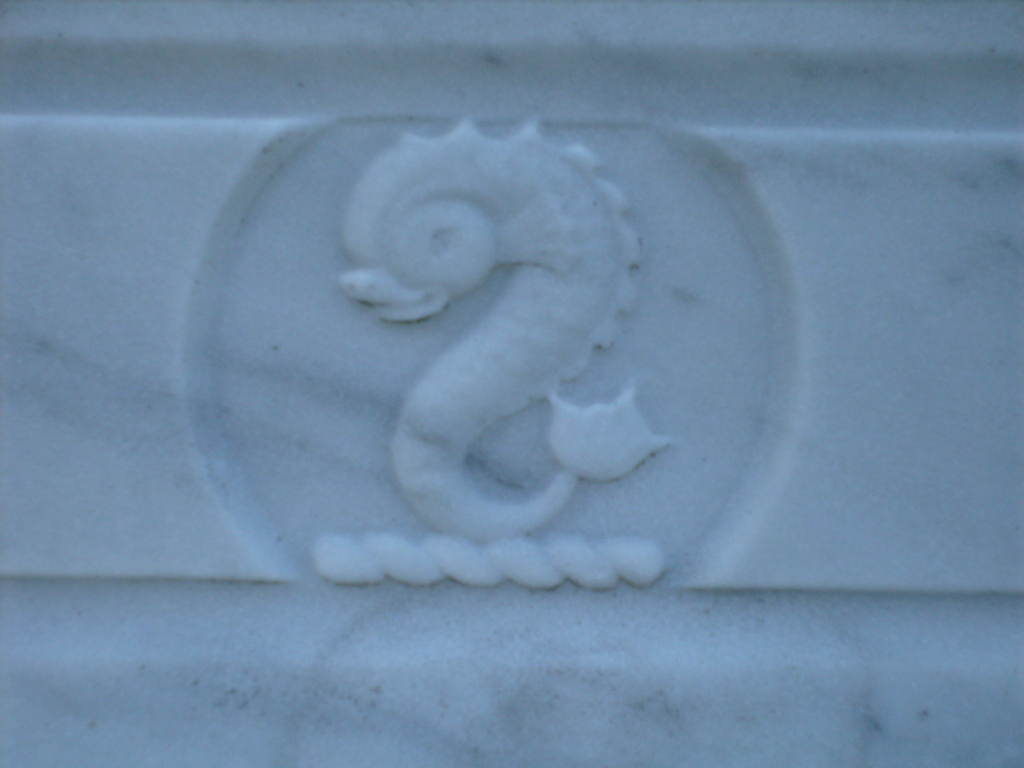 The arms of the Dolphin family of Corr, parish of Kilmalinoge in the barony of Longford in east Galway, kinsmen of the Dolphins of Turoe, was given by Sir Bernard Burke as the same as that of Turoe.[vii]

A small carving in high relief in alabaster, presented to Clonfert Museum, Loughrea, displayed on its dexter side the arms of Dolphin, described as ‘three dolphins haurient (recte: naiant) Proper’ and on the sinister a crucifix. The carving, found near Loughrea, was thought to have possibly formed, at one time, part of a tombstone.[viii]

For further details on this family, refer to ‘Dolphin’ under ‘families’.

[ii] The Thirty-sixth Report of the Deputy Keeper of the Public Records and the Keeper of the State Papers in Ireland, Dublin, Alexander Thom & Co., 1904, Appendix, Accounts of the Great Rolls of the Pipe of the Irish Exchequer for the reign of Edward I, Pipe Roll, x Edw. I,  pp. 62-65.

[iii] Hardiman, J., A Chronological description of West or h-Iar Connaught, written A.D. 1684 by Roderick O Flaherty Esq., author of the ‘Ogygia’, edited from a manuscript in the library of Trinity College Dublin, with notes and illustrations, Dublin, Irish Archaeological Society, 1846, p. 325.

[iv] NLI, Dublin, Pièces Originales: Papers relating to the history and genealogy of members of various families of Irish origin in France, 17th and 18th centuries, microfilm copies of originals in the Bibliothèque Nationale, Paris, n.546, p.133, No. 22,983, Dolphin.

[v] ‘IHS, Sacred to the memory of Oliver Dolphin Esquire of Turoe, who departed this life on the 9th day of February in the Year of Our Lord 1805 aged 68 years. This monument was erected by his disconsolate widow Margaret Helen Dolphin alias Collins as a sad tribute to the virtues of the best and tenderest of husbands, the truest and most sincere of friends and the most charitable and benevolent of men.’