Edward MacLysaght wrote in his ‘Irish Families, Their Names, Arms and Origins’ that Cannon was ‘the anglicized form of the name of two quite distinct Irish septs. Though identical in English these two are different in Irish. One is Ó Canáin: this is a Hy Many (Ui Máine) sept of the same stock as the O Maddens and belongs to southern Co. Galway though nearly extinct there now.’ The other sept to which MacLysaght made reference was that of Ó Canannáin, abbreviated to Ó Canann, ‘an old Tirconnell sept, whose chiefs the annalists call Kings of Cinel Conaill: it was subjugated by the powerful O Donnells in the thirteenth century and sank into obscurity.’ MacLysaght was careful also to make clear that ‘Cannon is not used as an abbreviated form of the well-known Connacht name Concannon,’ also associated with County Galway.[i]

Those of the name O Cannon of Gaelic origin (as opposed to McCannon) were also differentiated by MacLysaght from two others of different extraction; those of English extraction who bear a common English surname derived from the ecclesiastical word ‘canon’ and those of Huguenot extraction, descended from French Protestant refugees.

The early fifteenth century Gaelic Book of Lecan gave the name Ó Canáin as Ua Canain and gave their descent from the Uí Maine family group, whose ancestor has traditionally been held to be one Maine Mór, son of Eochaidh feardaghiall, chieftain of a tribe of people who established themselves as the dominant group in the south-eastern region of Connacht by about the end of the fifth century.[ii]

Maine Mór and his descendants appear to have subjugated many of the existing tribes and peoples that inhabited their land and established a petty kingdom, covering much of the later east Galway named from their progenitor as Uí Maine (later Anglicised Hy Many). The descent of Ua Canain was given more specifically from a junior sub-group of the Uí Maine known as the Síol Anmchadha (ie. ‘the seed or progeny of Anmchadh’). 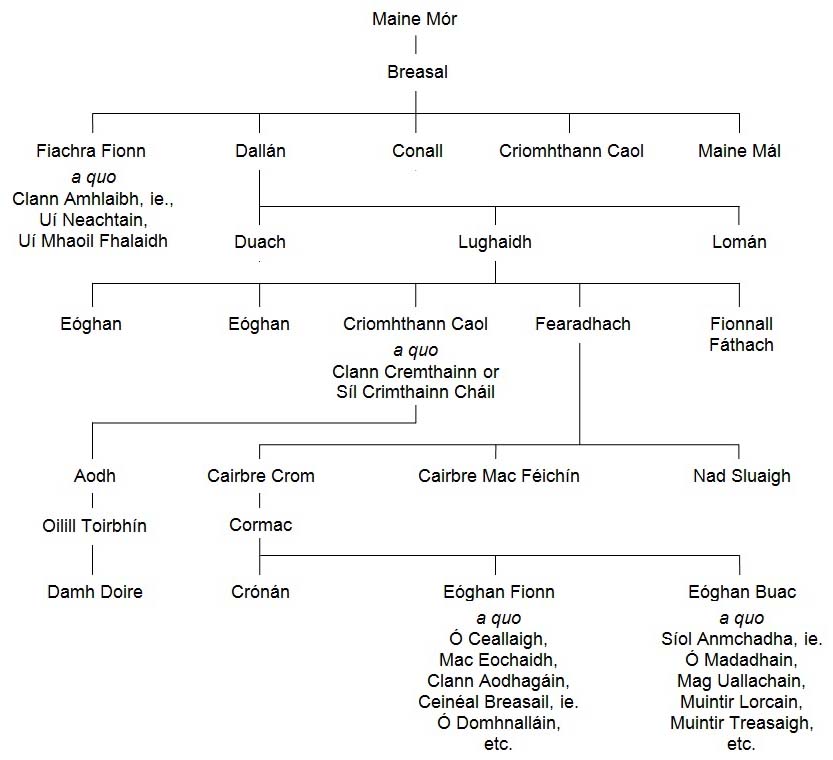 While the dominant family of the Uí Maine came to be the O Kelly chieftains of that wider territory in eastern Connacht, the O Maddens came to be the senior-most family group descended of the Síol Anmchadha. The O Maddens were said to be descended from Donngalach, the eldest of the three sons of Anmchadh son of Eoghan buac son of Cormac son of Cairbre crom, while the Ua Canain or O Cannons, together with the Muintir Lorcain or O Lorcain, MacCeallaigh, Ua Finnachtaigh, Ua Coscraidh, Ua Maenaigh, Ua Connachtain and Ua Maelduibh, were given in the Book of Lecan as descended from Forbasach, the third and youngest son of Anmchadh.[iii] (The Book of Lecan gives Forbasach as the youngest of three sons of Anmchadh while Dubhaltach MacFirbisigh in his seventeenth century ‘Great Book of Irish Genealogies’ gives Forbasach or Forbhusach as the second son of Anmchadh and Fianghalach as the youngest of the three sons.) 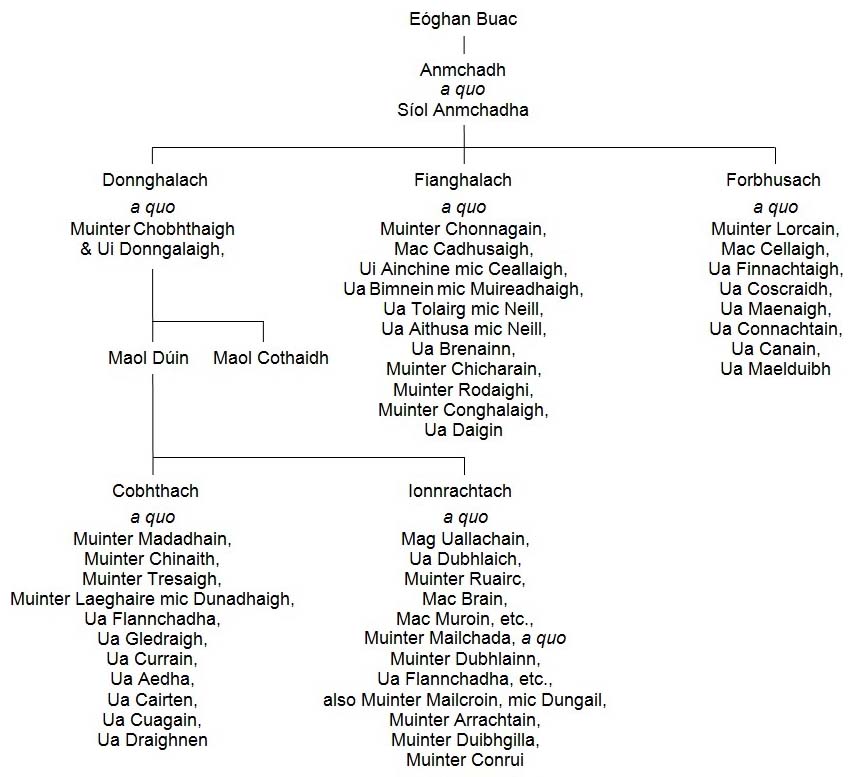 The territory of Síl Anmchadha that came to be ruled by the O Madden chieftains was located in the east of what would later be known as County Galway, and equated for the most part with the barony of Longford in east Galway. However, not all of the lands associated with all of those families descended from Anmchadh were located within Síl Anmchadha and no specific ancestral lands either within or without that territory in County Galway can be ascribed to the O Cannons in the medieval, late medieval or early modern period. The name seldom clearly occurs in early records and no member of the name was given as a significant landed proprietor of land in the county in the early or mid seventeenth century.

Although MacLysaght described the name in the mid twentieth century as almost extinct in County Galway, one hundred years earlier, in the mid 1850s, there were approximately forty-one households of the name Cannon in County Galway, for the most part located in the east and south-east of the county.