This branch of the wider Trench family was of the same descent as the Trench family at Garbally. They descend from Frederick Trench of Garbally, who married Elizabeth, daughter of John Eyre of Eyrecourt. This Frederick died in 1752 and was succeeded at Garbally by his son Richard, from whom descended the Trench Earls of Clancarty.  Frederick Trench’s second surviving son, Eyre Trench of Ashford, County Roscommon, who died in 1775, married Charlotte, daughter of Kean O Hara of Dublin and was succeeded by his only son Rev. Frederick Eyre Trench.[i]

John Eyre Trench, born in 1798, the eldest son of the Rev. Frederick Eyre Trench of Kellistown, Co. Carlow, acquired the lease of the former Bishop’s Palace at Clonfert and part of the estate of the Protestant Bishop’s See from the Protestant Ecclesiastical Commissioners when that Bishopric was abolished in 1834 and subsequently purchased the estate. In that same year he married Grace, the daughter of Rev. John Burdett, Rector of Banagher in Kings County and of Ballygarth, Co. Meath. In addition to the lands at Clonfert, he held estates in the baronies of Kilconnell, Tiaquin, Killian and Clonmacnowen in the mid nineteenth century.

He had two sons, Frederick Augustus and Charles O Hara Trench and four daughters, Margaret, Catherine, Grace and Charlotte. He died in February 1864 and his widow erected a memorial bearing his arms within the Cathedral at Clonfert, a short distance from their residence.

John Eyre Trench was succeeded by his eldest son Frederick, who died unmarried at Clonfert House three years later at the age of thirty-two years.[ii] Charles O Hara Trench, Frederick’s younger brother, thereupon succeeded to the estate at Clonfert and the former Bishops Palace, which became known as Clonfert House. 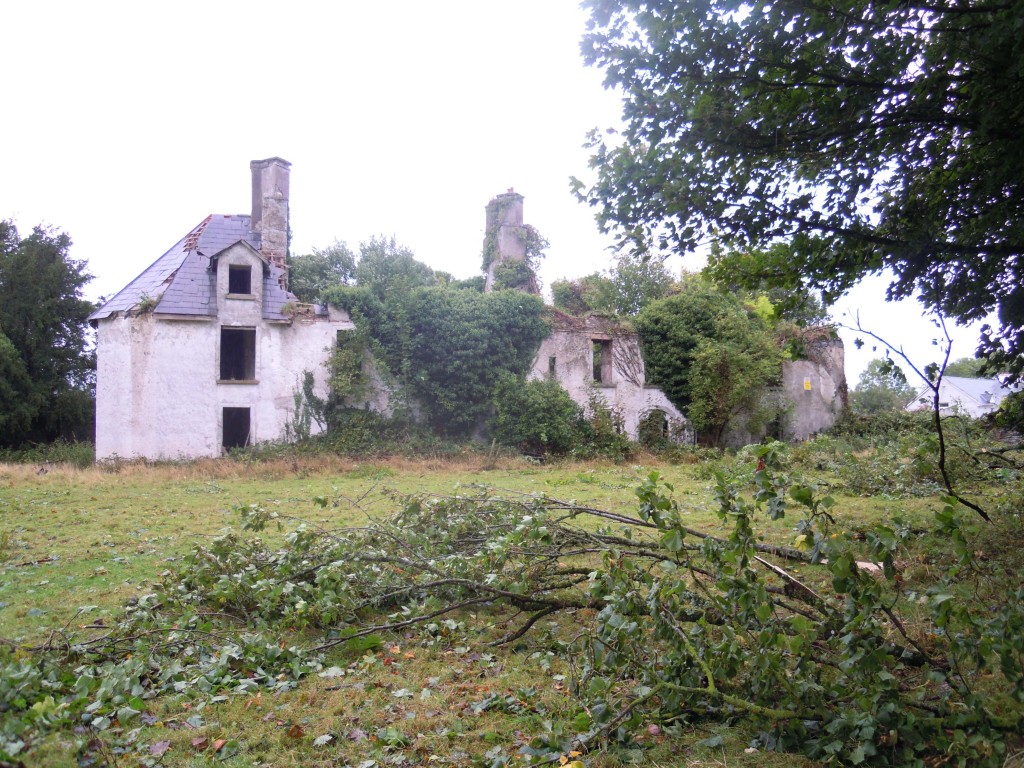 The ruins of Clonfert House, formerly the residence of the Protestant Bishop of Clonfert.

In 1901 Charles O Hara Trench was resident at Clonfert when the Census of Ireland was conducted, with his two daughters, Violet Madelaine Maud and Moira Sophia and four servants. Four years later Violet would die at the age of twenty-four years.

Ten years later Charles O Hara was sixty-five years of age and resident still at Clonfert, where he described himself as a Magistrate and landowner, along with his eldest son John Arthur Burdett, described as a farmer and his youngest daughter Moira, then aged twenty eight years, all members of the Protestant Church of Ireland. One twenty three year old male visitor was present on the evening of the Census being taken that year, Leslie Loxley Firth.[iv] Eight servants were occupied in the house on that occasion, including a servant to the cook.

Charles O Hara’s second son, Charles Frederick, born in 1885, attained the rank of Major in the 7th Hariana Lancers in the Indian army and was awarded the Distinguished Service Order for is service. At the end of his military career he held the rank of Lieutenant Colonel.

A noted sportsman and former member of the Irish polo team, John A. B. Trench, commonly known as ‘Jab’ or, from his exploits on the polo field, ‘Crasher’ Trench, married Mary Adelaide, daughter of John Lambert, Esq. J.P. in 1915 and that same year Charles Arthur Trench, their first child, was born. The couple had at least four sons, their second, Frederick Desmond being born in 1920 and third, Roderic Gore Trench (later of Redmount Hill, Eyrecourt) born in 1922 and John O Hara Trench, born in 1929.[v]

By 1941 the Irish Land Commission acquired and redistributed a significant amount of land from various estates about east Galway. About that time the Commission acquired 207 acres of the estate of John Arthur Burdett Trench of Clonfert House. Trench’s lands in the townland of Clonfert Demesne were distributed mostly among ‘a big number of uneconomic holders from Reask and Cartagh’ whose plots along the Shannon, liable to regular flooding, were described as ‘nothing but bog holdings and cutaway bogs.’[vi] A few families chose to remain for a time in their original holdings but the majority moved to the higher quality lands in Clonfert Demesne and built new dwellings there. The recipients of the Land Commission holdings were allowed to retain their land in Reask and Carta, which were regarded as of little
agricultural value.

In 1945 John Arthur Burdett Trench died after falling from his horse while foxhunting and the Trench family not long thereafter put up the old Bishops residence and their remaining 186 acres of land for auction in 1946 and left there in 1947.

The Clonfert property was acquired by a family named Blake Kelly, who converted the adjacent agricultural outbuildings into residential accommodation and sold the former Bishops Palace in 1951 to Sir Oswald Mosley, the former leader of the British Union of Fascists, who moved there to reside with his wife Diana Guinness alias Mitford.[vii] At Christmas of 1954 while the family were attending a Christmas party locally, the house was accidentally burned and the Mosleys left the following year, leaving the property to the Protestant diocese.

For the arms of this family, refer to ‘Heraldry.’

[ii] Urban, S., The Gentleman’s Magazine and Historical Review, London, Bradbury, Evans & Co., 1868, Vol. V, p. 120. ‘At Clonfert House, Co. Galway, aged 32. Frederick Augustus Eyre Trench esq. He was the eldest son of the late John Eyre Trench, esq. of Clonfert (who died in 1864) by Grace, third daughter of the late Rev. John Burdett, rector of Rynagh, King’s County and born in 1835. He represented a younger branch of the Earl of Clancarty.’

[iv] Their visitor was of the Church of England religion and declared that he derived his income from annuities and dividends.

[vi] Dáil Éireann debate transcripts- Vol. 129, 20 February 1952, Shannon Drainage – Motion.  In an earlier attempt about 1914 by the Congested Districts Board to alleviate the hardship experienced by some of those families in the parish of Clonfert whose lands were flooded by the Shannon, a number of families from Reask and Cartagh were allocated lands in the townland of ‘Abbeylands, near Eyrecourt’, and allowed to retain their flood-prone holdings. At that time, however, those families accepted the new holdings but instead of moving to the better quality land, sold them and remained on their original land.