By the early eighteenth century a family named Purefoy was resident at Gortnekelly on the western edge of the village of Eyrecourt. The seat came to be known alternatively as Woodfield, a direct translation of the place-name from the Gaelic.[i] The family, earlier of Caldecott and Wolvershall in Warwickshire, descended from one William Purefoy, living at Minsterton in Leicestershire in 1275.

The first of the family to reside in East Galway was James Purefoy, who was described as ‘of Gortnekilly, Co. Galway’, son of Arthur Purefoy of Skreen, Co. Meath, M.P. for Kells from 1661-1666. (The heraldic Visitation of Warwickshire of 1682, however, described Arthur, the sixth son of Gamaliel Purefoy, as ‘Arthur Purefoy of Ireland’ who ‘married ye daughter of a Bishop there but died without issue.’ The 1619 Visitation of Leicestershire also gave Arthur as without posterity.) Arthur’s elder brother William settled at Clonbulloge and Purefoy’s Place, King’s County in the seventeenth century and also served as M.P. for Ennis during the same period as his brother’s parliamentary term. Three of Arthur’s brothers were established in Ireland; William, Basil and Peter and were younger brothers of George Purefoy of Wolvershall or Wolveshill, son of Gamaliel Purefoy, son of George Purefoy of Wolvershall in Warwickshire, the fifth son of Michael Purefoy of Caldecott.[ii] (The 1682 heraldic Visitation of Warwickshire gaves George of Wolvershall as the third son, with William of Caldecott and John of Whitacre as his elder brothers and four other younger brothers who left no surviving issue by the latter seventeenth century. The more senior line established at Caldecott descended from William.)

The common element among many of those of the name Purefoy or similar would appear to have been a pair of hands. Guy Cadogan Rothery in his ‘Concise Encyclopaedia of Heraldry’ explains that, in Continental heraldry, the composition of a dexter and sinister hand issuing from the flanks or sides of the shield, the hands clasped in the fess point, is known as ‘foi’ or ‘faith’, suggesting ‘brotherly love.’ He states that this composition may be displayed in the form of a fess, that is, a horizontal composition across the shield or in various other arrangements such as ‘in bend’ or ‘in chevron’.[iii]

The shield of Purefoy or Purferoy of Caldecot, Warwickshire, from whom the family of Gortnekelly derived, were given in the mid nineteenth century as ‘Sable six armed hands, embracing Argent, two and one.’[iv] The same heraldic composition was given for the shield of George Purefoy of Wolvershall, eldest brother of Arthur of Skreen and uncle of James of Gortnekelly, in the 1682 Visitation of Warwickshire. 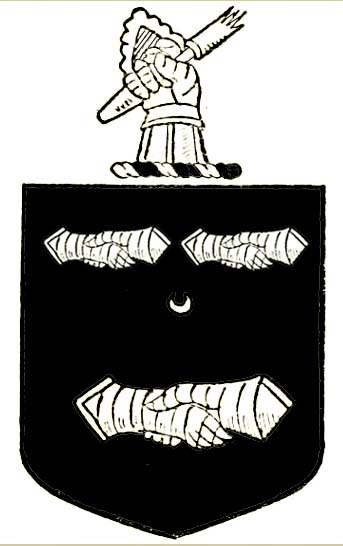 The arms of George Purefoy of Wolvershall, son of Gamaliel Purefoy and elder brother of Arthur of Skreen, as illustrated and tricked in the 1682-1683 Visitation of Warwickshire, with a crescent for difference. The crescent, indicating a second son or a branch descended from a second son, may relate to the branch of Wolvershall being the second most senior line to that of Caldecott, following the death without issue of John of Whitacre, second son of Michael of Caldecott. The senior line descended from John’s elder brother William of Caldecott and the next most senior line from John’s younger brother George of Wolvershall. His crest was shown as a dexter gauntlet erect holding a broken tilting-spear or lance. The armed hand in the crest was tricked as Argent but no tincture was given for the broken lance, suggesting that all may have been Argent. No motto was given.

Cadogan Rothery remarked on the arms of De la Foy, who bore arms of two arms in chevron, the hands grasping a heart, while one Purefoy, Bishop of Hereford from 1554 to 1557, bore for arms Gules, two arms issuing from flanks, hands conjoined in fess, Argent, between three hearts Or. ‘Later Purefoys and Purfeys varied this by bearing respectively: Gules, three pairs of hands back to back Argent; Gules, three pairs of hands couped and clasped Argent; Sable, six armed hands clasped Argent; and Sable, three pairs of dexter hands couped Or, suffled Argent.’[v]

[iv] Robson, T. (engraver), The British Herald or Cabinet of Armorial bearings of the nobility and gentry of Great Britain and Ireland, Vol. II, Sunderland, Turner and Marwood, 1850.