Of Huguenot (French Protestant) origin, Philip Bigoe established himself in the parish of Lusmagh, then in County Galway, in the early decades of the seventeenth century.[i] He was ‘Maister and owner’ of a glass factory, identified at that time by a local settler as a ‘glasshowse’ at Gloster in Lusmagh and was one of the more prominent locally of a number of minor Protestant settlers of both English and French origin established in that area.[ii] By 1641 he was resident at Newtown Castle in Lusmagh, formerly the property of the O Maddens and then the McCooges.

His property was despoiled and his castle at Newtown, where Bigoe, his family, forty-two settler families and twelve soldiers maintained by Bigoe held out following the Insurrection of 1641, was besieged in 1642 by a force of local rebels and, after twelve days, surrendered to the rebels. Bigoe, afterwards forced to pay a large sum of money to the besiegers, obtained quarter and safe passage for himself, his family and the remaining defenders and settler families.[iii]

‘Philipp Bygo of Newtown in the Kings County’ married Susanna, daughter of another of the name Bigoe, by whom he had two sons and three daughters; Phillip, John, Dorothy, Catherine and Mary. All of his children of his first marriage died young, with the exception of Mary, who married John Eyre, Esq. He marries secondly Bridgett, daughter of Sir George Herbert, Knight and Baronet, by whom he had two daughters, Bridgett, who died young and Catherine who married Gilbert Rossan of Dorra.[iv] Having served as High Sheriff of King’s County in 1662, Bigoe died at Newtown in 1666 and was buried in the church at Birr, Kings County.[v]

The funeral entry in the records of the office of the then Ulster King of Arms gave the arms of this Phillipp Bigo as impaled with that of the family of his second wife. In the dexter half of the shield the Bigo or ‘Beygeo’ arms were tricked as Azure, on a chevron between two mullets in chief and a ferret passant in base Argent, a mullet between two ferrets passant Gules. The sinister half of his shield gives the Herbert arms tricked as Per pale Azure and Gules, two lions rampant in chief and a lion rampant in base Argent.[vi] 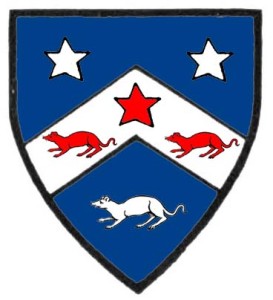 Bigoe arms as given on the impaled arms of Phillip Bigoe of Newtown, from his funeral entry in the records of the Ulster King of Arms.

The Cromwellian Captain John Eyre, married to Phillip Bigoe’s daughter and co-heir, Mary, constructed a mansion to be known as Eyrecourt Castle as the focus of the new estate he amassed in east Galway as a result of the Cromwellian land confiscations. The arms of this John Eyre, founder of the Eyre family of Eyrecourt, were displayed in a prominent position as an armorial centrepiece in the elaborate carved timberwork that framed the staircase in the entrance hall at Eyrecourt Castle. In this instance the arms of this John Eyre were shown impaled, with that of Eyre in the dexter half and that of Bigoe in the sinister.[vii] 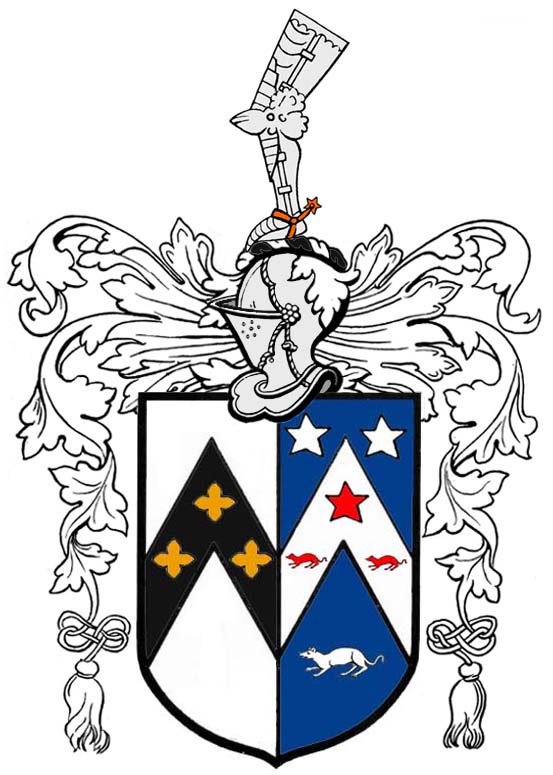 Arms of Captain John Eyre of Eyrecourt Castle (d. 1685), displaying those of Eyre impaled with Bigoe, a carved representation of which was placed above the staircase in the entrance hall at Eyrecourt Castle.

For further details relating to this family, refer to ‘Bigoe’ under ‘Families.’