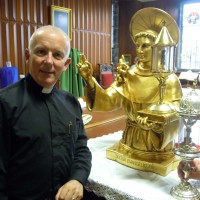 The traders who had the foresight to set up stall at the Cathedral gates must have made a fortune selling lilies in Galway this morning. Today the relics of the celebrated St. Anthony of Padua were brought to Galway Cathedral for veneration and the florists at the gate, mindful of the flower’s long association with the saint, did a more than brisk trade in lilies, purchased by the devout to place before the saint’s reliquary. 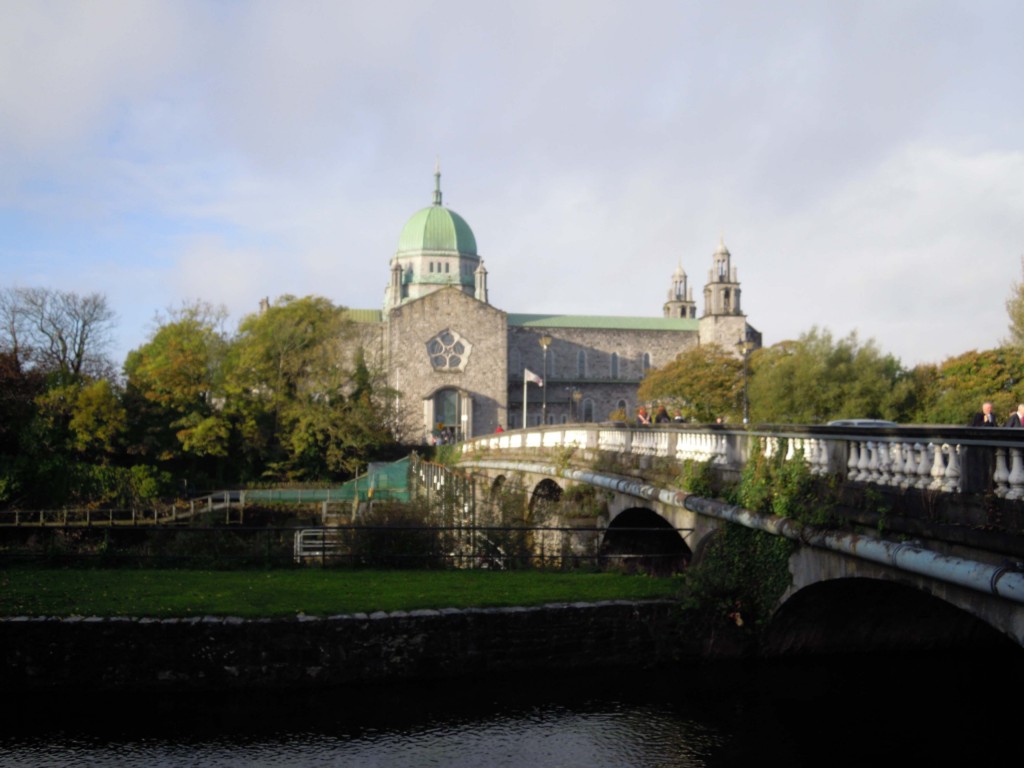 The Cathedral of Our Lady Assumed into Heaven and St. Nicholas, better known as Galway Cathedral, with the Salmon Weir Bridge in the foreground.

The relics of St. Anthony are being put on display for veneration in six locations about Ireland this month, in a tour of Ireland and the United Kingdom to commemorate the 750th anniversary of the discovery by St. Bonaventure of St. Anthony’s incorrupt tongue among his remains when his body was exhumed. I had the privilege of serving as one of the stewards at the reception of the relics into Galway Cathedral and I have to say I enjoyed myself immensely. 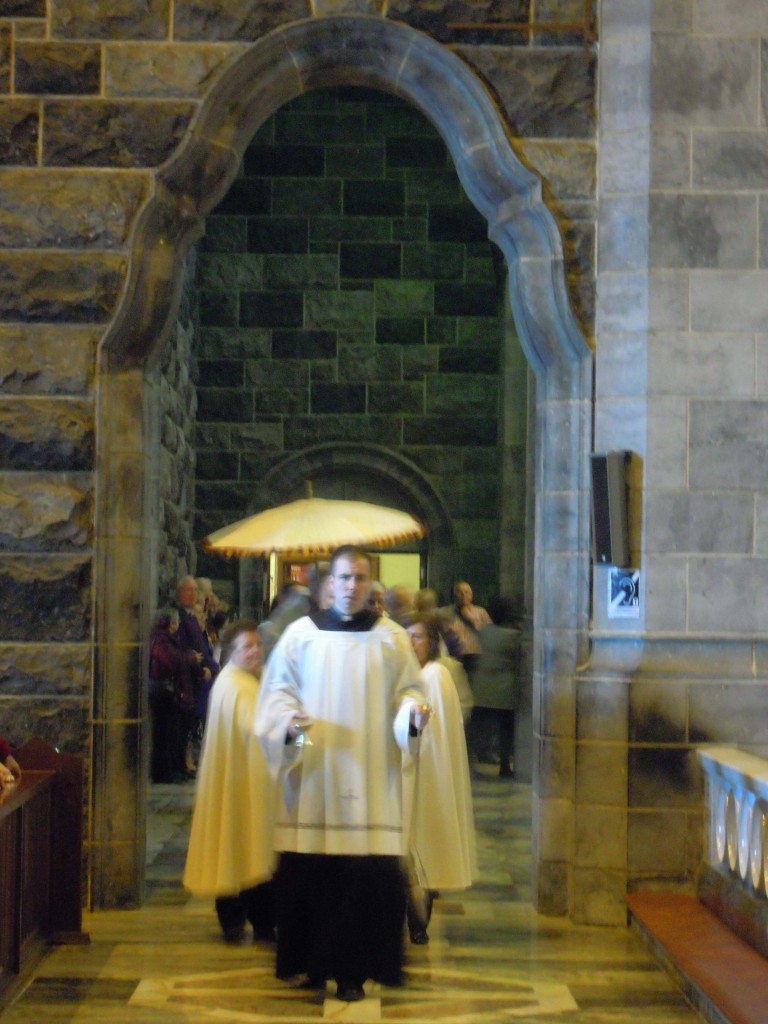 Rev. Martin Whelan C.C. leading the procession of the relics  and clergy from the sacristy at the beginning of morning mass.

The relics, a small piece of petrified flesh and layers of skin of the saint’s cheek, were displayed in two reliquaries, brought out in procession after eleven o clock mass over which Most Rev. Martin Drennan DD, Bishop of Galway and Kilmacduagh presided. Fr. Mario Conte OFM, a Conventual Friar of the Basilica of St. Anthony at Padua, who travels with the relics, delivered the sermon.

I’m not always the best to recall the details of a sermon but one brief anecdote in particular stayed with me.

Fr. Conte was in Carlow with the relics a number of years ago, where an elderly lady with a deep devotion to St. Anthony, after venerating the relics, was interviewed by a journalist on leaving the church. The reporter asked her why she came and she responded that she was visiting her dear friend St. Anthony. The reporter retorted that surely the saint had been dead for several hundred years at this stage. The lady paused. ‘Yes’ she replied, ‘but love lives on.’

Applying the anecdote to the occasion, Fr. Conte went on to explain that the veneration of relics is not about superstition or the adoration of objects but rather the relic is regarded as ‘a connection of love, between the venerating person and the saint.’ He added that he carries with him his own mother’s wedding ring, too small for him to wear, but, in a similar way, it too serves as a connection of love between him and his departed mother, who is made more present to him upon his contemplating the ring. His sermon was simple, direct and effective, in the true tradition of the preaching St. Anthony. 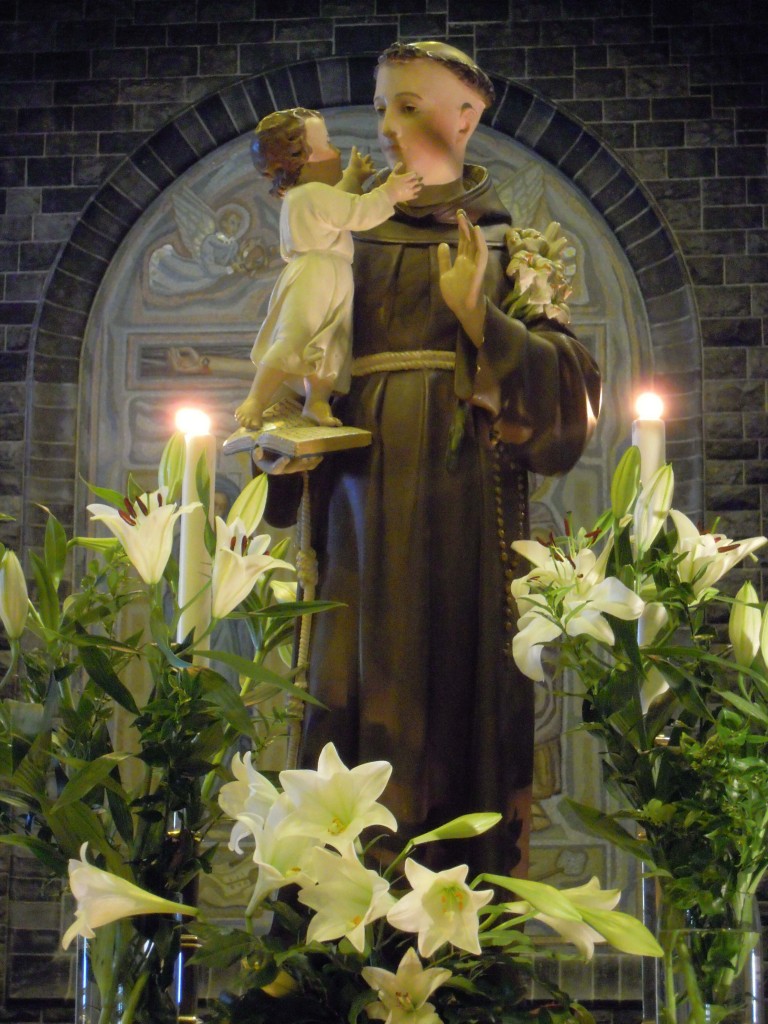 The statue of St. Anthony of Padua, surrounded on the sanctuary by lilies. The lily, a symbol of purity, has a long association with Saint Anthony. One story relates that a cut lily placed in the hand of a statue of the saint in Austria in 1680 remained alive and fragrant for a year and in the following year grew more blooms, while in the 1780s, in a church in Corsica, cut lilies were reputed to have remained in bloom for months.

The patron saint of the lost and an object of popular devotion, St. Anthony was born of noble parents in 1195 in Lisbon and baptised Fernando de Bulhoes. In his youth he entered religious life as an Augustinian and was ordained a priest. Inspired by the selfless sacrifice of five early Franciscan martyrs, he later joined the Franciscans, took the name of Anthony and became an early follower of St. Francis of Assisi. He proved an effective and tireless preacher, with an extensive knowledge of the gospels. Crowds of 30,000 were said to have attended his last sermons in Padua in Italy prior to his death as a result of dropsy in 1231. About eleven months after his death he was canonised, the swiftest canonisation process in the Catholic Church. In 1946 he was declared a Doctor of the Church by Pope Pius XII.

I also only discovered for the first time tonight, that it was not unusual until very recently for people to write the initials ‘S.A.G.’ (Saint Anthony Guide) on envelopes in the hope of the letter reaching its destination. At once a pious gesture and a damning indictment of the postal service but the touching story behind this, involving an eighteenth century Spanish merchant and his wife, too long to relate here, is worth reading. 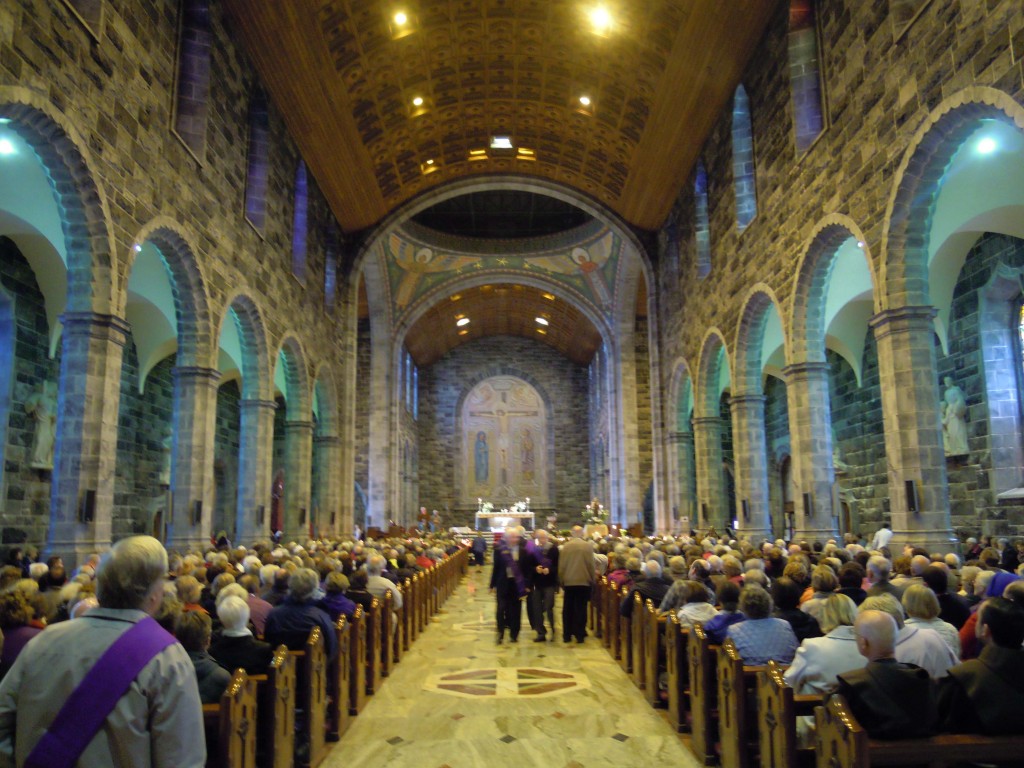 Stewarding on an occasion such as this gives one a unique insight into the sheer weight of numbers of those who travelled to venerate the relics. The Cathedral was full to capacity for the morning mass, with quite a few standing in the aisles. The weight of numbers was such that stewarding proved initially difficult in the early stages but order prevailed under the guidance of Fr. Martin Whelan, curate at the Cathedral and Diocesan Secretary. 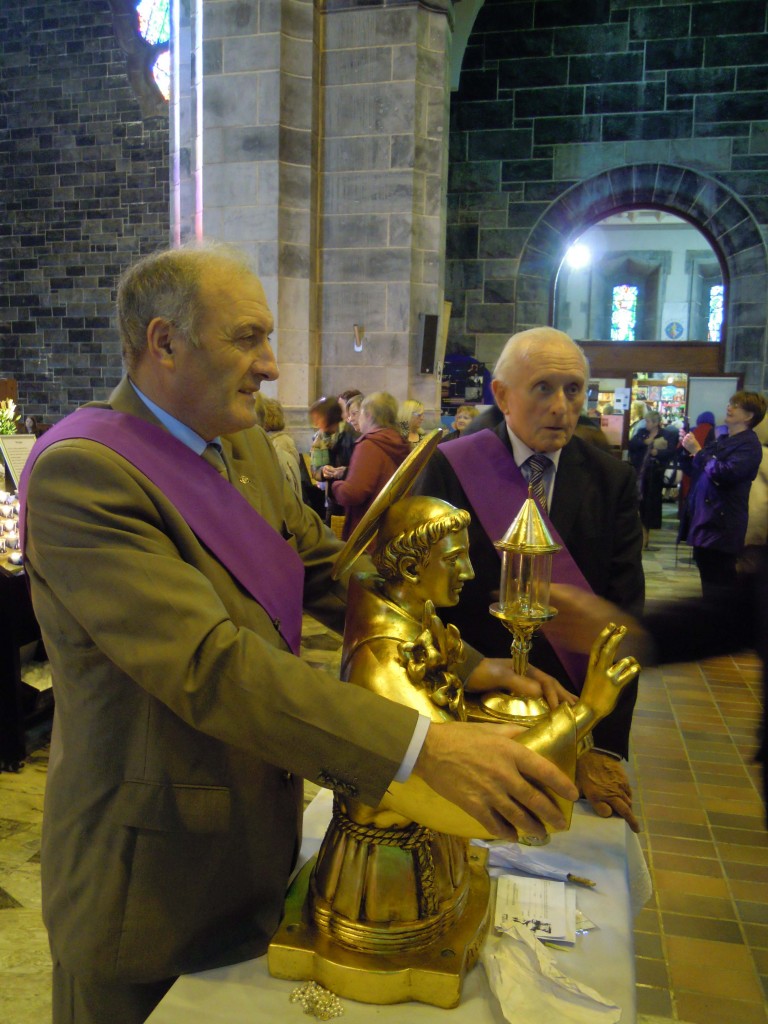 Stewards Bernard and Bartley on duty with the reliquary of the saint in the main aisle of the Cathedral. 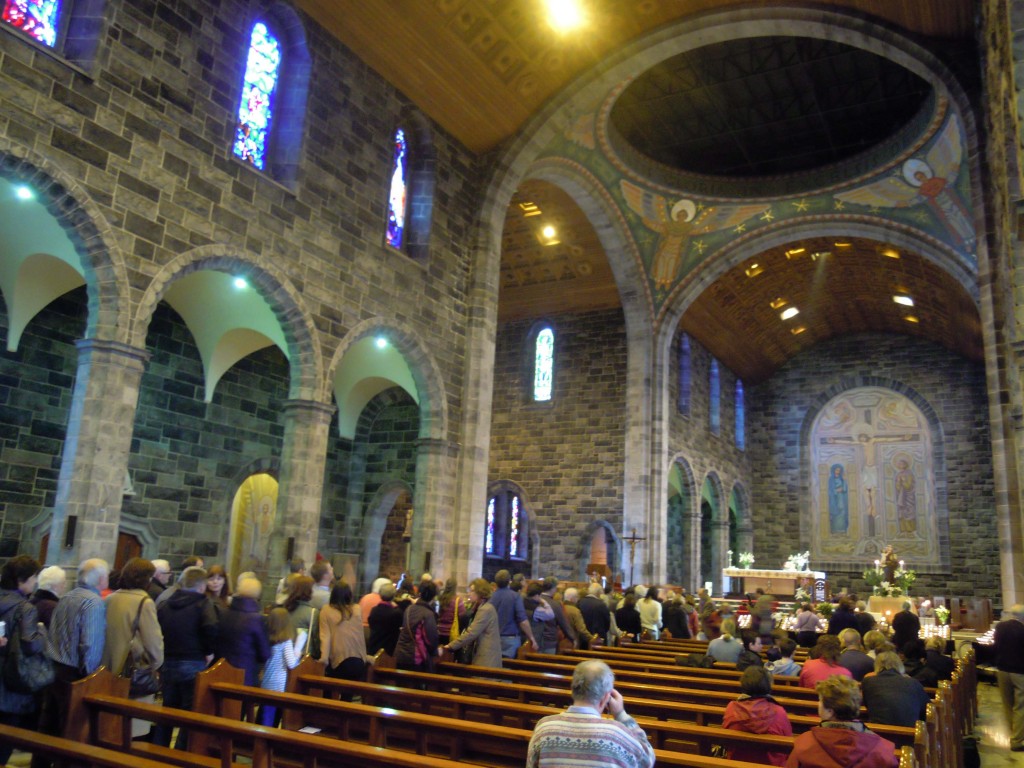 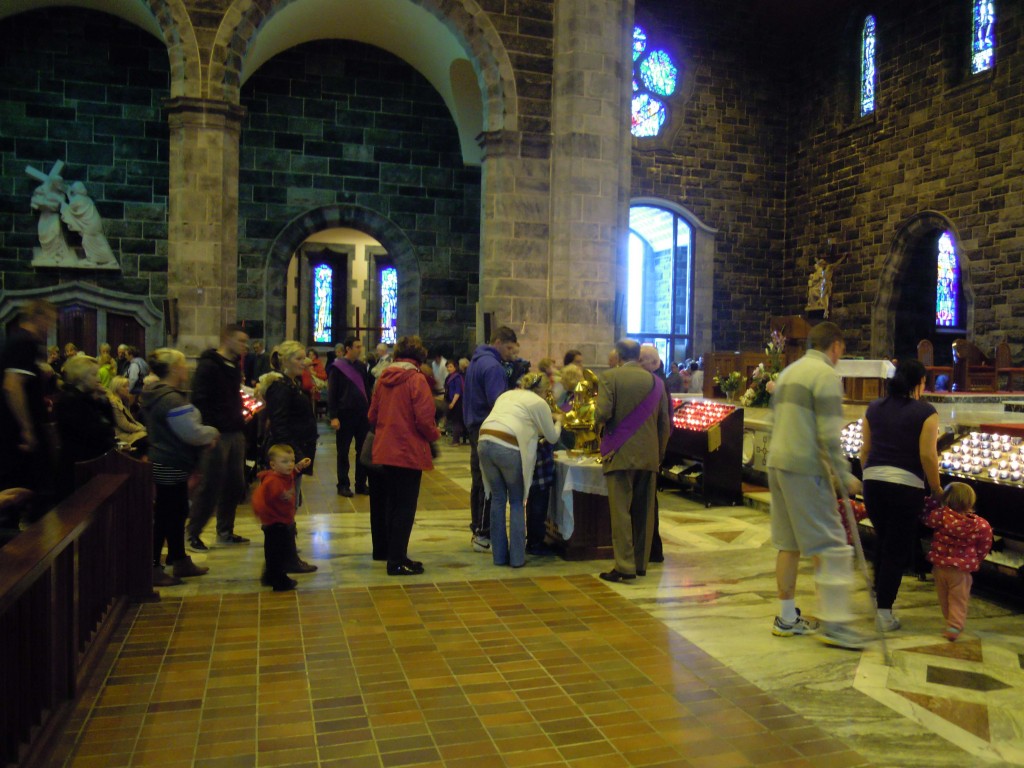 The queues for both relics were both dignified and constant throughout the day, interrupted only for the celebration of mass at six o clock in the evening. 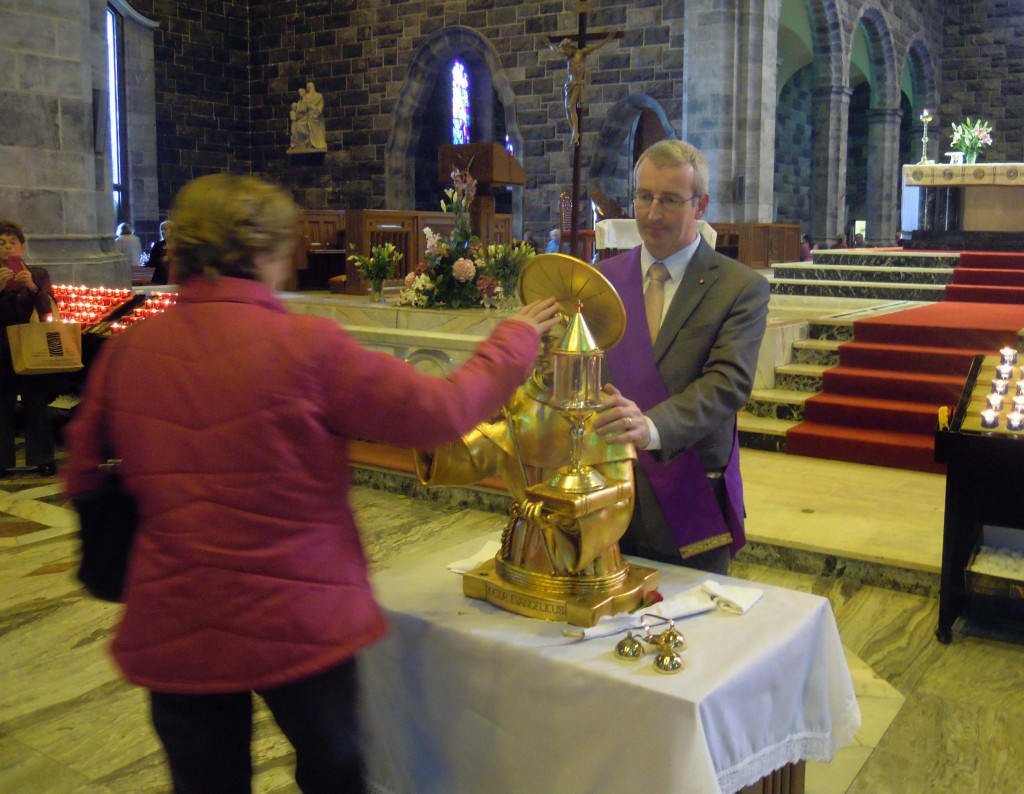 For much of the afternoon I found myself supporting the reliquary before the altar as the faithful queued patiently down the main aisle. The queue was unceasing. I stayed with the relic until six o clock mass, when Bernard Finan, one of the most experienced of the stewards, came and suggested that we take the reliquary back to the sacristy for the duration of evening mass, whereafter it would be brought back out in procession again. Only then, as we went to lift the reliquary, did I realise that I had been standing in the one spot for so long and my legs had become so stiff, that they almost buckled under the weight of the reliquary.

Always in good humour and gracious, Rev. Michael Byrne JCL, priest of the diocese of Clonfert and Judical Vicar with the Marriage Tribunal in Galway, with the relics of St. Anthony prior to his celebration of six o clock evening mass. 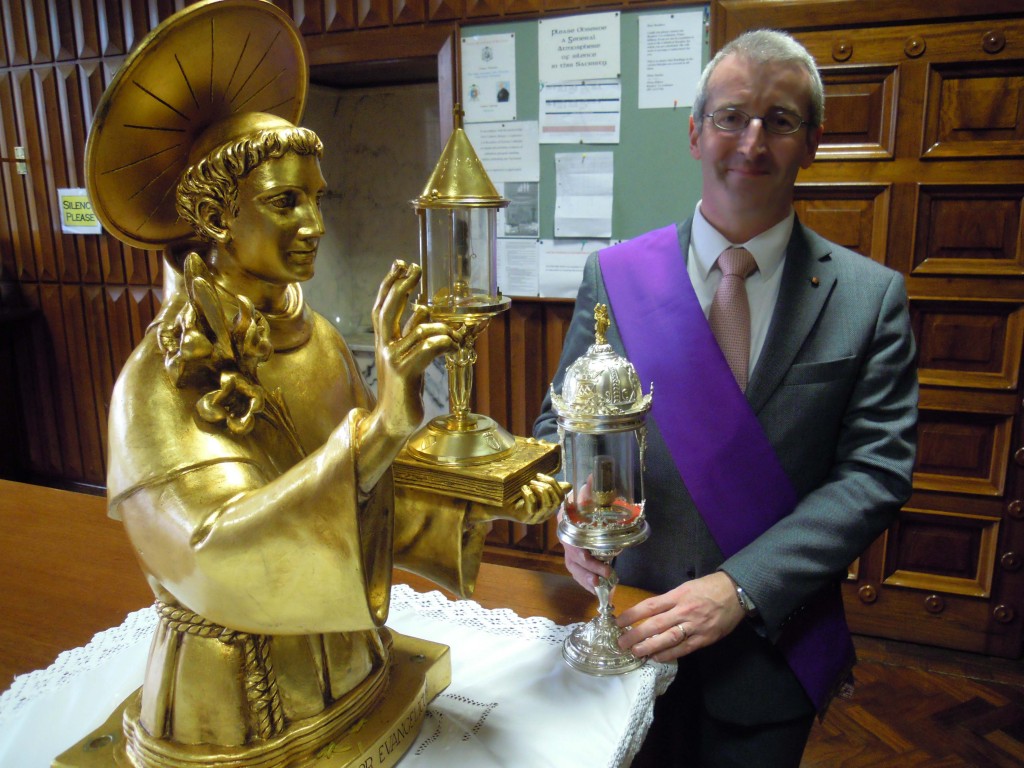 The author with both reliquaries in the sacristy prior to six o clock mass.

While the relics would remain on display until ten o clock at night, I had to leave at six. As I sat impatiently in the car on the way home, stuck in heavy traffic in the dark and pouring rain, it struck me that, unusually, the traffic was as heavy entering the city as leaving, a result, no doubt, of the additional numbers making their way after work to the Cathedral and St. Anthony.

Sitting there, motionless, I realised two things. Firstly, there is no shortage of devotion to popular relics among the Catholics of Ireland, with all ages represented in the endless queues and secondly, that the least stewardable of people in a crowd have to be certain determined little elderly ladies, intently focussed on reaching their destination, by hook or by crook, by the shortest route possible.