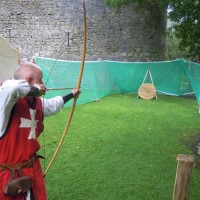 For generations the townspeople of Athenry and the surrounding community have celebrated the Feast of the Assumption of the Blessed Virgin Mary (15th August) as pilgrims. On this feastday, known as ‘Lady Day’ hundreds undertake the short pilgrimage to a holy well on the eastern outskirts of the town, known as ‘Lady’s Well,’ culminating in the celebration of mass at the site. The origin of the pilgrimage is lost in time but local tradition holds that it dates from the medieval period.

Respect for significant religious feastdays has a long tradition in the area. The town of Athenry was developed by the Anglo-Normans in the years immediately following their 1235 conquest of Connacht. In 1249, only eight years after Athenry had received a grant to hold a market, the sons of the O Connor king of Connacht, with their Gaelic allies drew down upon the fledgling town about the feastday of the Nativity of the Blessed Virgin Mary (8th September) threatening to burn and pillage before them. The Anglo-Normans in the town sought a truce because of the sanctity of the feastday, but the O Connors refused and attacked the town. When the Anglo-Normans, led by the Sheriff of Connacht, sallied out from the town to meet them, the Irish annalists record that the sight of the men in arms and armour filled the O Connor’s followers with such dread that they were put to flight. The ensuing defeat of the O Connors and the salvation of the town were attributed by the same annalists to a miracle brought about by the intercession of the Blessed Virgin. 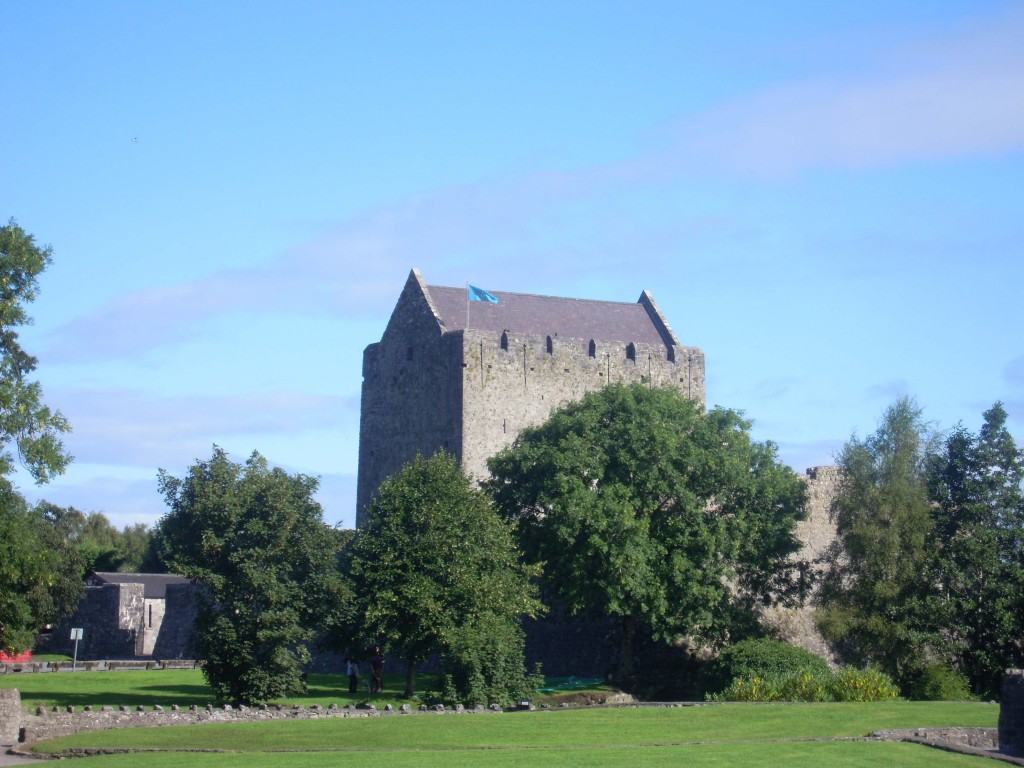 The castle of Athenry, viewed from the south. The upper floor and roof above are later additions to the original mid thirteenth century structure.

Although there is no clear connection between the assault of 1249 and the local pilgrimage tradition on the feast of the Assumption, it is nice to see that seven hundred and sixty four years later the townspeople and local pilgrims still maintain this pilgrimage and tradition of devotion to the Blessed Virgin.

This year the feastday fell upon Thursday and commenced a four day festival, promoting the culture and heritage of the locality, concluding on Sunday (National Walled Towns Day) with a display of medieval and late medieval life. As I arrived the lawn in front of the castle was filling with tents and stalls, medieval music played in the castle, longbow and medieval weaponry and craftwork were being demonstrated on the lawn while a children’s jousting workshop was being organised, where they could make their own helmet and test their jousting ability against a suitably sized and padded target. 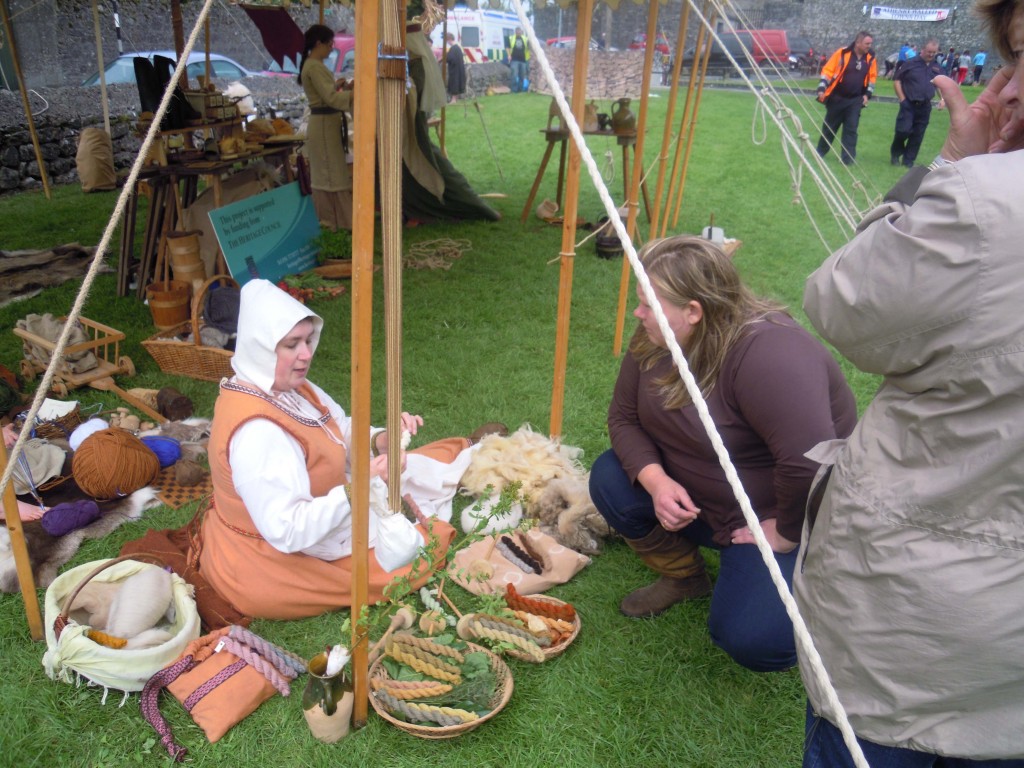 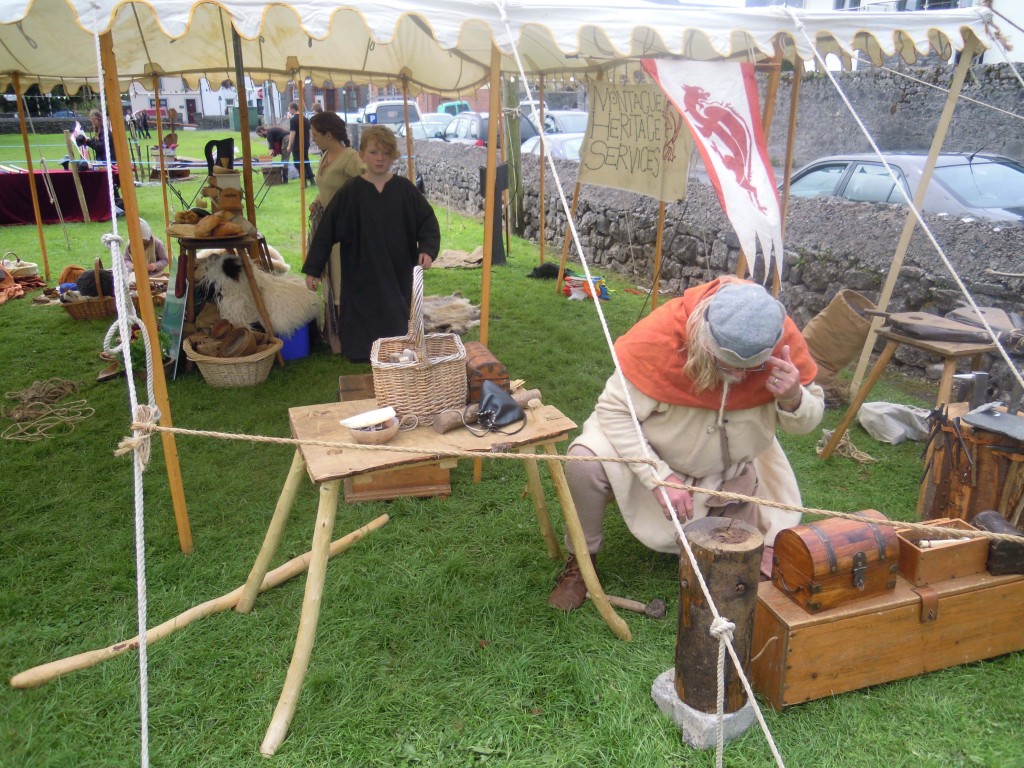 ‘Montague Heritage Services’ display of medieval crafts at this stall on the lawn. 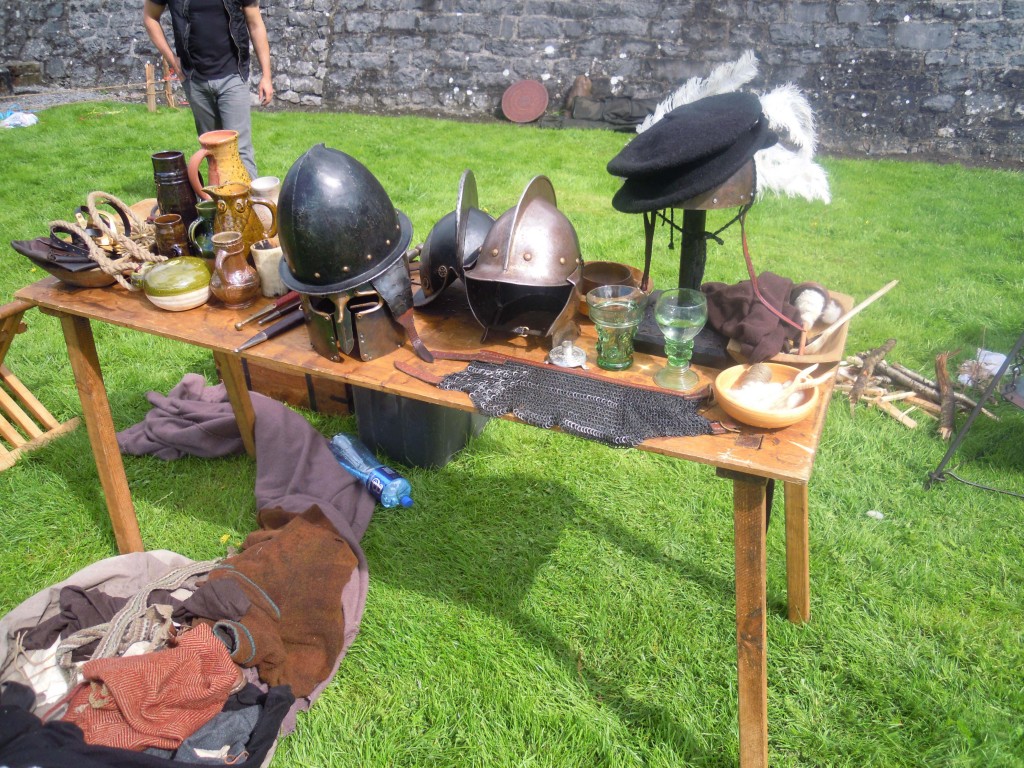 Display of arms, armour and crafts by ‘Claíomh.’ 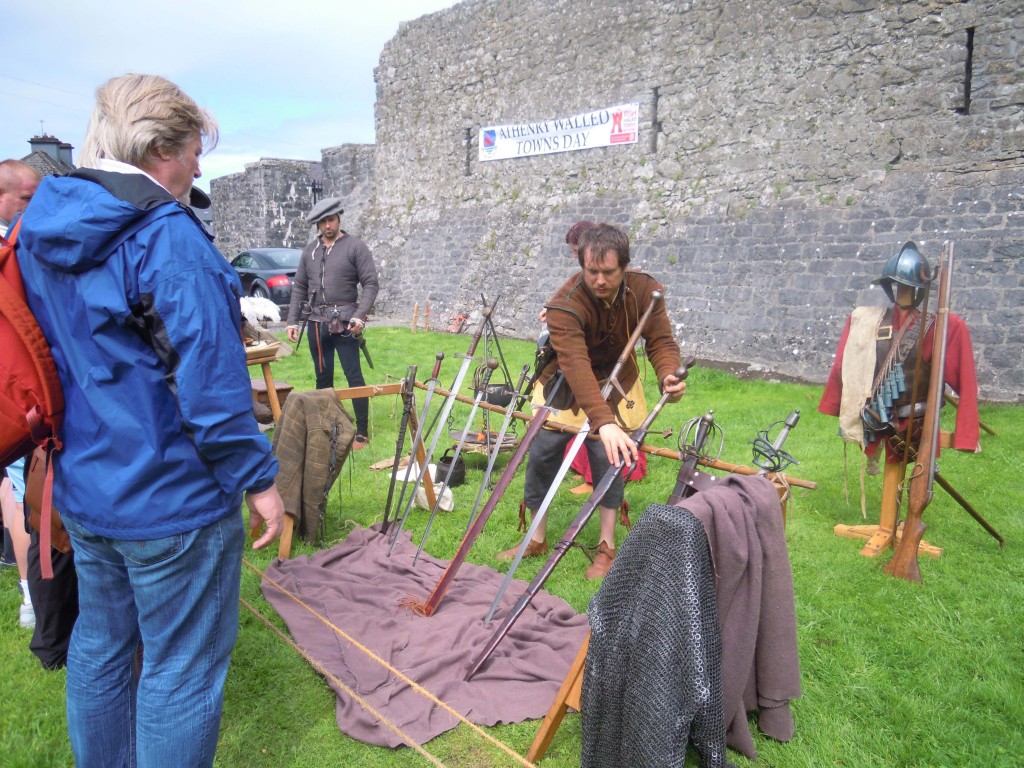 I arrived early and after a brief re-visit to the castle, found myself chatting with members of a ‘living history’ group called ‘Claíomh’ (the Irish word for ‘sword’) who recreate a live and authentic image of Ireland’s medieval past. With a background in archaeology, their aim is to spread awareness of Ireland medieval and early modern history and archaeology through public displays of sword-fighting and battle demonstrations, crafts and educational talks using reconstruction resource materials. They also provide historical consultancy and also involved in media work, film and television productions. It’s a field I know little about but its worth having a look at the websites of both ‘Claiomh’ and ‘Montague Heritage Services.’ 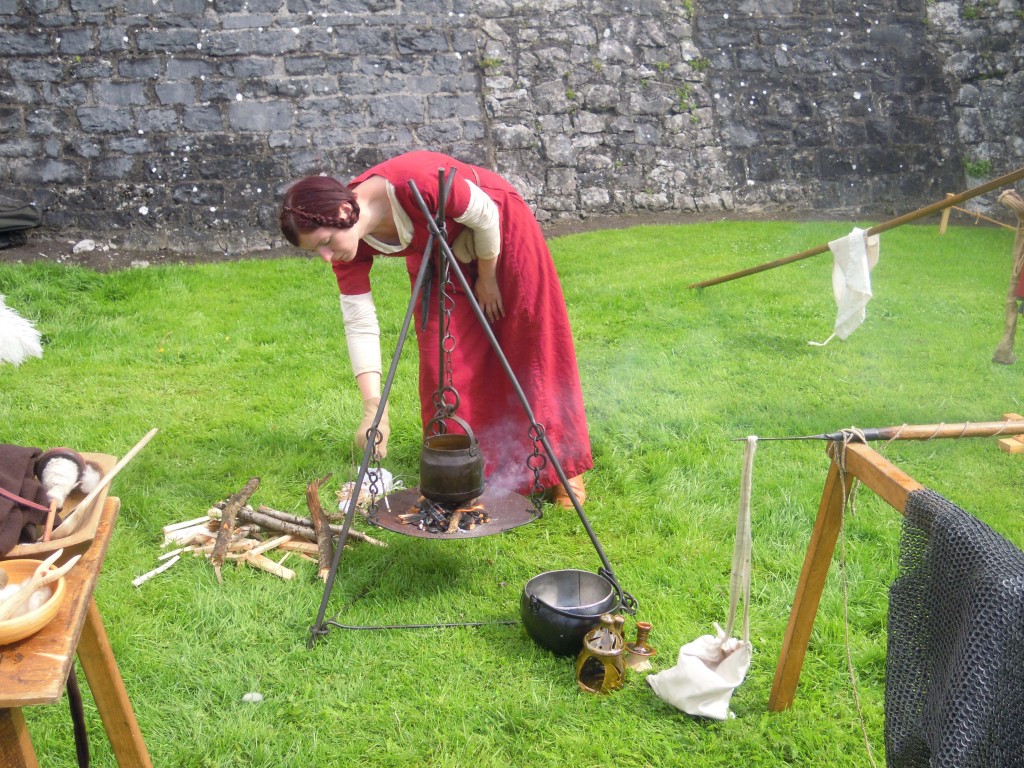 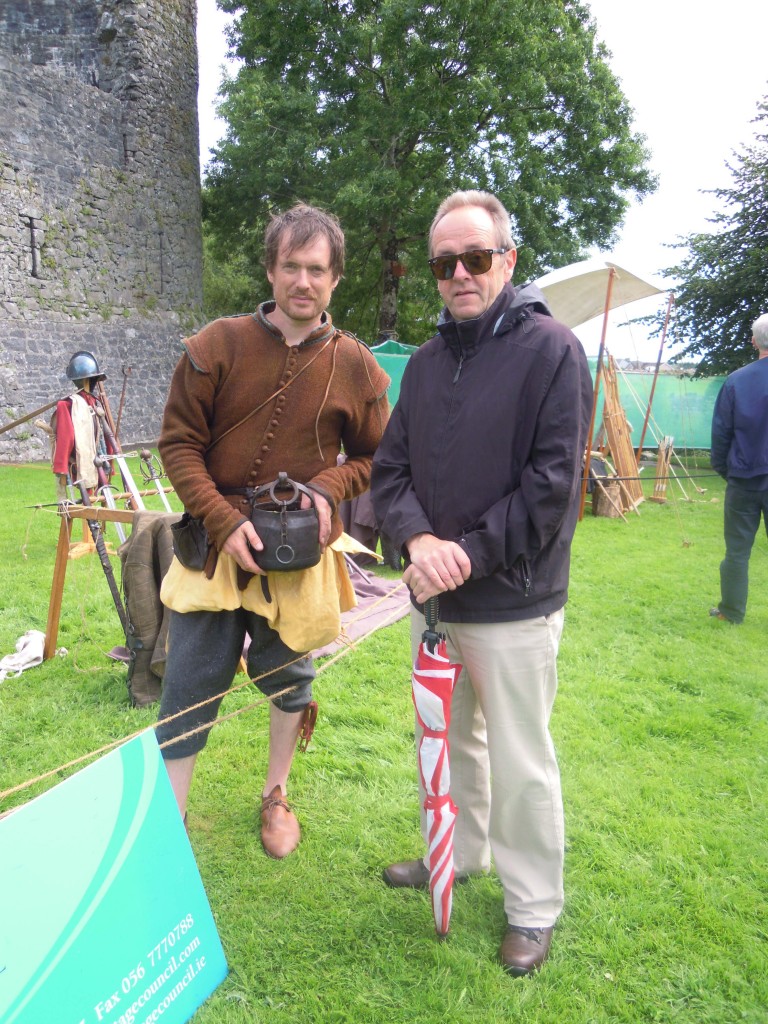 Dave Swift of ‘Claíomh’ chatting with Charles Taylor, (known to all as Cha’ Taylor), an expert archer, member of the Ard Rí Archery Club in the town, a talented musician and a distant relative of mine on the maternal side whose family came to the town in the late nineteenth century. The Taylors owned the local corn mills, once sited beside the river in the background of this photograph. Their family house, known simply as ‘Athenry House’ still stands at the centre of the town, within the remains of the medieval town walls.

In previous years Cha’ was involved with archery demonstrations at the festival but this year that task fell to Dave Hodson, who is based in County Leitrim where he makes wooden bows and accessories. He offers coaching and attends events around the country, demonstrating the craft of bow-making using traditional tools and methods. 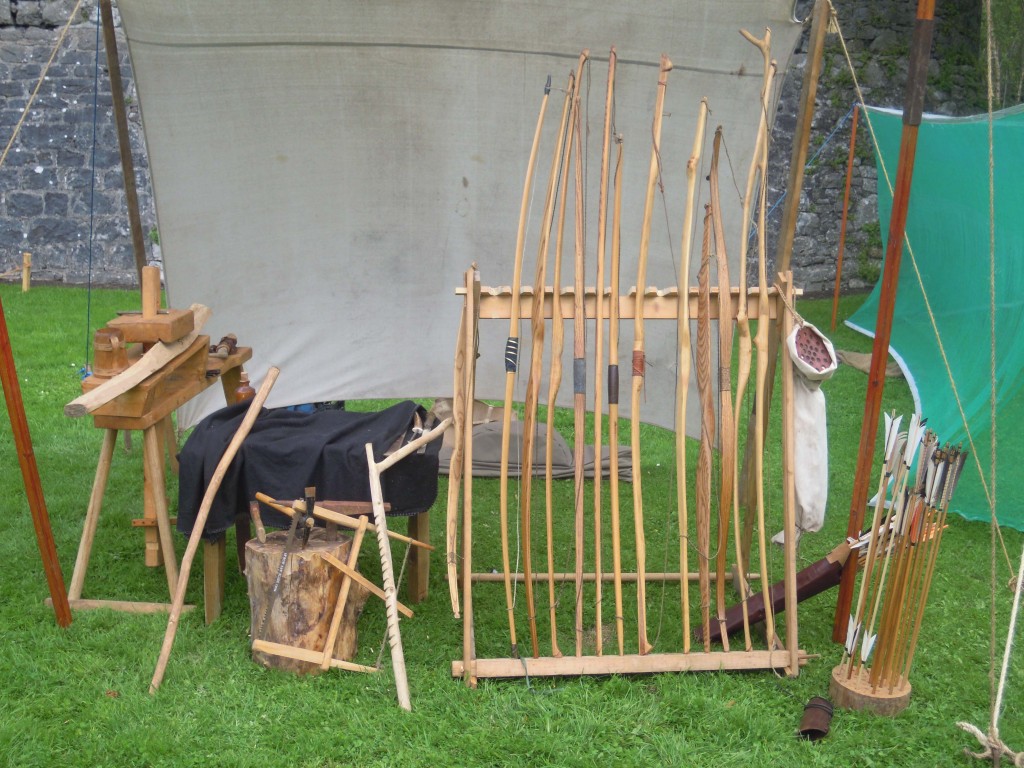 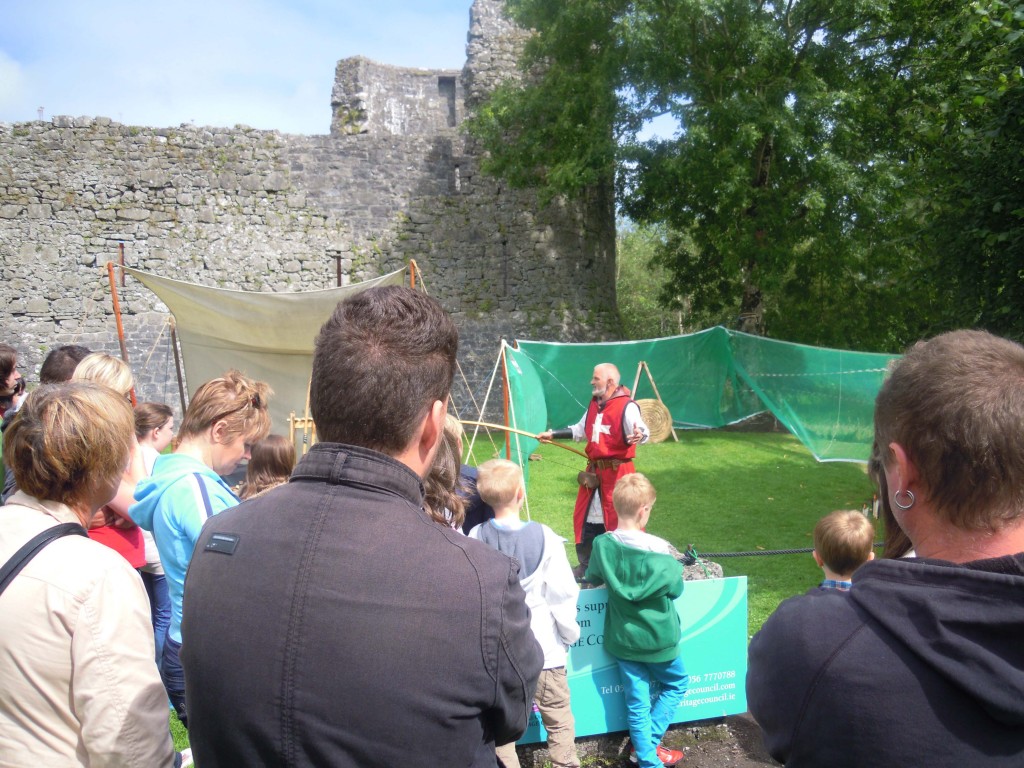 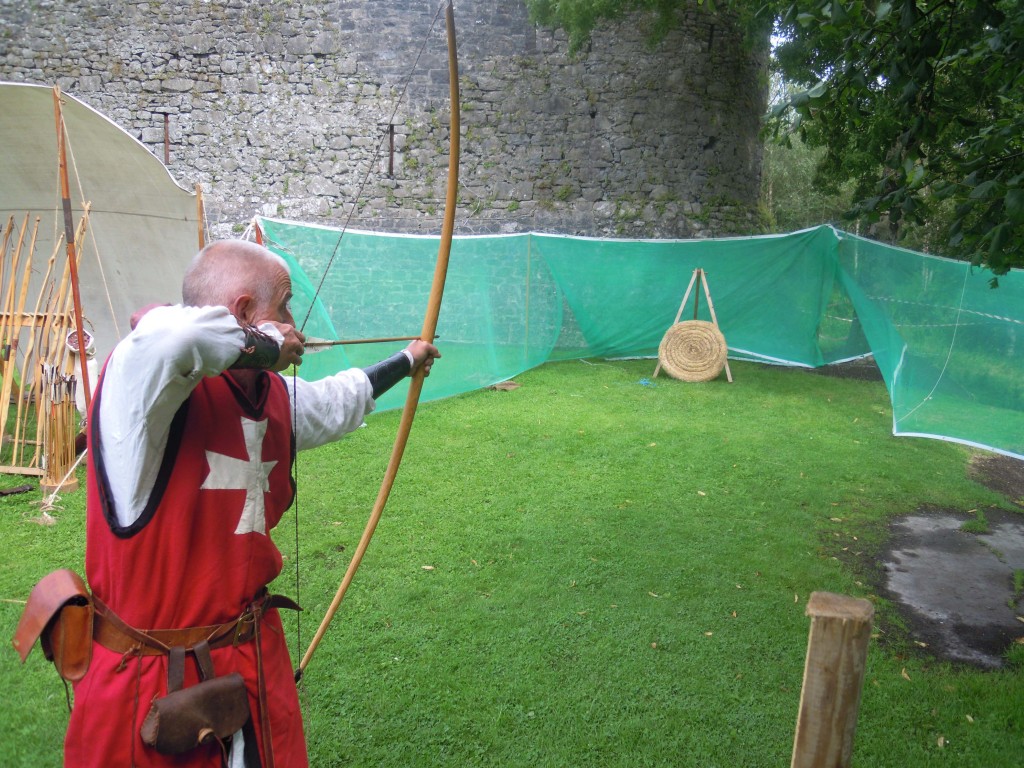 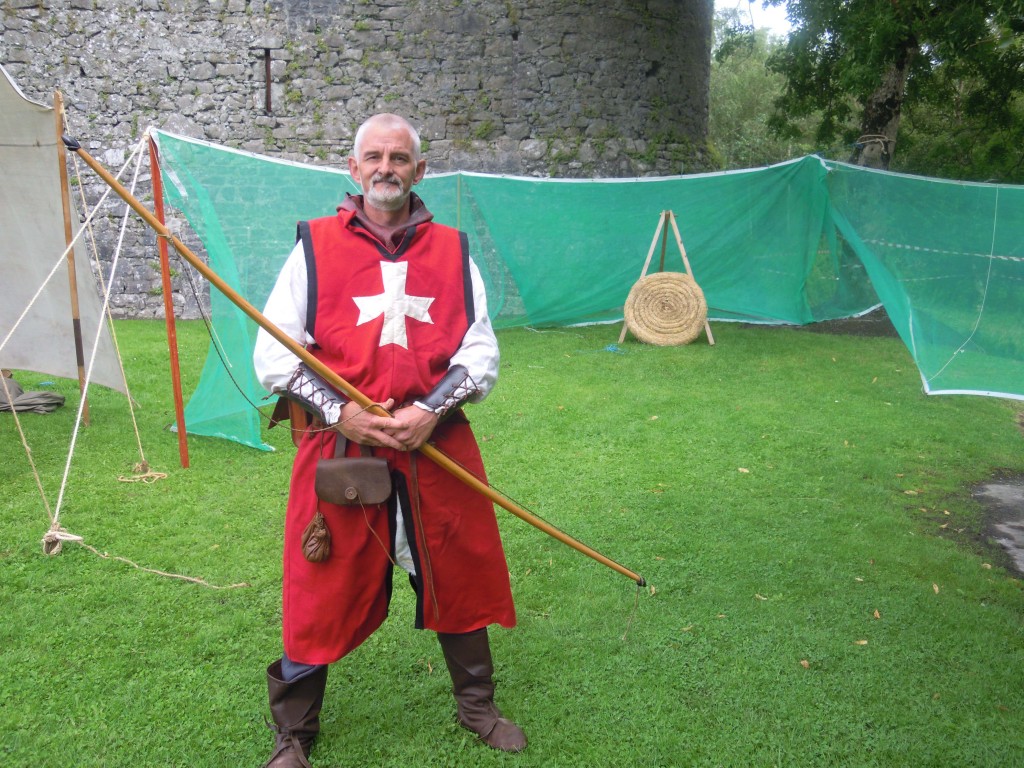 Dave Hodson of MirCat Manufacturing, craftsman and archer, in front of the south tower of Athenry Castle.

You can read more about the architecture and history of Athenry Castle in the ‘Architecture’ section of this website.